Sudan heads toward historic but shaky vote for president

JUBA, Sudan | Sudan’s first multi-party presidential and parliamentary elections in 24 years are set for April 11, but with just days to go, the main opposition presidential candidate has withdrawn from the race, throwing the legitimacy of the election into question.

The elections are mandated under the 2005 Comprehensive Peace Agreement, which ended two decades of civil war between the primarily Muslim and Arab-speaking north and rebels in the south. Another requirement of the CPA is a referendum in January 2011 in which the south will decide whether to split from the north.

But this month, when voters go to the polls from April 11-13, they will decide on the president of Sudan, National Assembly, president of the semi-autonomous Government of Southern Sudan, Southern Sudan Legislative Assembly and governors and assemblies for Sudan’s 25 states.

On Wednesday, one of the main challengers to President Omar al-Bashir — Yassir Arman, a northern Muslim who joined the Sudan People’s Liberation Movement — announced he was dropping out of the race.

The formerly southern rebel SPLM, now in a coalition government with Bashir, alleges that Bashir’s National Congress Party is rigging the elections in its favor, which the government denies. The SPLM also says ongoing security problems in the Darfur region of western Sudan are preventing their candidates from participating in elections there.

U.S. Sudan envoy Scott Gration flew to Khartoum the day after Arman’s withdrawal to meet with opposition leaders and members of the government. And Reuters has reported that other opposition parties, including the Democratic Unionist Party and Umma party, have said they also are withdrawing from the presidential race and possibly other contests for parliament and governorships as well.

“We’re troubled by any decision that reduces the competitiveness and credibility of these elections, but the situation is very fluid, and Scott Gration is there and actively trying to determine more details about the decision by these opposition parties,” said Assistant Secretary of State Philip J. Crowley at a press briefing on Thursday. 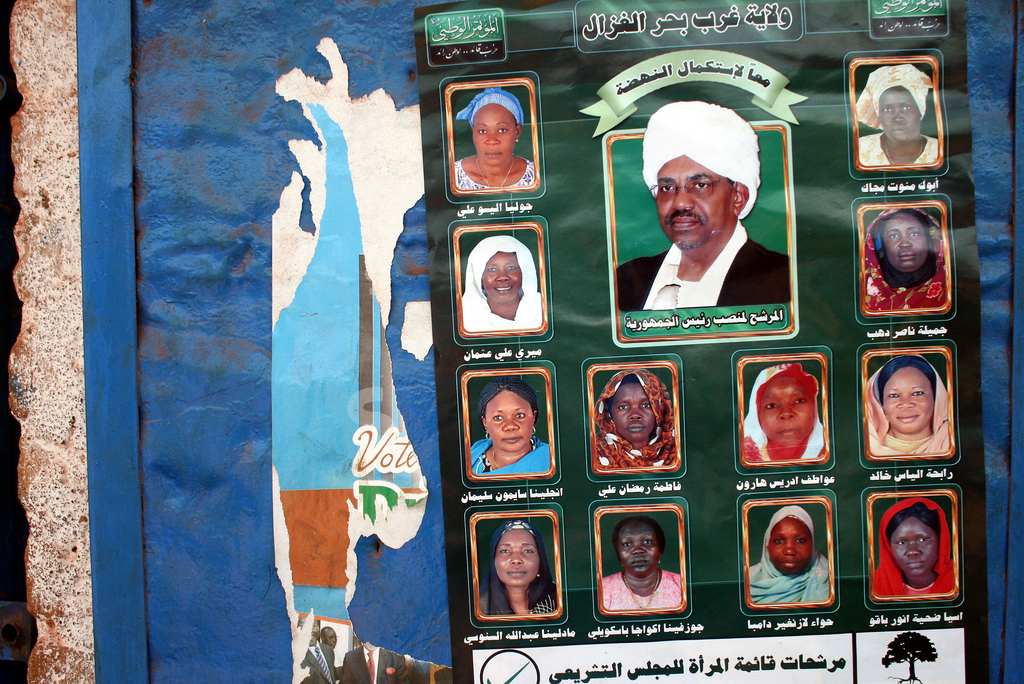 A 2010 campaign poster for the National Congress Party showing all female candidates with President Omar al-Bashir as the centerpiece. Photo by Larisa Epatko

Some opposition leaders have called for a four-week delay in the elections, which the government in Khartoum opposes.

“It would not be fair to postpone the election,” although the government would abide by the recommendation of the National Electoral Commission, said Sudan’s Ambassador to the U.S. Akec Khoc in a recent interview. “If the election is delayed until November, it would not give sufficient time for the preparations for the referendum,” now scheduled for January, he said.

“We hope there will be no postponement of the referendum for that is one of the factors that could lead to conflict, violence,” Khoc said. “Elections are meant to democratically transform a country through having a multi-party, all-inclusive process. This is what we are trying to do in Sudan.”

Current President Bashir came to power in a military coup in 1989, and was elected president as the only candidate to run by law in 1996 and then re-elected in 2000 in a contest that the opposition boycotted. Under the 2005 peace accord between the Khartoum government and rebels in the south, led by the Sudan People’s Liberation Movement/Army, he was named president again.

Bashir faces charges by the International Criminal Court over alleged war crimes in Darfur, where fighting between rebels and government-aligned militias have killed an estimated 200,000 and displaced at least 2.5 million since 2003. Bashir has dismissed the ICC as a political rather than judicial court, and has said the number of those killed in Darfur is more like 10,000.

In January, Bashir retired as commander-in-chief of the armed forces, according to state-run media, in a procedural move ahead of his official nomination by the majority National Congress Party.

A candidate must receive 50 percent of the vote to avoid a run-off with the second-place finisher. 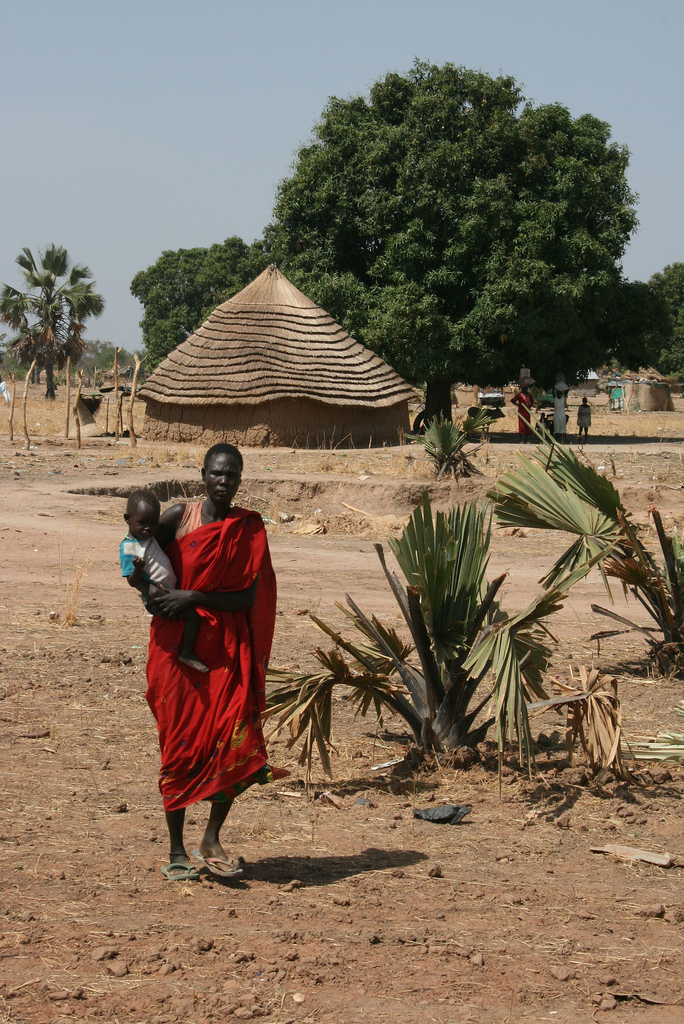 A mother and child in Warab state in southern Sudan. Photo by Larisa Epatko

Many Sudanese will be voting for the first time in the elections, including Sunday Roseline Henry, a 31-year-old resident of Yei in southern Sudan, who said she is excited but tentative about the vote.

“I just want, really, this election to happen to choose a leader who will speak on behalf of the people and come back to the villages, not just sit in their office in Parliament,” she said.

Khamis Cosmas Lokudu, 25, a student and volunteer with the Rule of Law Promoters Association in Association in Juba, said he also is looking forward to his first election but is concerned that violence might break out after the vote. “Here, it is going to be a problem, because the losers don’t accept the results.”

Officials who get voted out of office might cause trouble as well, he said. “It’s like the office is like a kingdom” that they don’t want to give up.

An election without signs of major fraud will go a long way toward preventing violence, Sudanese and regional analysts have said.

International monitors will help oversee voting at polling sites around the country. The European Union is sending 130 observers to Sudan. Other organizations and countries, including the African Union, Arab League, Intergovernmental Authority on Development in Eastern Africa, and China and Japan, are planning to deploy monitors, in addition to Sudan’s own election observers.

One of the U.S.-based organizations heading to Sudan, the Carter Center, is planning to dispatch a team of monitors that will be smaller than the EU’s though the exact number hasn’t yet been determined, David Carroll, director of the center’s Democracy Program, said on Friday.

“This is a very important election in that it represents a potential transformation for Sudan in terms of the prospects for a political opening and the implementation of the Comprehensive Peace Agreement, including — following these national elections — a referendum in January 2011,” he said.

Because voting is new, Sudanese civil society organizations have mobilized to help people understand how to register and vote in the complex elections: in the north, voters will have eight ballots and in the south voters will have 12.

Although voter registration in November and December was largely peaceful, there was confusion among some communities over where constituency lines are drawn and which candidates they are voting for, along with even where they should vote, said Edmund Yakani, coordinator for the Sudanese Network for Democratic Elections.

Polling stations are being consolidated, so where people registered to vote might not be where they cast their ballots in April, he explained. 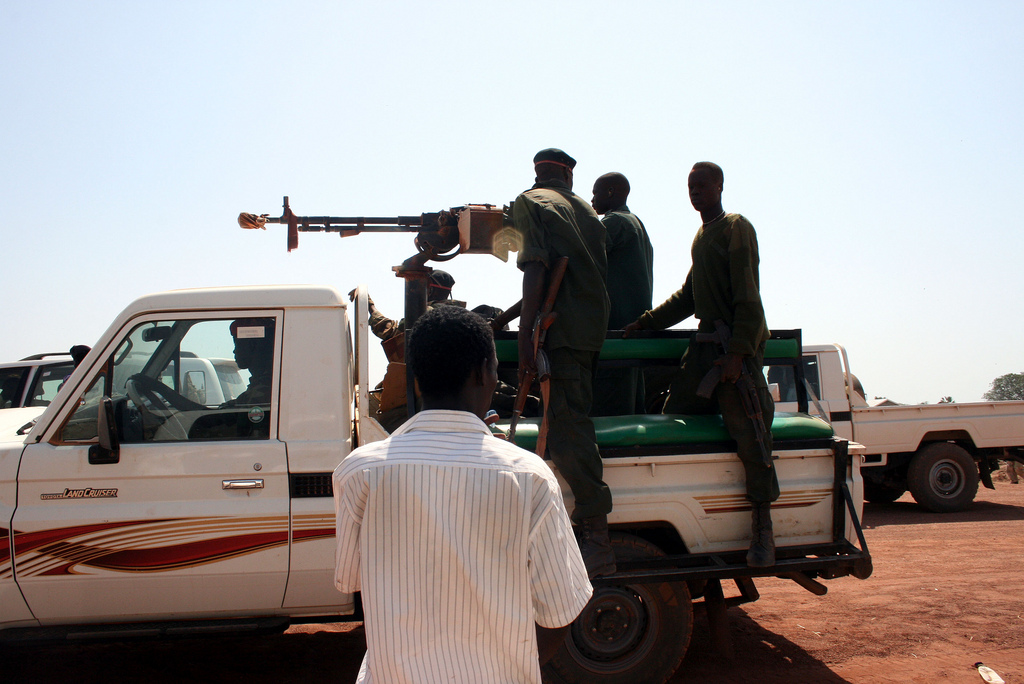 Paramilitary members ride in the back of a pickup truck in Warab state in southern Sudan. Photo by Larisa Epatko

Also, rumors are circulating that parties might be paying for votes, said Yakani. In other words, people would hand over their receipts allowing them to vote to other parties, who are looking to reduce the number of votes for their competitors.

Henry, the Yei resident, said she has heard those rumors.

“I’m feeling a bit afraid because it’s like most of the people will be just convinced because of money,” she said. “Those who are campaigning who have money, they will win.”

Intervening when there are rumors is beyond the jurisdiction of the domestic election monitors, said Yakani, so his organization has been urging political parties to deploy their own agents to see if the rumors that other parties are buying voters’ receipts are true. Then, the parties should report their concrete evidence to the National Electoral Commission, which has the responsibility to uphold the code of conduct among the parties, he said.

“We have experienced in Kenya how rumors promote violence,” Yakani continued. “So the parties need to be responsible to ensure that elections are under a peaceful situation so at the end of the day they don’t jeopardize the lives of the citizens.”

Another challenge is to organize the participation of many Sudanese who have been displaced by the decades of fighting in the south or in the western region of Darfur. Residents of the south have been trickling back home since the Comprehensive Peace Agreement was signed in 2005, but scores of Darfur residents are still living in refugee camps.

Other hurdles include ensuring enough voting materials are available, said Yakani, and the country’s low literacy rate, which is 61 percent among the total population, according to the CIA World Factbook.

Despite the potential problems and risk of violence, Lokudu from Juba said he feels a sense of national pride during this voting period. “I am happy since this is my country,” he said.

Left: A stall selling clothes also displays a poster for Salva Kiir Mayardit, who is running for president of South Sudan. Photo by Larisa Epatko