BERLIN — As Germany slowly recovers from the economic crisis, the country’s voters are still concerned about jobs and financial stability heading into Sunday’s election, which will decide whether Chancellor Angela Merkel’s conservative party stays in power.

The leading challenger to Merkel’s Christian Democrats (CDU) is the center-left Social Democratic party (SPD), led by Frank-Walter Steinmeier who is also the foreign minister.

Many voters say top election issues this year revolve around the economic crisis, including the country’s unemployment rate, which is particularly high in eastern Germany, and potential cuts in pensions, said Peter Gassen, a tax adviser from Dresden.

“It strikes everyday life,” he said.

The economic downturn took a toll on Germany’s export-driven economy but signs of recovery have started to register in recent months. Germany’s gross domestic product rose a meager 0.3 percent in the second quarter of 2009 — enough to make Germany one of the first European countries to turn a corner from recession.

Still, economists warn that it might take several more years for Germany to reach its pre-crisis level of prosperity.

An 85 billion euro (US$124 billion) stimulus package filled some spending gaps, subsidized jobs and helped keep unemployment from reaching even higher levels. The country’s current unemployment rate is about 9 percent, lower than the United States.

Merkel’s handling of the economic crisis might work in her favor in Sunday’s elections, according to some voters.

Sevim, a sales associate in Berlin who asked to only be identified by her first name, said she was voting for another party, but could understand why people would continue to support Merkel in the upcoming elections.

“I think she’s doing very well concerning the way she was managing the financial crisis. And I think people feel safe and are happy with the job she is doing,” she said. 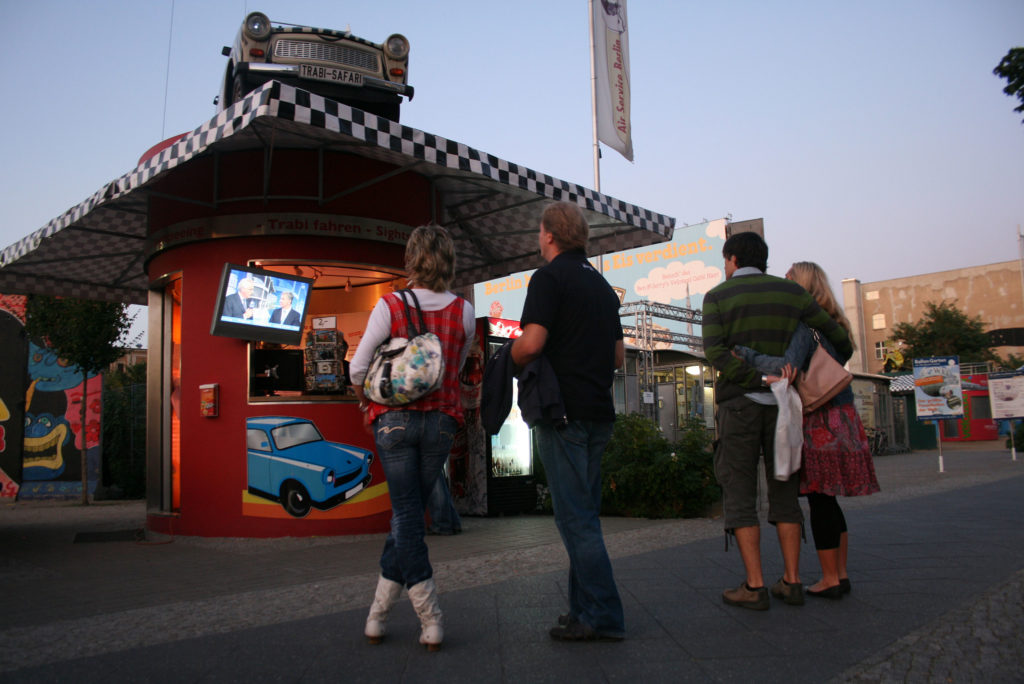 Many Germans expressed concerns over the economy in September 2009. Photo by Larisa Epatko/PBS NewsHour

Two recent polls from the Electoral Research Group and Infratest dimap show Merkel’s party and its Bavarian sister party, the Christian Social Union (CSU), with a 9-13 point lead over Steinmeier’s party, although the gap appeared to be slightly shrinking as the election neared, Reuters reported.

With no party expected to gain a majority in the election, Merkel is looking to bring the country into an even more conservative direction by joining forces with the pro-business Free Democrats, she has said.

“Above all, we need a growth oriented set of policies and I believe a new government with the FDP is the best way to achieve the policies,” she said at a press conference Friday.

Over the weekend, the Free Democrats issued a statement saying they were not interested in forming a political coalition with the other competing parties, the Social Democrats and the Greens.

“In 2005, the conservatives and the FDP were already dividing up cabinet positions before the election,” responded Steinmeier at a press conference Monday. “In the end the result was different and that will also be the case this time around.”

Merkel’s Christian Democrats and Steinmeier’s Social Democrats — traditionally rival parties — have been working together out of necessity in the “grand coalition” for the past four years. The result is a campaign that has been described by some as low-key, and even boring.

“The parties of the grand coalition find it hard to attack each other as it would be hurting themselves,” explained Jan Techau, head of the European policy studies program at the German Council on Foreign Relations.

“All elements of a thrilling campaign are lacking: contested issues, polarizing candidates, a longing for political change, a sense of urgency in light of a major crisis,” he said.

The grand coalition parties are “very nice to each other and only the little parties are saying we have to change everything,” noted Stephanie Keppler, a 39-year-old Mainz resident who supports the Green party. “In former years, we had different personalities and different themes” in the national elections.

During Merkel and Steinmeier’s only televised debate on Sept. 13, a few differences emerged, mainly on the issues of taxes and nuclear energy.

Merkel’s conservatives are seeking tax relief, though they haven’t specified how, while Steinmeier’s party says tax breaks are not possible while the government is dealing with the economic crisis.

In another policy area, Germany is looking to close its remaining 17 nuclear power plants by 2021. Steinmeier backs the closings, while Merkel wants to keep some reactors open and develop more sources of renewable energy. The Green party, which is known as the environmental party, is the most adamant about closing the plants.

And while polls show most Germans would like their 4,200 troops — stationed in Afghanistan as part of a six-year NATO mission — to return home, the issue has not taken off in the campaign since most of the major parties back the mission.

Only the “Linke”, or Left party, which does not support the deployment in Afghanistan, tried to make it an issue, but it never gained traction, said Techau.

While the coalition-building element consumes much of the public debate over Germany’s elections, some voters still plan to support the party they want with little heed to which coalition might emerge.

“Normally, I don’t think about, ‘well, do they go in a coalition and with whom do they go?’ I just vote concerning my opinion,” Keppler said.

Editor’s Note: The reporting from Germany was supported in part by the Radio Television Digital News Foundation and the RIAS Berlin Commission.