Earlier in her life, Lori Frye discovered how it felt to be someone else.

She was dressed as Zam Wesell, the female bounty hunter in “Star Wars: Episode II Attack of the Clones,” at a movie release party when some members of the international costuming organization 501st Legion spotted her and told her she should sign up. Thirteen years ago, she did.

The 49-year-old mother of two college-aged children designs medical professional liability policies for an insurance firm when she’s not designing costumes. “This is a lot more fun!” she said Thursday at the Alamo Drafthouse Cinema in Ashburn, Va., where she and dozens of other costumed enthusiasts attended an early premiere of “Star Wars: Episode VII The Force Awakens.”

Frye coordinates the 501st Legion’s public appearances, which are all voluntary and include movie premieres, parades, science fiction conventions, and charity and museum events. Out of the more than 200 events she has attended during her years as a costumer, her favorite was a Make-a-Wish Foundation visit to a boy who received a playhouse modeled after the Endor bunker in “Return of the Jedi.” “We were all jealous. It was beautiful,” she said.

To be a member of the 501st, adults must have movie-quality costumes, though the rules are a little more relaxed for children. Costumes can cost a few hundred dollars to as much as $2,000 for a full Darth Vader outfit. In addition to dressing as a Snowtrooper, Frye portrays Admiral Ackbar, who first appears in “Return of the Jedi.”

We spoke with her about what it takes to be a “Star Wars” costumer and the role of women in science fiction. 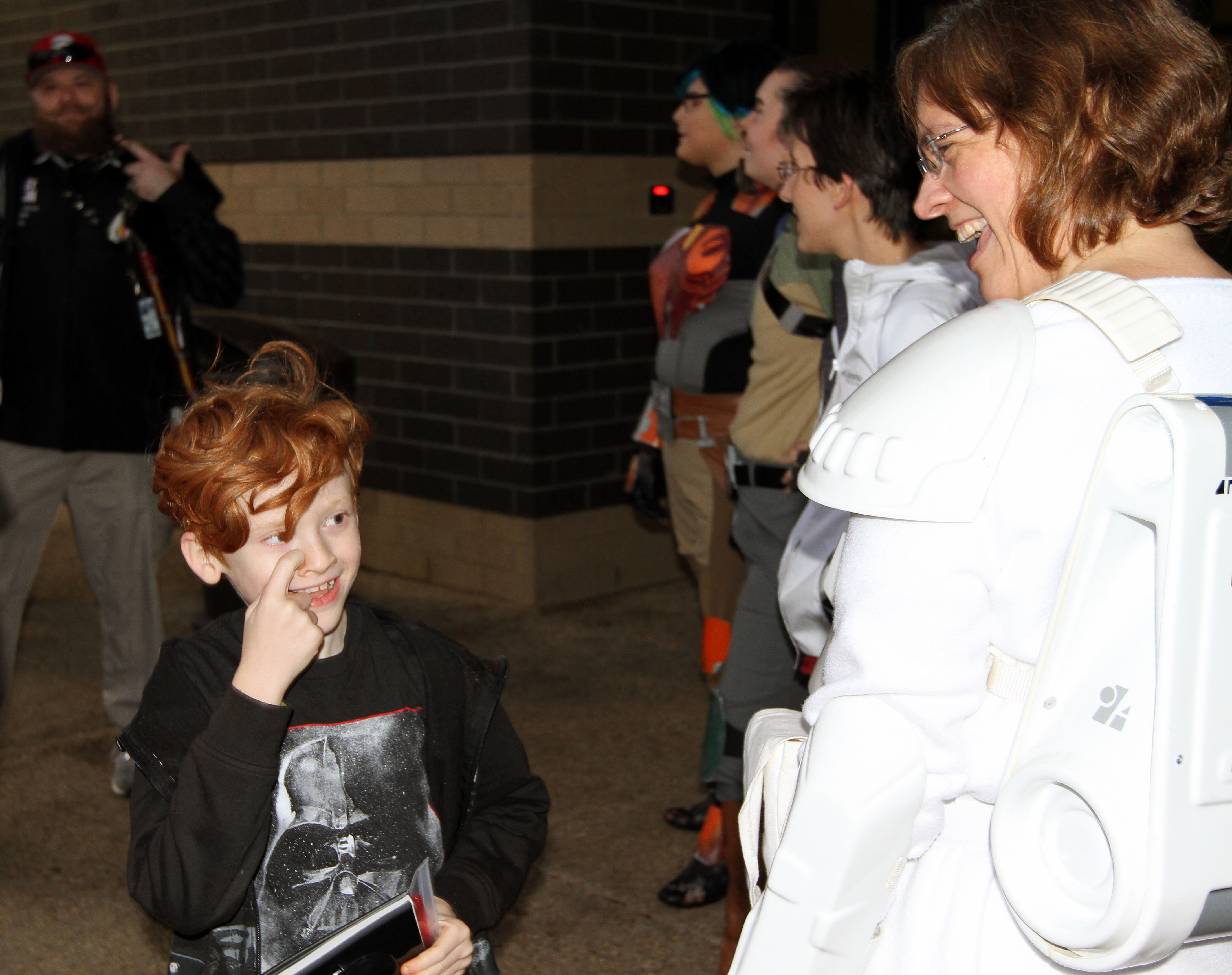 A young “Star Wars” fan interacts with costumer Lori Frye at the Dec. 17 premiere of “The Force Awakens.” The best part of costuming is the reaction from children, says Frye, but adults also revert back to their childhoods when they see a reminder of a beloved movie. Photo by Larisa Epatko

I went with my family to a theater in upstate New York, in Ithaca, for the original “Star Wars” movie in 1977. There’s a scene where Luke Skywalker is standing on Tatooine looking soulfully at the double suns and my cousin Jodi says at the top of her voice, “Oh, he’s so cute!” and the entire theater started cracking up. She was 5 years old at the time.

What was it about the movie that really spoke to you?

I think that the female in the movie, Princess Leia, wasn’t helpless. She wasn’t sitting around waiting for the men to rescue her. Even when they finally did show up to rescue her, she was bossing them around and telling them what to do. And she was right!

Usually in science fiction movies or any action movies before that, the female was basically a limp rag. So it was good to see a strong female in the lead. You don’t catch that very often and you certainly didn’t back then. 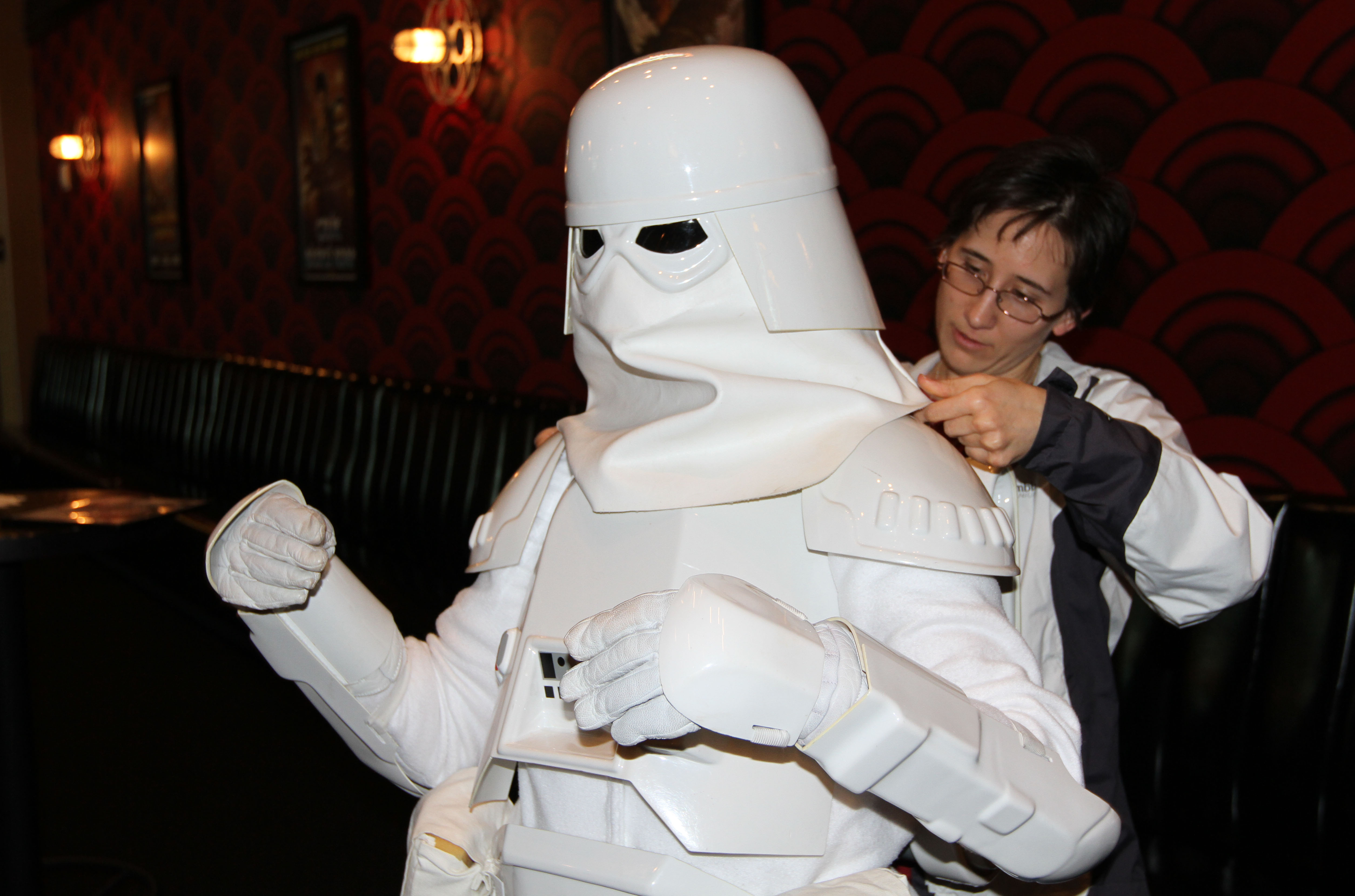 A friend helps adjust the helmet of Lori Frye’s Snowtrooper costume. The 49 year old jokes that the other members of the 501st Legion costuming club call her “Garrison Mom.” Photo by Larisa Epatko

But some critics contend that “Star Wars” doesn’t have enough female characters. (New York Magazine spliced all the non-Princess Leia speaking roles into a 1-minute video.)

People today can look back and say there’s only one female character. But the fact that there was even one who wasn’t basically an ornament was revolutionary back in 1977.

Have subsequent “Star Wars” movies improved on the numbers?

I think they did. Rey, in Episode VII, looks like she’s a strong character from what they’ve shown in the previews. We’re just thrilled to see Captain Phasma (who commands the First Order’s legions of troopers) in her gorgeous chrome armor. There’s going to be a lot of women who will be doing that costume build. And the nice thing is you sometimes see female armor sets with cleavage, and they didn’t go that route.

What’s your favorite line from the movies?

I like quoting the subtle ones. It’s always fun to throw them into casual conversation. I get a lot of use out of, “I got a bad feeling about this” (Han Solo in the trash compactor, among other times in the movies). It’s also useful to put out, “Impressive, most impressive” (Darth Vader). And of course calling people a “scruffy-looking nerf herder.” 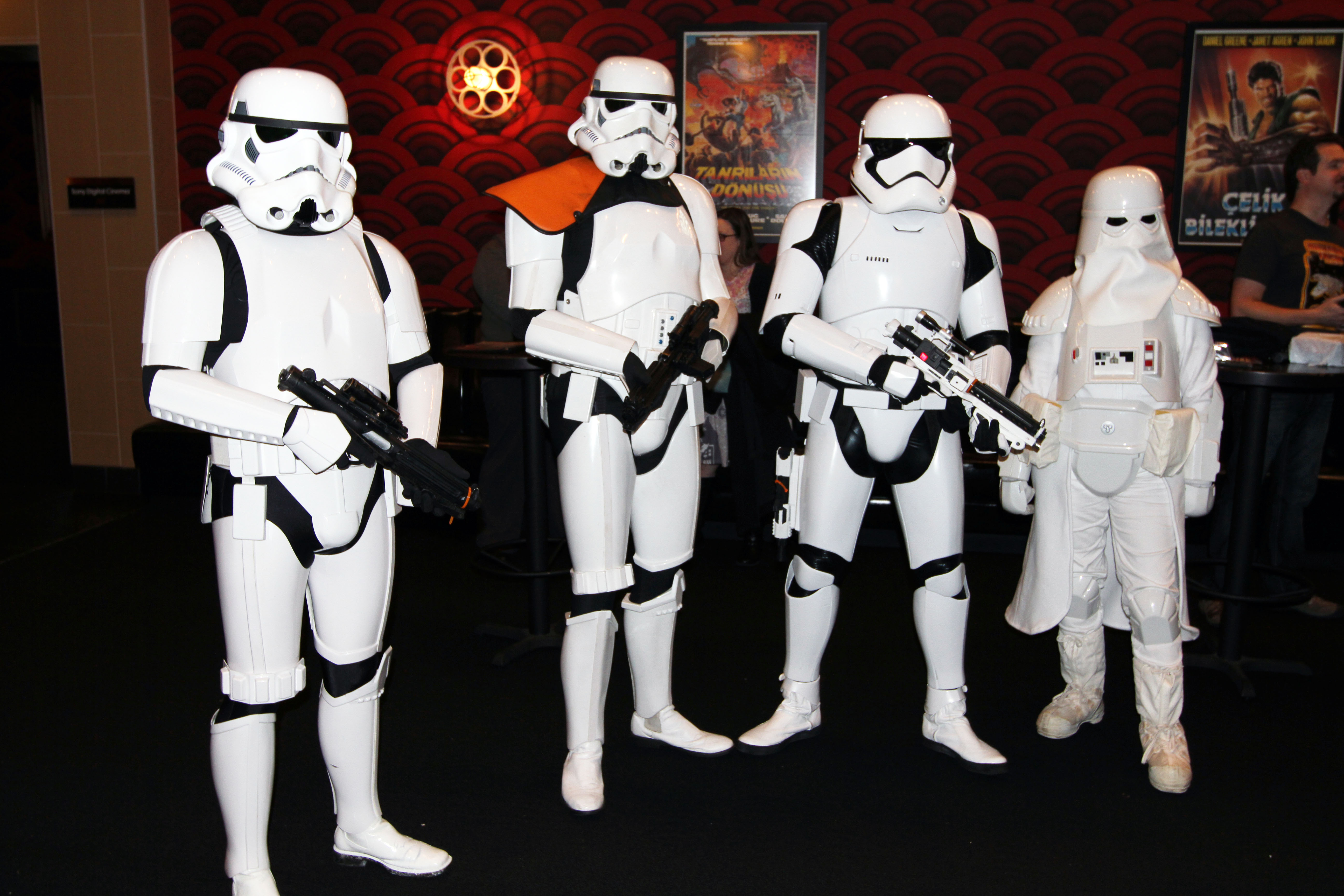 Members of the 501st Legion attend movie premieres and charity events. Lori Frye (right) says the public will often joke, “Aren’t you a little short for a Stormtrooper?” — Princess Leia’s famous line when Luke Skywalker bursts into her prison cell in disguise. Photo by Larisa Epatko

Lightning round: Who do you like better Han or Luke?

Han, no question. If you didn’t fall in love with Harrison Ford by the end of “Empire Strikes Back” then get your estrogen levels checked.

That one’s tough, I love them both.

R2-D2, although I’ve become really fond of C-3PO, because there’s a fantastic C-3PO costumer who sometimes makes it to our events in Virginia who just nails it and who’s fun to troop with.

Do you ever speak of Jar Jar Binks, the much-maligned character from the prequel?

I have a Jar Jar Binks target that we made for the Stormtrooper Olympics. We use Nerf darts.

UPDATE on Friday: After seeing the movie, Frye emailed: “The movie was fantastic — it was like hearing a language that I hadn’t heard spoken properly since 1983. J.J. Abrams hit all the right notes in the plot, and John Williams did the same with the soundtrack. It was a very good feeling leaving the theater without any of the lingering doubts that hung around after the prequel trilogy.”

Check out more photos from the premiere below. 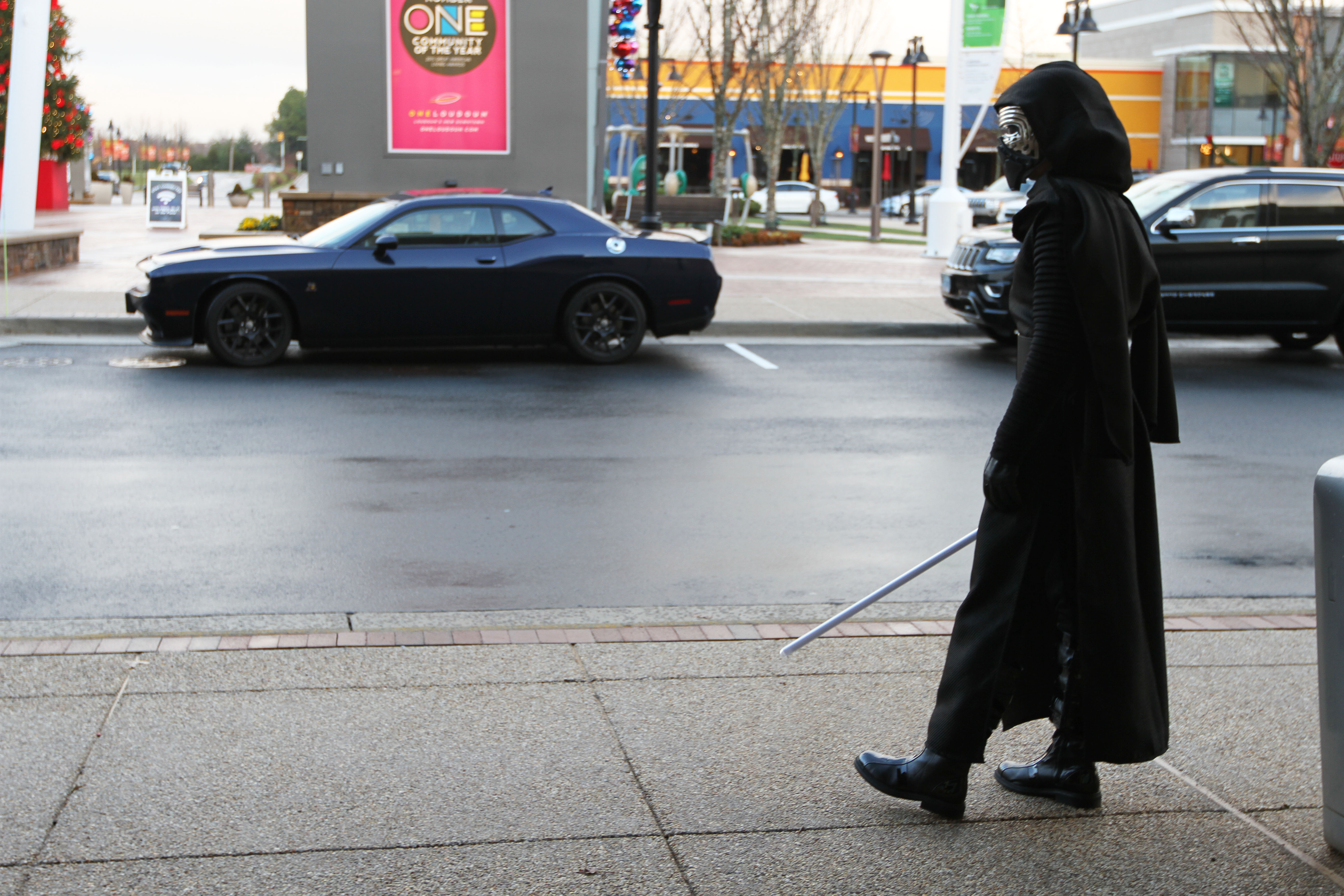 Kylo Ren, a “dark warrior strong with the force,” waits for visitors to attend the “Star Wars: Episode VII The Force Awakens” premiere at the Alamo Drafthouse Cinema in Ashburn, Va., on Dec. 17. Photo by Larisa Epatko 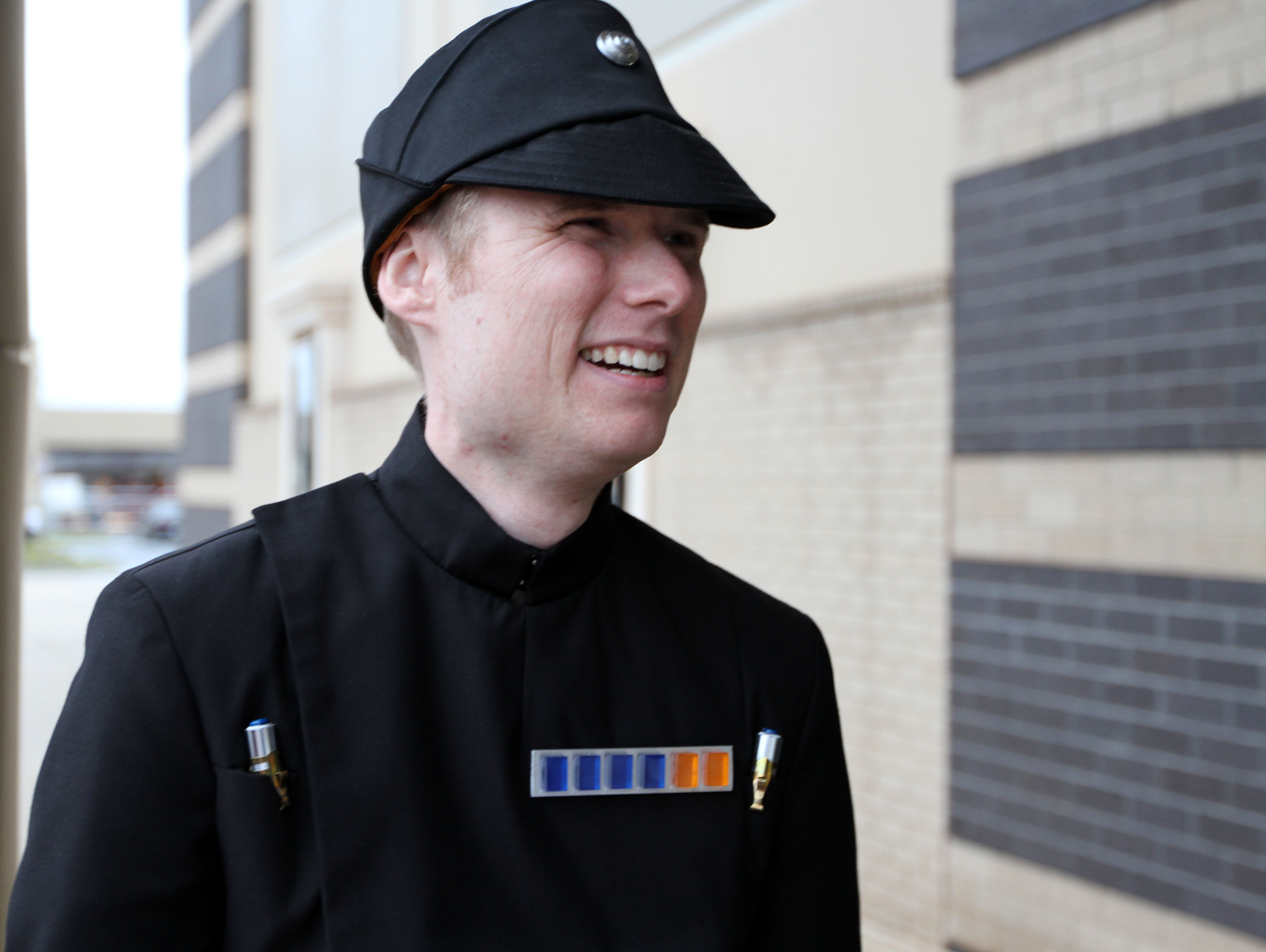 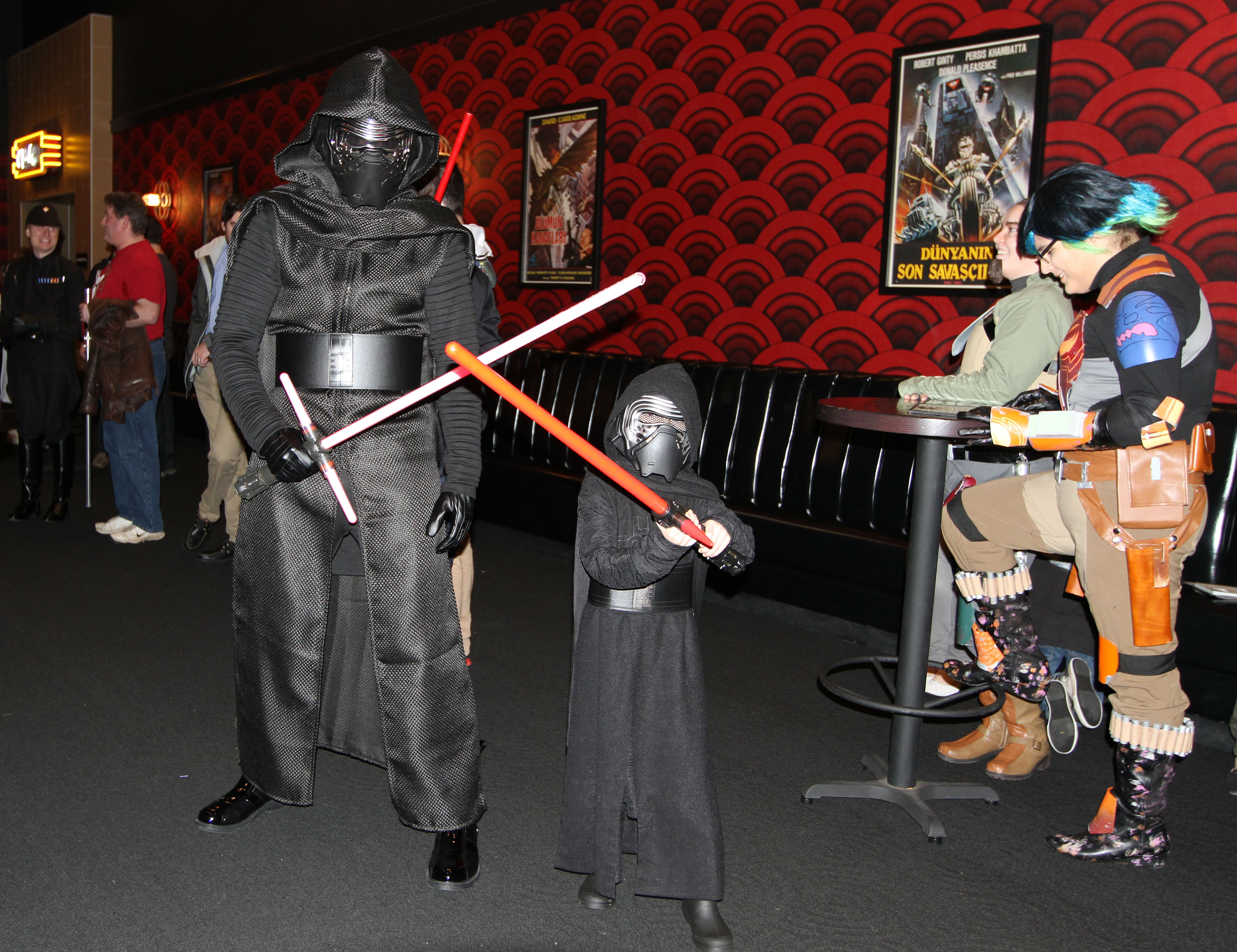 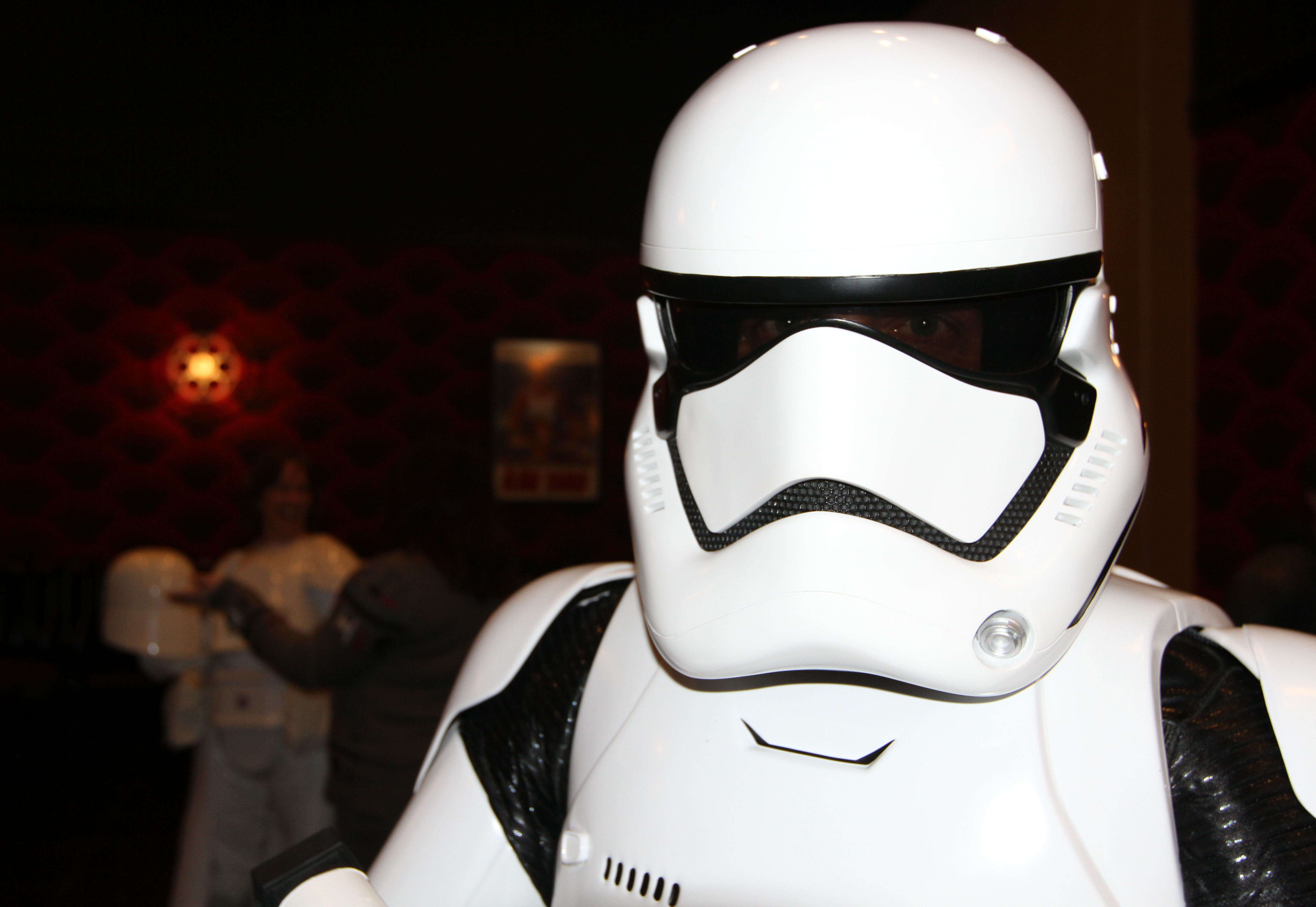 A member of the 501st Legion dresses as a more recent version of a Stormtrooper in the “Star Wars” series. Photo by Larisa Epatko 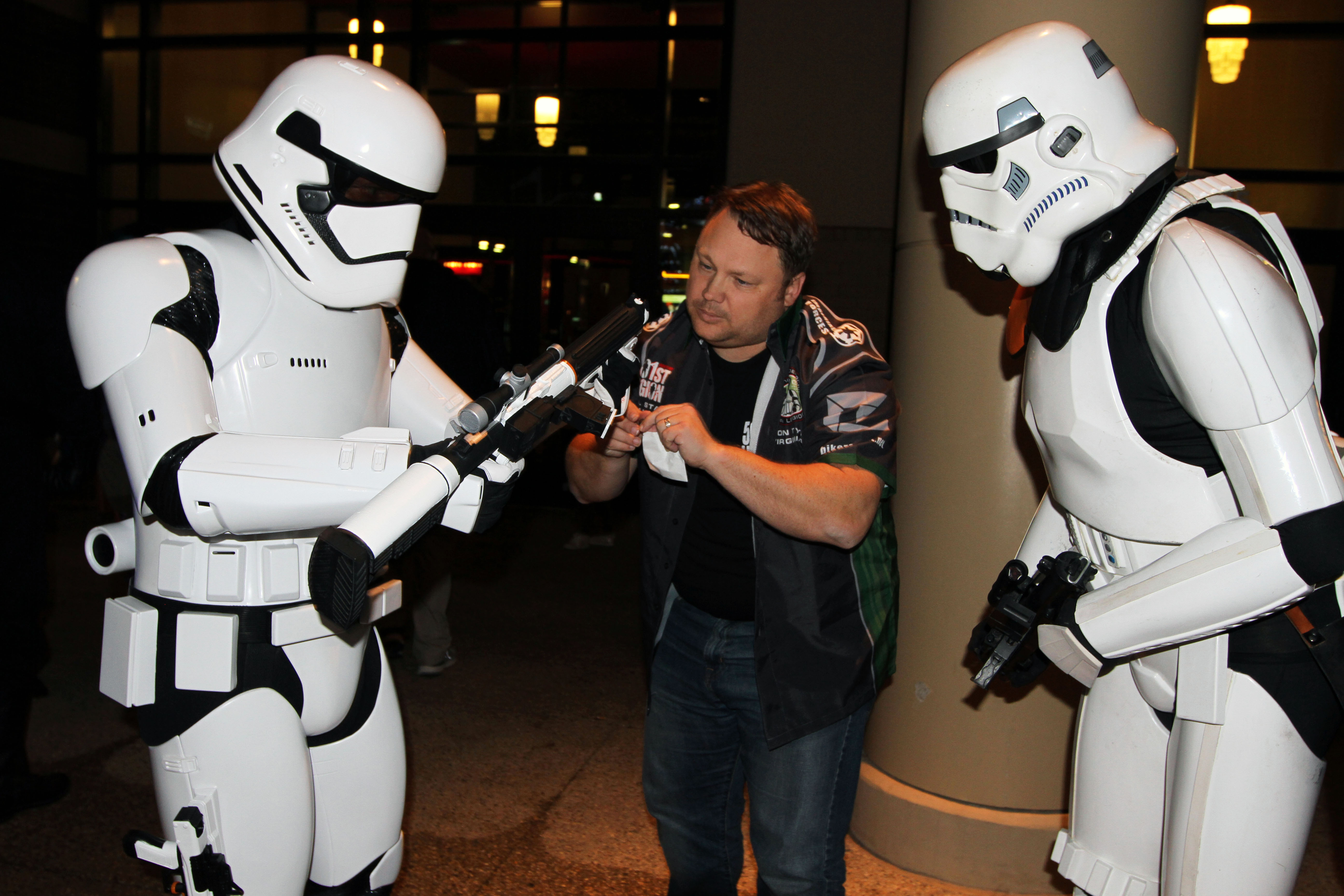 A Stormtrooper gets assistance with his blaster from a member of the 501st Legion costuming organization. Photo by Larisa Epatko 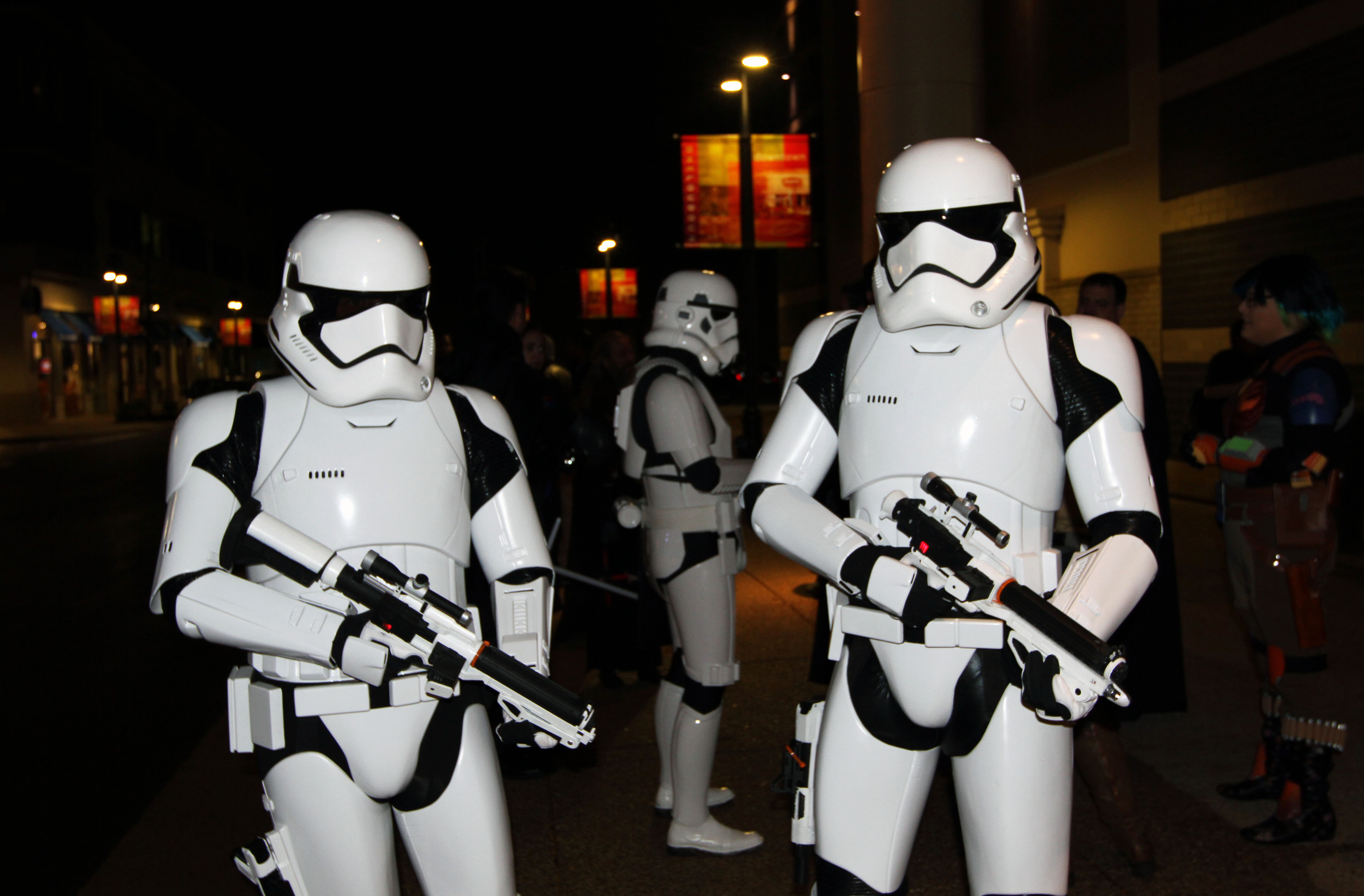 A gaggle of Stormtroopers with the 501st Legion await guests at the opening of the latest “Star Wars” movie. Photo by Larisa Epatko

Left: Under this Snowtrooper's helmet is Lori Frye, a member of the Star Wars costuming organization called the 501st Legion. Photo by Larisa Epatko