While growing up in Avondale, Ariz., Stephanie Arzate dreamed of becoming an architect. But her life changed course after she participated in an after-school program organized by New Global Citizens, which ignited in her a passion for women’s rights.

Now at age 21, she is going to Georgetown University and hoping for a career in the Foreign Service.

Arzate told us via email where she was studying in Pune, India, that she already had an interest in women’s issues before her involvement in New Global Citizens, “but being a part of NGC made it more tangible.”

New Global Citizens provides basic informational materials to high school students and lesson plans for teachers to help them tackle complex issues, such as gender equality, maternal health, armed conflict, and the environment. The PBS NewsHour’s Extra education website worked in collaboration with New Global Citizens on a series of lesson plans looking at human rights and the Olympics.

The Tempe, Ariz.-based organization not only supplies students with information about global problems, but also ways they can get involved, such as fundraising for groups trying to address the problems. The students have held bake sales and talent shows to help raise funds for such groups as A Ban Against Neglect, which helps mothers in Ghana, and Sustainable Resources Ltd., whose projects include well repair in Malawi. 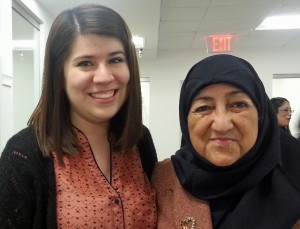 Student Stephanie Arzate and Sakena Yacoobi, director of the Afghan Institute of Learning

Arzate and her friends helped raise funds for the Afghan Institute of Learning, an organization dedicated to providing education for women and children in Afghanistan. Arzate got a chance to meet its executive director, Sakena Yacoobi, at an award ceremony at Georgetown a year later. “I didn’t need to tell her more than my name and where I went to high school. She immediately hugged me and thanked me and my high school team for the money we raised.”

Lisa Glenn, director of programs at New Global Citizens, said the group’s mission is to empower students to become advocates, community educators, and change leaders. Students can contact NGC and get an information kit about 10 global issues. They then can plan their own after-school activities and community events to help raise awareness about the world’s challenges.

The after-school program started in 2007 and a classroom program began in 2012 to answer demand from teachers who were looking to adapt the materials to the classroom, said Glenn. The group works with schools in Arizona, California, North Carolina and Hawaii.

New Global Citizens’ organizers try to emphasize that there are plenty of ways to view and approach a problem. Students are encouraged to let others express different viewpoints and to use research to back up their own beliefs, said Glenn.

Some of the issues can be sensitive and political, she continued, but “we try to stay with the facts and stay out of the political fray. With that said, they might have to engage in issues that might be difficult to talk about in society. In the after-school program and within the classroom, we provide guidance around talking to peers in a way that’s respectful and academic, to keep conversations around issues rather than people.”

She said some parents have expressed concerns about some of the more controversial topics, but the group’s message is: “Your students are going to be confronted with these issues. Wouldn’t you like to be the ones who talk to them about it first?” Each topic includes a summary of materials so parents and teachers are not caught off-guard, she added.

“The great thing about this is parents, teachers, students, me — all of us are learning new things,” said Glenn. “And there’s always going to be more to learn. That’s part of our professional development for teachers and our work with the student team leaders. They’re never going to know all the answers.”

For Arzate, who became a mentor and liaison between local NGC chapters and the main office, it was an exercise that led to a calling. “My goal is to one day work at an organization that deals with women’s rights issues, especially women’s leadership, in the developing world.”

The PBS NewsHour’s Social Entrepreneurship page currently is focusing on individuals and organizations that help children. Give us your suggestions for more people to profile in the comments section below or tweet us.

Left: Students march in the Martin Luther King Jr. parade in Mesa, Ariz., to support A Ban Against Neglect, which helps mothers in Ghana. Photo courtesy of New Global Citizens