Just as in 1999, Oklahoma Town Rebuilds After Twister

NewsHour correspondent Betty Ann Bowser visited residents just returning to their homes after tornadoes swept through Oklahoma and Kansas in 1999.

In 1999, Genny and Bob McLane, both in their 80s, had just redecorated their three-bedroom home in Del City, Okla., when the tornado hit.

It was a massive storm system that plowed through Oklahoma, Kansas, Arkansas, Texas and Tennessee from May 3 through 6 of that year. Sixty-six tornadoes struck Oklahoma and Kansas alone.

The one that swept through the Oklahoma City suburbs of Del City and Moore, which suffered another tornado on Monday, packed winds of 318 mph, making it the strongest tornado ever recorded. By comparison, Monday’s tornado had 200 mph winds. 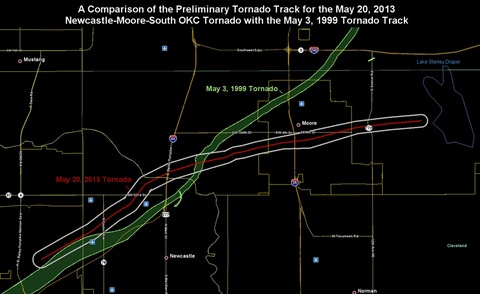 Paths of the tornados in 1999 and 2013. Map by the National Weather Service, Norman, Okla., office. Click on image for a larger version.

The McLanes escaped the storm in a nearby shelter and then were taken in by neighbors. They returned to their home several days later to see what was left, and NewsHour correspondent Betty Ann Bowser accompanied them at the time.

Genny McLane said she was hoping her 50th wedding anniversary portrait would survive, and there it was, amazingly hanging on what was left of their living room wall.

“Isn’t that funny? It had mud on it the other day,” she said.

The city of Moore will spend the next days, weeks and months ahead, also surveying what’s left and rebuilding from there.