5 overlooked stories that deserve your attention

Last week, President Donald Trump visited Texas (twice) to survey the damage from Hurricane Harvey, a storm that has killed at least 70 and left thousands without a home.

On his first trip, to Corpus Christi and Austin, the president was criticized for being out of touch, meeting with officials rather than residents and focusing on the response instead of the devastation.

On Saturday, he walked Houston’s ravaged streets, side stepping debris, and toured a mega-shelter, where he scrawled his name on a wall alongside artwork hung by children.

Across the globe, North Korea launched its strongest nuclear test to date, and Trump and world leaders are still debating (and disagreeing on) how to respond to the regime’s escalating threats).

In the rush of coverage on how the president is navigating these crises, here are five important stories you may have missed. 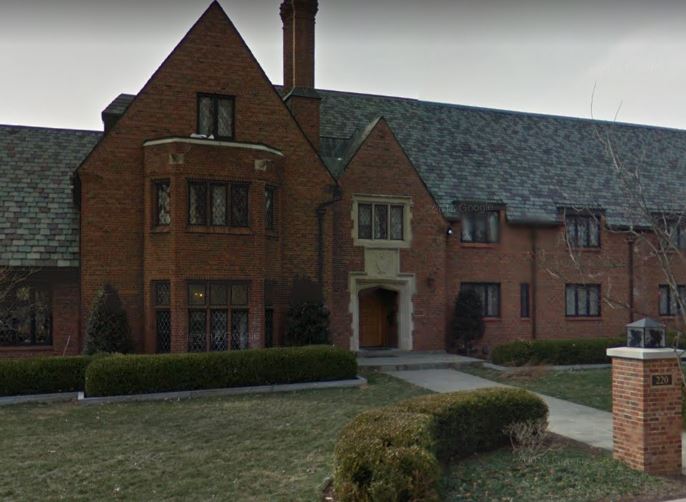 Beta Theta Pi’s house at Penn State University. The fraternity was shut down after the death of a young recruit earlier this year. Screen grab from Google Maps.

A Pennsylvania judge has dismissed the most serious charges against 18 Penn State fraternity members in the hazing death of a new pledge last February.

Magisterial District Judge Allen Sinclair dropped charges of involuntary manslaughter and aggravated assault for eight of the fraternity members indicted in the death of Timothy Piazza, a sophomore from Lebanon, New Jersey, Penn Live reported. The judge also dropped four defendants from the case. (Two other fraternity members who waived their right to a hearing still face their own charges).

Piazza was 19 when he participated in an initiation event for Beta Theta Pi at the group’s fraternity house — a “drinking gantlet in which fraternity pledges drank several kinds of alcohol,” The New York Times reported. Video played in court earlier this year shows fraternity brothers arguing about what to do as Piazza vomited and slipped in and out of consciousness (and at some point, also fell down a flight of stairs). It took the fraternity brothers nearly 12 hours to call an ambulance, prosecutors say; Piazza died the next day.

Fraternities are among the campus activities that can dramatically enhance a student’s educational experience. “Unfortunately, the bonding process sometimes exacts a price,” writes Hank Nuwer, who has spent the past four decades researching hazing on college campuses. Hazing has killed at least one pledge (but many times more) “every year since 1969,” he said in a piece for The Conversation last week.

Advocates and legal experts were looking to the Penn State trial, which has been called the largest ever criminal indictment in a hazing case, as a landmark case for hazing in Greek organizations. The judge’s decision last week severely scales back the scope of the case, and also undermines the state’s heavy-handed pursuit of charges against the fraternity brothers, advocates say.

“Will new restrictions on campuses be enough to protect all of our students? … Or will 2019-2020 become the 50th year in a row that we must mourn?”

Penn State President Eric Barron banned Beta Theta Pi from campus after Piazza’s death in February. He also issued a new list of requirements for fraternities and sororities, including a cap on the size and scope of social gatherings, a shorter pledge process and a limit on what kinds of alcohol can be served.

Critics, including Piazza’s parents, have asked: Is that really enough?

Barron doesn’t think so. In an op-ed in USA Today, he said he’s working with Rep. Patrick Meehan, R-Pa., on legislation that would toughen penalties for hazing and also require universities to report hazing under the Clery Act. He’ll also call for a gathering of university leaders nationwide to address the issue.

“Will new restrictions on campuses be enough to protect all of our students?” Nuwer wrote as students returned to campus. “Or will 2019-2020 become the 50th year in a row that we must mourn?”

2. Young black people are far more likely than young white people to be in custody in England and Wales

The report, part of a sprawling independent review of how black, Asian and other ethnic minority teens are treated in the criminal justice system in those countries, showed only 1 in every 10,000 young people from white ethnic backgrounds were in custody in that time period. The rate of black custody was also higher than Asian (2) and mixed ethnic (4) groups. 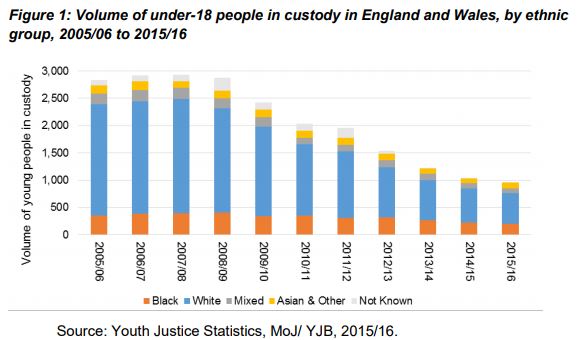 White youth who were held in custody in the youth court system were more likely than black youth to recommit a crime. Graphic from the Ministry of Justice.

Meanwhile, young white people who left custody were significantly more likely to commit a crime again than their black peers, according to the report. And young black people between the ages of 10 and 17 have spent more time in custody than young white people.

The report focused on people between the ages of 10 and 17 who were in the youth justice system, which has separate guidelines than the system for adults. While that often means softer sentences, the youth court’s power to hold someone in custody is much greater: a maximum of 24 months, compared to the six to 12 months a court usually orders custody for adults.

An interim report released last November showed not only discrepancies in time in custody, The Guardian reports, but also in other parts of the criminal process. 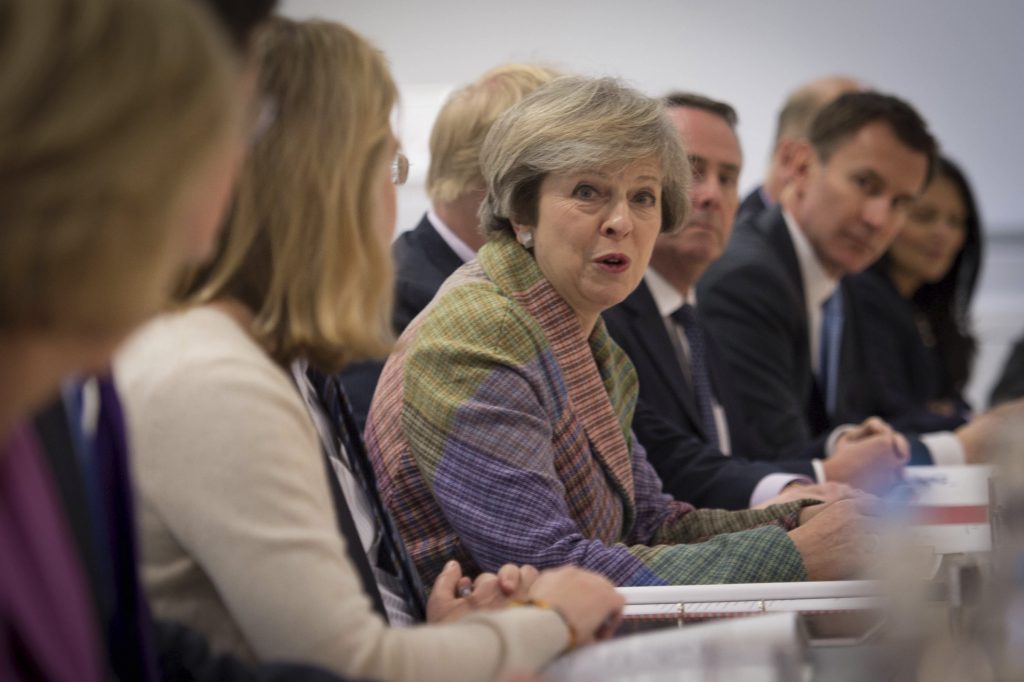 The full report, expected to be released this week, could be the first measure of how Prime Minister Theresa May handles her campaign promises to focus on social reform and inequality, the Guardian points out, while also trying to navigate Brexit.

“We need a government that will deliver serious social reform – and make ours a country that truly works for everyone. Because right now, if you’re born poor, you will die on average nine years earlier than others. If you’re black, you’re treated more harshly by the criminal justice system than if you’re white,” she said as part of her victory speech.

May has specifically pointed to the report, which means the full analysis and its recommendations — including possibly allowing ex-offenders to hide their criminal records when applying for jobs — could influence her policy.

3. A principal told her students she’d give them $100 if they stayed off their phones every Tuesday this summer. What happened?

Watch the students talk lessons learned in this video from WAMU.

In June, we wrote about Diana Smith, principal of Washington Latin Public Charter School, who told her middle school students she’d give them $100 out of her own pocket if they could stay off their cell phones every Tuesday over the summer break.

The principal told the Washington Post that the constant use of electronics had disrupted students’ sleep and incited drama at the school.

It turns out going device-free wasn’t as easy as it seemed.

WAMU reports that of the 170 students eligible for the “No Tech Tuesday” challenge, 70 students signed on, but only about half of them — 36 — made it through the summer.

Some students — Liza Cattaneo — had to get creative. “I would have to use the landline which is, like, ancient. I would close my eyes and ask my mom to look on my phone and give me the number of one of my friends and I would use this landline [to call them]. I never got anyone because they didn’t know the number so they thought it was a telemarketer,” she told WAMU.

The bad news: students dropped from the challenge over the summer like flies, some after only a week. The good news: Smith saved money … and even those students who didn’t last all 11 weeks of the challenge learned some valuable lessons.

“I think I’m a lot more aware of when I pick up my phone now and aware when I’m on my phone. Now I have a running list of ideas for what to do so I think, overall, I’m on my phone and screens less,” Lydia Moore, a ninth grader, told the radio station.

4. South Asia floods have killed more than 1,400 as communities brace for more 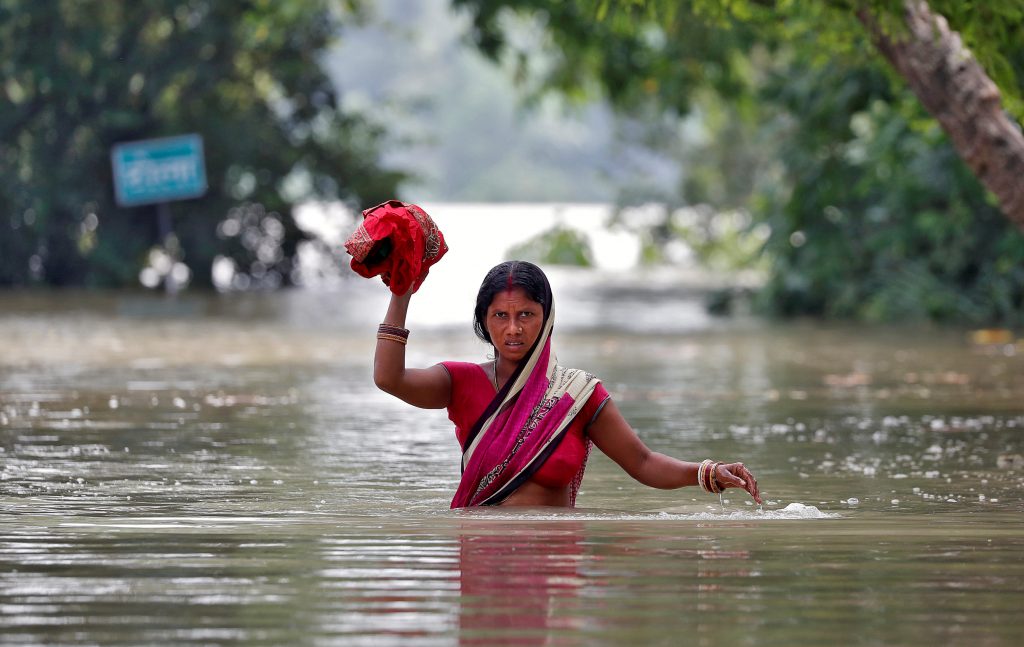 The worst monsoon-related flooding in years has killed more than 1,200 in South Asia, news outlets report. Photo by Cathal McNaughton/Reuters.

Monsoon rains and heavy flooding in South Asia have killed upwards of 1,400 people in the past month, affecting 40 million people across the region as communities brace for at least another month of storms.

Oxfam’s latest count put the death toll at 1,453, including 1,170 in India, 143 in Nepal and 140 in Bangladesh. The floods have destroyed homes, schools and health centers.

Raman Kumar, Oxfam partnership and capacity development adviser for Asia, told NewsHour that these countries are facing changing and increasingly unpredictable precipitation patterns — “another impact of changing climate,” he said. “More precipitation in less time, as well as in changing geographies in some cases, is surpassing the preparations and coping capacity of the communities.”

Oxfam reported that two-thirds of Bangladesh was underwater, and some areas have seen the worst flooding since 1988. In India, monsoon rains caused some buildings to collapse and have breached dams, threatening villages with flooding. Train service was interrupted and flights cancelled in Mumbai. 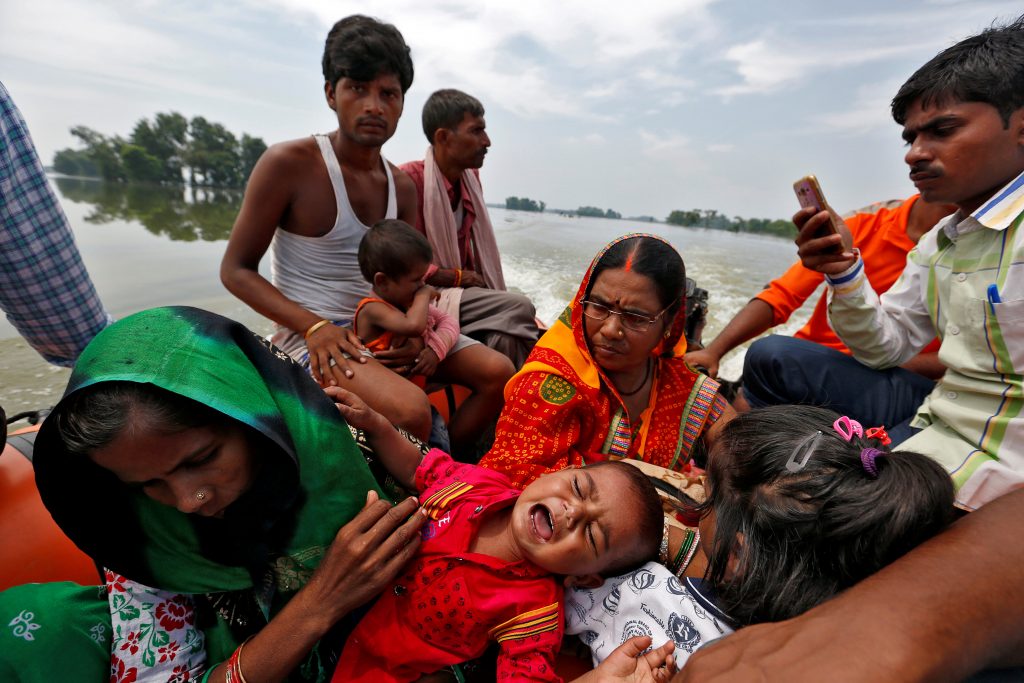 A family is rescued from a flooded village in the eastern state of Bihar, India on Aug. 23. Photo by Cathal McNaughton/Reuters

“While some flooding is normal during the monsoon season, for most of the communities hit, this level of flooding is unusual and unheard of,” Oxfam said in a statement.

Some districts are seeing levels of rainfall they haven’t seen in 60 years, said Valerie Julliand, the resident coordinator of the United Nations in Nepal. And heavy rains are expected through at least October, the United Nations said Friday

Those who have survived are in need of health services and food. Longer term, “people’s greatest need — beyond the humanitarian ones — is to have the certainty that whatever livelihoods and life they rebuild are not going to be lost again in tomorrow or next year’s floods,” Julliand said. They’ve been displaced from their homes, and in many cases have completely lost their crops and livestock.

They want sturdier embankments to hold back rivers, and access to jobs and income-generating activities, she said. “If employed, people’s resilience multiply a hundredfold.”

On Sept. 1, a giant space rock named after Florence Nightingale nearly sideswiped Earth. That is, if sideswiping could be applied to an object 4.4 million miles away — that’s 18 times the distance between the Earth and the moon. Judging by the news stories, you’d think it was a near miss. CNN called the flyby a “close call,” Popular Mechanics and New Scientist said the asteroid “buzzed” the Earth. But by cosmic standards, Florence wasn’t far at all: It flew eight times closer to Earth than it’s ever been since its 1981 discovery.

The giant asteroid, results show, is about 2.8 miles long and orbited by a pair of small moons. Few asteroids as big as Florence exist in our celestial neighborhood. And triple asteroids are rare. Of more than 16,000 asteroids discovered to date, this marks only the third.

Sky and Telescope has these additional details: “The radar images reveal a ridge along its equator, at least one large crater, two large flat regions, and numerous other small-scale topographic features. If further analysis shows that the moons orbit near Florence’s equatorial plane, then that ridge might be a pile of accumulated debris that fell back onto surface after the impact event that caused the moons to form.”

Left: The United Nations estimates that 41 million people are affected by the flooding and landslides in South Asia. Photo by Anuwar Hazarika/Reuters