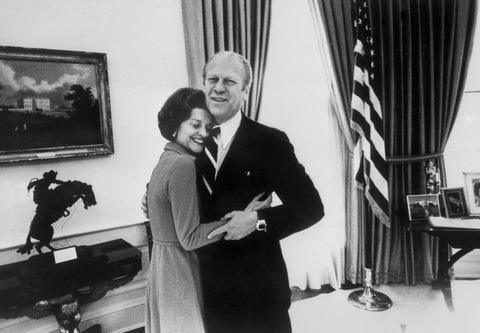 Betty and Gerald Ford at the White House in 1974. Photo by STR/AFP/Getty Images

Betty Ford — wife of President Gerald Ford, advocate for breast cancer awareness and activist for women’s issues — died Friday with her children around her at age 93.

The exact cause of her death was not immediately known.

“Throughout her long and active life, Elizabeth Anne Ford distinguished herself through her courage and compassion. As our nation’s first lady, she was a powerful advocate for women’s health and women’s rights. After leaving the White House, Mrs. Ford helped reduce the social stigma surrounding addiction and inspired thousands to seek much-needed treatment. While her death is a cause for sadness, we know that organizations such as the Betty Ford Center will honor her legacy by giving countless Americans a new lease on life.

“Today, we take comfort in the knowledge that Betty and her husband, former President Gerald Ford, are together once more. Michelle and I send our thoughts and prayers to their children, Michael, John, Steven, and Susan.”

Born Elizabeth Ann “Betty” Bloomer in Chicago on April 8, 1918, she grew into an athlete, enjoying activities from hockey to dance. After high school, she attended the Bennington College School of Dance in Vermont, and later moved to New York to pursue her studies under choreographer Martha Graham.

She later returned to Grand Rapids, Mich., where she grew up.

Her first husband was William Warren, a traveling salesman and childhood friend. They divorced after five years of marriage.

Friends introduced her to Gerald Ford, and they married on Oct. 15, 1948, during his campaign for the U.S. House.

He later became vice president and then president when Richard Nixon resigned on Aug. 9, 1974.

Later that year, Betty Ford was diagnosed with breast cancer, which she spoke freely about, shattering the taboo of discussing the disease.

She also overcame alcoholism and an addiction to pills, and helped found a rehabilitation center to help others with addiction.

Her husband Gerald Ford died in 2006. She is survived by their children Michael, John, Steven and Susan.

“Laura and I are deeply saddened by the passing of Betty Ford. We admired her as a first lady and valued her as a friend. She made countless contributions to our country, and we especially appreciate her courage in calling attention to breast cancer and substance abuse. Because of her leadership, many lives were saved. Tonight our prayers go out to Mrs. Ford’s entire family.”

“I was deeply saddened this afternoon when I heard of Betty Ford’s death. She has been an inspiration to so many through her efforts to educate women about breast cancer and her wonderful work at the Betty Ford Center. She was Jerry Ford’s strength through some very difficult days in our country’s history, and I admired her courage in facing and sharing her personal struggles with all of us.

“My love and deepest sympathy go out to the entire Ford family at this very sad time.”

View the PBS documentary “Betty Ford: The Real Deal”, along with a slide show of her life in the White House, interviews with her children and photos from her younger years.

We’ll have more about Betty Ford’s life and legacy on the NewsHour.