Conservative activist Phyllis Schlafly died Monday at age 92 in her St. Louis, Missouri, home with her family by her side.

Her strong pro-family stances motivated her public life, according to the Eagle Forum, a group she founded:

“Phyllis Schlafly spent an astounding 70 years in public service of her fellow Americans. Her focus from her earliest days until her final ones was protecting the family, which she understood as the building block of life. She recognized America as the greatest political embodiment of those values. From military superiority and defense to immigration and trade; from unborn life to the nuclear family and parenthood, Phyllis Schlafly was a courageous and articulate voice for common sense and traditional values. She authored 27 books and thousands of articles. She spoke tens of thousands of times across the United States.” 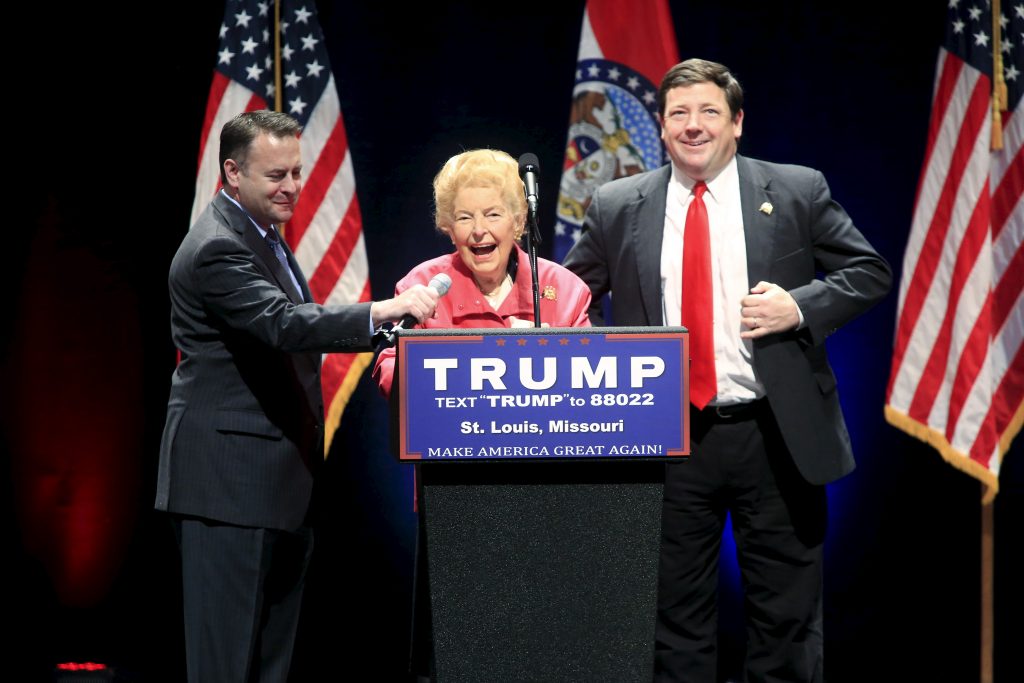 Those speaking engagements continued even recently, when she endorsed Republican presidential candidate Donald Trump at a campaign event in March. Trump praised her on Twitter:

The truly great Phyllis Schlafly, who honored me with her strong endorsement for president, has passed away at 92. She was very special!

Schlafly rose to prominence in the early 1960s after publishing a sort of manifesto for the right called “A Choice Not an Echo”, which boosted conservative icon Arizona Sen. Barry Goldwater to the top of the 1964 Republican ticket. Goldwater ultimately lost the election to incumbent President Lyndon B. Johnson.

People either loved or hated her. She garnered enemies when she led the movement in the 1970s against the Equal Rights Amendment, saying it would disadvantage housewives and lead to including women in the military draft.

But conservative commentator Ann Coulter wrote that Schlafly’s arguments, discounted at the time, later rang true: “Not surprisingly given her background, one of Schlafly’s most devastating arguments against the E.R.A. was that it would end the female exemption from the draft. Though the amendment’s proponents sneered that this was preposterous, she was right. Law professors would soon be making the exact same point in the likes of the Yale Law Journal.”

In one of her final columns about transgender guidelines for schools, published on Aug. 31, Schlafly urged readers to “Check your local school to see if it is confused about whether boys should be allowed in girls’ restrooms and showers.”

She was considered an anti-feminist and she enjoyed ribbing the feminist movement. At a pro-family gathering in 1977, she told the crowd: “I’d like to thank my husband, Fred, for letting me be here today. I like to say that because it irritates the women’s libbers more than anything.”

Her hometown newspaper, the St. Louis Post-Dispatch, said simply labeling Schlafly an anti-feminist belied her influence. Although she never succeeded in getting elected to public office herself, she used her books, radio commentaries and public appearances as her podium.

“Before Sarah Palin and Michele Bachmann, there was Phyllis Schlafly,” the newspaper wrote.

Schlafly’s husband died in 1993. She is survived by six children, 16 grandchildren and three great-grandchildren.