Manning, Snowden and the DOJ’s Espionage War Against Leakers 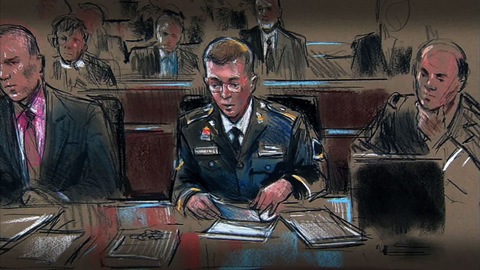 Edward Snowden, the former intelligence contractor who leaked top-secret documents about the National Security Agency’s surveillance programs, is the eighth person charged by the Obama administration under the 1917 espionage law. Unlike other alleged leakers, Snowden revealed his identity right away and has maintained a highly public profile ever since.

“He has been the most outspokenly direct in his assertions that not only did he do it, but it was the right thing to do,” said Steven Aftergood, director of the Project on Government Secrecy at the Federation of American Scientists.

Snowden is currently in a sort of diplomatic limbo, holed up inside the transit area of a Moscow airport, as he attempts to negotiate safe passage to a country that will offer him asylum. On Friday morning, the New York Times reported Snowden “met with representatives of international human rights organizations and appealed for their help in seeking asylum status in Russia until he can safely travel to Latin America.”

View a list of the 11 alleged leakers charged under the Espionage Act: 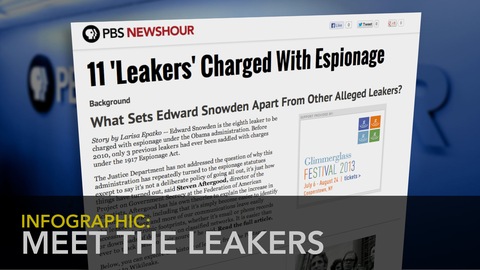 Bradley Manning, another person charged under the espionage law, eventually admitted to turning over classified documents related to the Iraq and Afghanistan wars to WikiLeaks, though he said he only meant to provoke public debate. He evaded identification at first and might never have been turned in if it weren’t for a government informant: computer hacker Adrian Lamo.

Snowden, on the other hand, readily acknowledged committing the disclosures before even being accused. Making the prosecution’s job all the easier are Snowden’s charges of disclosing “classified communications intelligence information”, in addition to revealing “national defense information”, said Aftergood. “There’s essentially no doubt that the records disclosed by Snowden fit into that (former) category.”

What kind of punishment could Snowden face?

For each count under the espionage law, the defendant faces up to 10 years in jail plus monetary fines, said Aftergood, but Snowden has not been indicted yet, so the number of counts isn’t final.

Shamai Liebowitz, who was convicted of a communications disclosure violation, was sentenced to 20 months in prison, but that was partly because of his agreement to plead guilty, Aftergood added.

Why have more people been charged under the espionage law under the Obama administration than previous ones?

Snowden is the eighth person to be charged under the espionage statute under the Obama administration, more than double the other presidents combined.

The Justice Department has not explicitly addressed the question except to say it’s not a deliberate policy of going all out, it’s just how things have turned out, said Aftergood, who offered some of his own theories:

It’s simply become easier to identify the leaker. “More and more of our communications leave easily accessible electronic footprints, whether it’s email or phone records or downloads of documents on classified networks. It is easier than ever to track them to their source,” he said.

The sting of the WikiLeaks revelations also might have come into play. “The scale of the WikiLeaks disclosures was so unprecedented and came as such a shock to officials that they were determined to do whatever they could to prevent a recurrence. Part of that included a zero tolerance posture toward leaks,” said Aftergood.

“Obviously, they were not entirely successful and whatever they did in the last couple of years was not sufficient to dissuade Snowden from doing what he did. Nevertheless, I think that is probably part of the explanation for the hard line on leaks.”

Congress also has insisted in a bipartisan manner that leaks be prosecuted and combated to the utmost, he added. “No one has been saying, stand down, back off, take it a little easy.”