Flight 93 Memorial to ‘Standing Up’ Set to Open in Pennsylvania

Ten years after the passengers and crew of United Flight 93 fought back against their hijackers, driving the airplane into the ground instead of the intended target in the nation’s capital, a permanent memorial will open in Shanksville, Pa.

The new memorial, which will bring visitors closer than ever before to the site where the airplane crashed into a field in western Pennsylvania, not only commemorates those who gave their lives that day, but it “provides a beacon for the future of world citizen conduct, of doing the right thing and standing up,” said Hamilton Peterson of Bethesda, Md., who is on the board of the Families of Flight 93. He lost his father and stepmother on the flight.

The newly opened first phase of the memorial includes a viewing plaza, where visitors can approach the area where the airplane hit the ground. Only family members will be able to enter the actual site, which will continue to be fenced off to the general public. The plaza bears walls of marble engraved with the names of the 40 passengers and crew who died on the flight.

The next phase of the memorial will include a visitor center and Tower of Voices — a 93-foot chamber containing 40 cylindrical wind chimes.

“Since our last contact with the passengers and crew was through their voices and on phone calls, and the Tower of Voices kind of recreates that, and ensures that their voices are not silenced by the hijacking and the terrorist attacks but that they can still speak in a symbolic way to the people who visit the Flight 93 memorial,” said King Laughlin, vice president of the Flight 93 National Memorial Campaign.

Someday, the memorial will also contain audio testimonials by the relatives of those who died and the first responders to the crash scene. (Listen to some of them here.) But there are no plans for now to include the cockpit voice recording, though a transcript of it is available at the temporary memorial.

“We are always at danger unless we stand up for what we believe.” — Dawna Bates, American Red Cross volunteer

“It’s an extremely graphic, violent audio recording, but it also demonstrates the fact that that was the first salvo in the war against terrorism,” said Peterson, who supports the audio’s release.

The recording was played publicly only once — during the 2006 sentencing phase of the trial of convicted al-Qaida conspirator Zacarias Moussaoui.

The relatives of Flight 93 victims could listen to the tape by wearing headsets. Peterson said some family members left during the first gut-wrenching moments.

“I remember feeling bad that they could not have partaken in that bittersweet moment where you knew that the tables had been turned,” he said, adding that he thought the tape would provide an educational tool and inspirational message of how people can do the right thing. 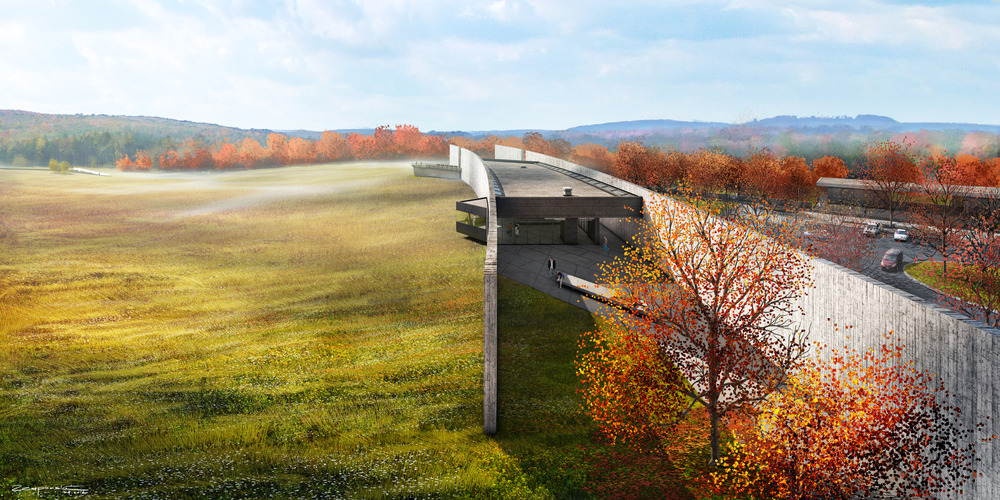 Artist’s rendering of the Flight 93 National Memorial in Shanksville, Pa.

The finished memorial will include 40 groves of trees planted over a 2,200-acre area, along with an exhibit of artifacts from the downed airplane and items left by visitors at the temporary memorial, located about a half mile from the crash site.

“It will be a great opportunity to tell people not just about Flight 93 but the context of Sept. 11,” said Laughlin. Although it’s taken longer to build than the memorials in New York City and the Pentagon, the Shanksville memorial is integral to telling the complete story about what happened on Sept. 11, he said.

So far, the Flight 93 National Memorial Campaign has raised $52 million in federal, state and private funds. Another $10 million is needed for the memorial’s completion.

Left: Listen to relatives describe what happened to their loved ones and remembrances from rescue workers who responded that day.