For the first time, read Bowe Bergdahl’s explanation for why he walked off base

Bowe Bergdahl, the Army sergeant who left his base in Afghanistan and was captured by the Taliban, now faces a court-martial. In a newly released transcript, he talks about what happened that day.

Bergdahl’s civilian lawyer, Eugene Fidell, has been pushing for the public release of documents pertaining to the case, including Bergdahl’s 371-page statement to the Army’s senior investigating officer. Fidell recently released this transcript to the PBS NewsHour and the New York Times.

In August 2014, Army Sgt. Bowe Bergdahl was questioned by Major Gen. Kenneth Dahl (now a lieutenant general) about the circumstances around his leaving his base in Afghanistan in 2009. One of the legal issues his defense team plans to raise is the final charges include misbehavior before the enemy, which Dahl did not bring up when he spoke to Bergdahl in 2014.

The story begins before Bergdahl walked off the rural Army outpost in June 2009, launching a 45-day search. Bergdahl said he had a strict, home-schooled upbringing. A natural introvert, he took dance classes to learn how to socialize. He considered Bruce Lee a role model for his physical and mental prowess.

The now-29-year-old Idaho native said he wanted a job that would make a difference but wasn’t sure how to pursue one. He tried to join the French Foreign Legion — “it was an adventurous-sounding idea” — but after undergoing a physical wasn’t accepted because of his eyesight.

He next tried the U.S. Coast Guard. “In my mind, it has a very extremely prestigious, honorable mission on American soil.” But boot camp was more intense than he expected.

“I wasn’t planning on making contact with the Taliban at all. The idea was not to make contact with them but actually to just trail them.” — Bowe Bergdahl
“I ended up having a panic attack, about three weeks into it.” He was discharged from the Coast Guard. “The fact that I had failed at that, never settled.”

Because he got an uncharacterized discharge, he was able to reenlist. This time, he chose the Army, thinking he could prove himself among its ranks. His first choice was to be an Army scout, but they only had room for him in the infantry.

Bergdahl joined with the mindset that he would be part of a team, but he admitted in the interview that he also was aware that if someone had a personal agenda, others could suffer. “As they say in the military, ‘The sh** falls downhill.’”

He said at the National Training Center in California, he encountered some military leaders he respected, but others he questioned. Privates couldn’t use their cellphones, but sergeants could play the computer game World of War Craft. He spent his days “picking up cigarette butts and trash.”

At a live fire exercise, even though there were no targets for the soldiers, he was told to “Just burn through your ammunition.” He described squabbles among leaders and conflicting orders. “Everything I saw stayed in the back of my mind.”

Bergdahl’s initial deployment to Afghanistan was delayed for a few months so he could recover from a staph infection. When he finally joined his unit, for missions that included hunting for improvised explosive devices, he said he witnessed more troubling interactions with subordinates, unfair punishment, pettiness and confusion.

After a particularly bad run-in his unit had with a commanding officer, he said, “My platoon was suddenly taking fire from the command.” He was worried they would be sent on suicide missions, and no one would listen to his fears.

“I am not someone who is going to say, ‘Well, just let somebody else deal with it,’ especially in a situation like that. That could very easily lead to somebody being killed. So I had to come up with a plan.”

In July 2015, an Army forensic psychiatrist issued a report diagnosing Bergdahl with schizotypal personality disorder, a condition marked by distorted perceptions, eccentric behavior and “magical” thinking, at the time of his alleged misconduct.

Bergdahl wanted the ear of someone even higher ranking than his battalion commander. He learned that if a soldier disappears, a process kicks in that not only goes all the way up the Army command but the Air Force and Marines as well. “It goes all the way back to the States. It goes to every high point and everybody finds out about it.” And he would get his audience with a general.

His plan was to trigger the process and in the meantime maybe pick up some intelligence about where Taliban fighters were planting explosives. “I wasn’t planning on making contact with the Taliban at all,” he said. “The idea was not to make contact with them but actually to just trail them.”

READ MORE: ‘For about three months I was chained to a bed spread-eagle and blindfolded’

Bergdahl called the claim that he is a Taliban sympathizer “a complete joke” and refuted the notion that he is a deserter. “You would have to be completely stupid to think that you could desert in the middle of a war zone,” he said.

He started his journey to the base in Sharana, about 20 miles away, dressed in Afghan garb over his uniform and carrying a few hundred dollars in cash in case he needed it for bribes, when he was picked up by members of the Taliban on motorcycles. There were six of them and they had AK-47s, he said.

“You are not going to do any Hollywood cool guy stuff at that point,” Bergdahl said. 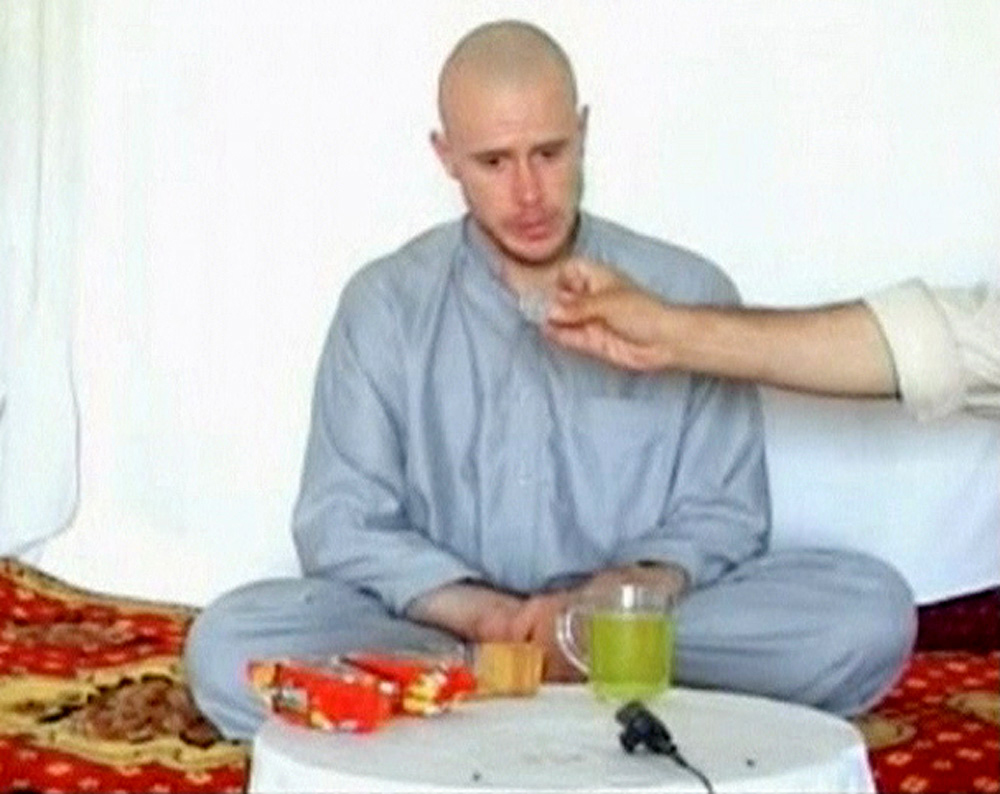 Bowe Bergdahl watches as one of his captors displays his identity tag to the camera at an unknown location in Afghanistan, July 19, 2009. Photo by Reuters TV

They tied him up and took him to a village. “My hands are behind my back. I am kneeling on the ground. They throw a blanket over my head and they leave,” Bergdahl recounted. He tried to nudge off his blindfold with his knee. “I know there [are] kids there because they are throwing pebbles at me and stuff.”

His captors transferred him from house to house, then village to village. He was taken to a mountain and met Mullah Sangeen Zadran, a senior Afghan militant. The Taliban took a cellphone video of him.

In all, Bergdahl was held for nearly five years. He was released on May 31, 2014 as part of a controversial prisoner swap for five Taliban commanders detained at the U.S. jail in Guantanamo Bay, Cuba.

Two months later, at the time of the Army’s interview, he still had a sore back from sitting cross-legged on the floor for most of the five years.

His court-martial is set to begin on Aug. 8.