Do You Have an Honor Flight Group in Your State?

“It was your duty, it was your country,” World War II veteran Marvin Murphy recently said about his mindset and that of others serving in the military at the time.

Murphy, 85, who lives in Apache Junction, Ariz., was one of 30 men taking part in the “Honor Flight” program, which brings veterans to the War World II and other memorials in Washington, D.C., for free.

Murphy explained to the PBS NewsHour’s Jeffrey Brown that after the Japanese bombed Pearl Harbor in 1941, people wanted to join in the fight whether they were age 15 or 40. “You don’t let somebody just run all over you if you can stop it. And so we decided to stop it.” 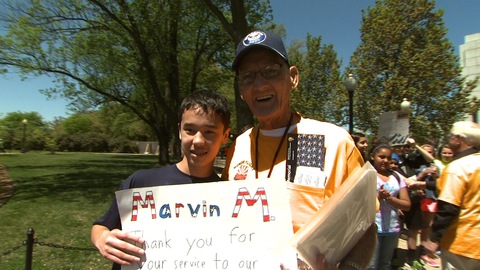 Murphy poses with a student holding a sign thanking him for his service in this video snapshot.

Those who served didn’t expect special recognition afterward. “I don’t think, if they were like me, the country didn’t owe me anything. … They took care of us while were in there.”

But when the expressions of appreciation came during his trip this year, starting at the airport with rows of waving flags and handshakes with military personnel and non-military alike, “I was speechless,” Murphy said.

That part of the visit Murphy took with his daughter Trudy was what made it such a special event, he said. “Forever I’ll be grateful. It was something, really something.”

Watch the NewsHour’s report on the Honor Flight Network.

Browse all of the NewsHour’s foreign and military coverage.