How a doll can make refugees feel more at home

Scroll through any popular doll website, and you’ll likely find dolls in tiaras, bonnets and even pillbox hats, but none with a hijab – a headscarf some Muslim women wear. Jeanne Trabulsi of Arlington, Virginia, would like to fix that.

Trabulsi was dismayed at how refugees fleeing into Europe – many of them Muslim – often were cast in political discourse as violent troublemakers. She had studied at the American University of Beirut, gotten to know many in the Arab and Islamic world, and knew better.

As more refugees resettled in the United States, she wanted to come up with ways to make them feel welcome.

Her research led her to an existing Portland, Maine-based initiative called I’m Your Neighbor, aimed at helping young children learn what it’s like to be a newly arrived immigrant or refugee, through classroom activities and books. Portland has a growing Somali community.

One of the books, called “I’m New Here” by Anne Sibley O’Brien, tells the story of three children from Guatemala, South Korea and Somalia who learn to adapt to an American school while preserving the identities of their home countries. A lesson plan for teachers encourages students to think how they can help the newly arrived students feel at ease. It can be simple things like introducing themselves and inviting them to play.

Meanwhile, one of Trabulsi’s friends mentioned that there should be a doll from the Islamic world available in the United States.

That helped spark the idea for a website Trabulsi launched this year, called the Refugee Doll Project, to help parents and teachers explain to children what it means to be a refugee and end up in a new place.

Trabulsi recruited a seamstress, and they designed patterns that anyone handy with a needle and thread can download from her website to sew outfits for their 18-inch dolls. The dresses and leggings are simple. “I want these dolls to look like the kids who go to school,” rather than traditional dress, she said.

She put everything – the clothing patterns and links to the Portland lesson plan and book – on her website, along with tips on where to buy the materials.

Trabulsi recently held a how-to at Arlington County Public Library for adults who work with children on how they could use the book and lesson plan at their schools, library reading circles, and Girl and Boy Scout troop meetings. 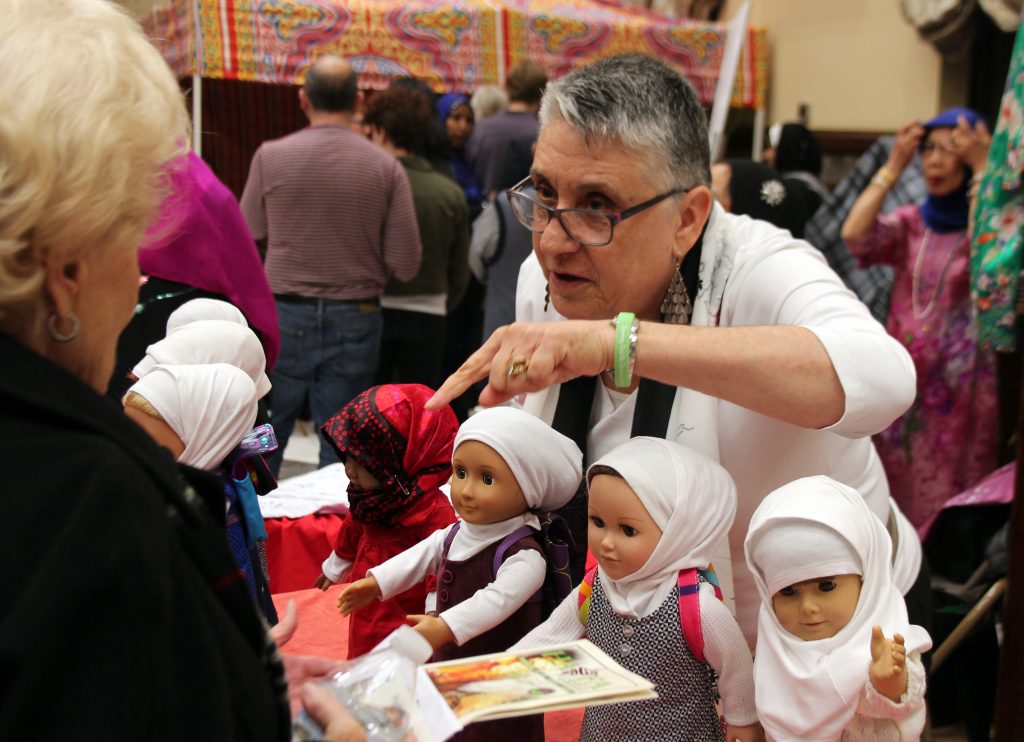 She also brought some of the dolls, representing youths from Africa, Central America and the Islamic world wearing hijabs, to the Taste of Islam open house at the Dar Al-Hijrah Islamic Center in Falls Church, Virginia, on April 23.

Many people who stopped by her table wanted to buy the prototype dolls. One admirer was Dina Abutaa, who came from Jordan at age 10 and now lives in Oakton, Virginia.

“I would love to get one for my granddaughter,” said Abutaa, who wears a hijab. “To see a doll with one is unusual, and it would make her feel like she’s not different” if she chooses to wear the head covering herself one day.

Trabulsi said she doesn’t have the capacity to sell the dolls for now. Her hope is that libraries and schools will use the guidelines on her website to create their own and make them available for rotation.

She also tells people who are interested in donating to her project that they can send their new or used 18-inch dolls and fabric to Catholic Charities’ Migration and Refugee Services office on Glebe Road in Arlington, where she will pick them up. Of course, volunteers willing to sew the outfits are welcome as well, she added.

Trabulsi said she got many blessings that day at the Islamic Center open house. “I feel like if I die today, I’m going to go straight to heaven,” she laughed.

Left: A girl holds one of the Refugee Doll Project prototypes at the Taste of Islam open house at the Dar Al-Hijrah Islamic Center in Falls Church, Virginia, on April 23. Photo by Larisa Epatko/PBS NewsHour