Orlando victims named as tributes flow around the world

The city of Orlando on Monday released the names of those killed in the worst mass shooting in modern U.S. history. Forty-nine young people who were dancing and enjoying life.

Names were added to the list throughout the day as authorities notified the next of kin. Those identified were:

“We will not be defined by the act of a cowardly hater,” Orlando Mayor Buddy Dyer said at a Monday morning press conference.

Florida Gov. Rick Scott called Orlando a “melting pot” of 20 million people who will take care of their family members.

President Barack Obama said Monday after being briefed by intelligence officials that it appeared the suspect acted alone and was influenced by extremist information on the Internet, reported the Associated Press. 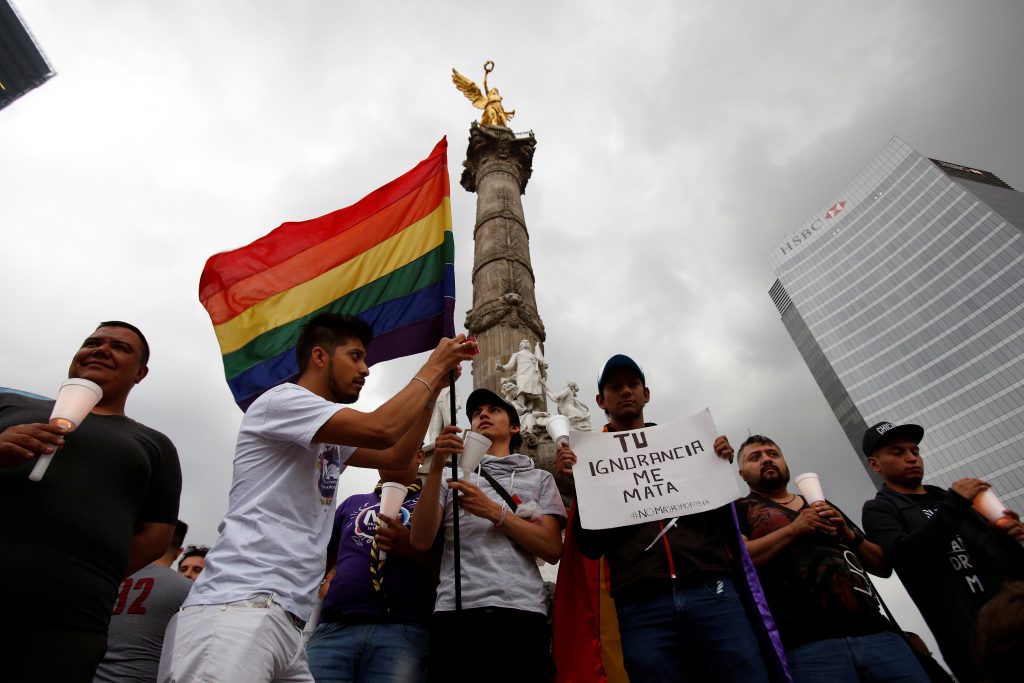 Members of the LGBT community take part in a vigil for the victims of a mass shooting at a gay nightclub in Orlando, Florida, at the Angel of Independence monument in Mexico City, Mexico, on June 12, 2016. Photo by Ginnette Riquelme/Reuters

The FBI interviewed Mateen at least two times before the weekend shooting but determined he didn’t pose a threat. Mateen legally bought an AR-15-style weapon and handgun. (Federal law enforcement officials later clarified that the long gun was a Sig Sauer MCX.)

More details emerged Monday on the mass shooting. Early Sunday, Mateen got in a gun fight with a uniformed officer employed by the club. As more officers arrived, another shootout ensued.

Mateen then took at least a dozen hostages in a bathroom.

When law enforcement believed further loss of life was imminent — from speaking with Mateen — they used an armored BearCat vehicle to punch a hole in the bathroom wall, through which some people escaped. When Mateen exited, armed with a handgun and long gun, he was killed by police.

Mateen lived in Fort Pierce, about 120 miles south of Orlando. He was born in New York to parents from Afghanistan. Prior to the carnage, Mateen called 911 and pledged support to the Islamic State group. The militant group later called him one of their soldiers. 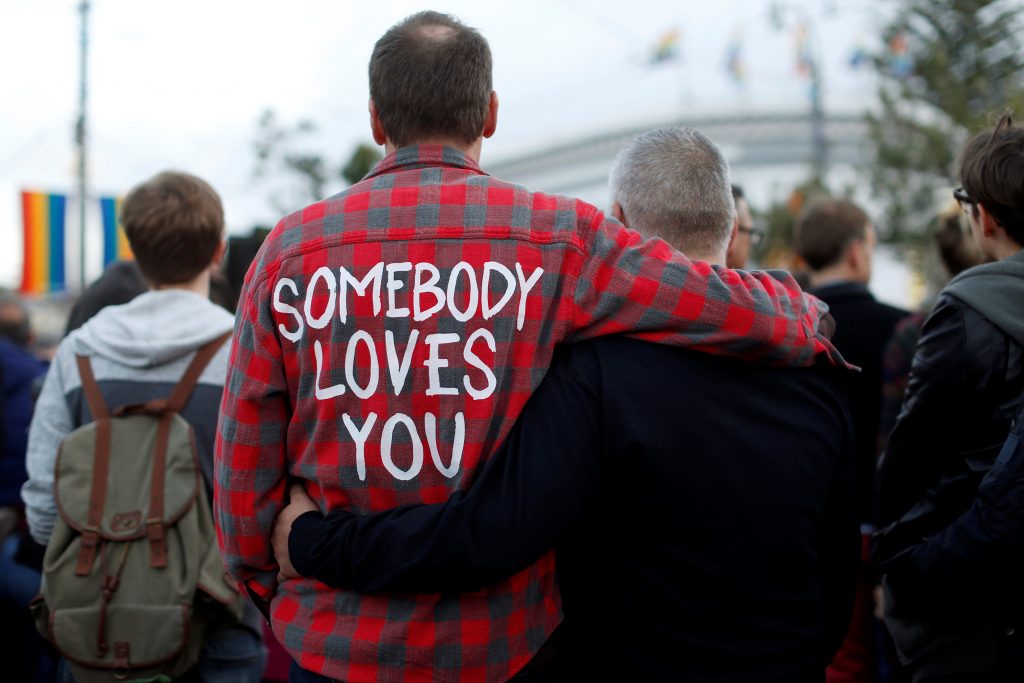 People remember the victims of the Orlando shooting at a vigil in San Francisco, California on June 12. Photo by Stephen Lam/Reuters

Overnight, federal agents searched Mateen’s apartment, along with that of his parents, who live in Port St. Lucie, Florida.

“I am shocked as you are. … I don’t approve of him, what he did,” Mateen’s father, Seddique Mateen, said on NBC News.

When asked if he showed anti-gay tendencies, Seddique Mateen said his son once saw two men kissing in Miami, and “he got a little bit ticked off.”

“I believe in forgiveness. What my son did is a horrible thing,” the elder Mateen said.

Meanwhile, tributes to the victims poured in from cities in the U.S. to Berlin, Germany, and Seoul, South Korea. 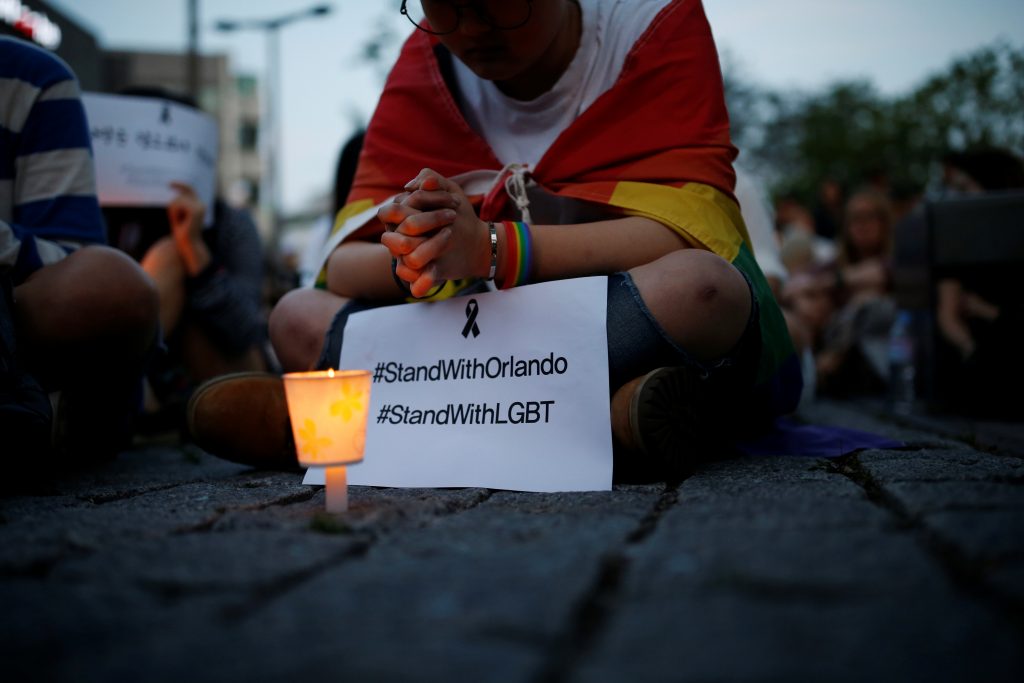 A woman prays during a candlelight vigil in solidarity for the victims of the Orlando gay nightclub mass shooting, in Seoul, South Korea, on June 13. Photo by Kim Hong-Ji/Reuters

“Love is stronger than hate,” said the Rev. Amanda Henderson, director of the Interfaith Alliance at a vigil in Denver. “The voices that seek to divide us will not work.”

Hashtags on Twitter, including #loveislove, #OrlandoUnited and #WeAreOrlando, brought mourners together online to show support and resiliency.

Thanks to @louisvillemayor Greg Fischer & all the elected officials who showed their love tonight. #WeAreOrlando pic.twitter.com/6Rmj129HxB

#loveislove at the end of the day we are all human. Does not matter what you’re #WeAreOrlando pic.twitter.com/XExdWhRQZn

Left: A man places a rose and a rainbow flag for the victims of the shooting at a gay nightclub in Orlando in front of the U.S. Embassy in Berlin, Germany, on June 13. Photo by Hannibal Hanschke/Reuters