What we know about the California mass shooting

Hundreds of people gathered at a candlelight vigil Thursday to honor the 12 people shot and killed the night before at the Borderline Bar and Grill in Thousand Oaks, California.

Among the victims was Sgt. Ron Helus, a 29-year veteran of the Ventura County Sheriff’s Office, who ran into the building after hearing gunshots. He was set to retire next year.

“When I told her (his wife) that we had lost her hero, I said to her: ‘Because of Ron, many lives were saved,’” said Ventura County Sheriff Geoff Dean, reported the Associated Press. “And she looked at me through her tears and she said: ‘He would have wanted it that way.’”

Witnesses described a tall man, wearing all black with a hood covering part of his face, entering the bar at around 11:20 p.m. Wednesday.

Some patrons ran for the exits, hid in bathrooms or dove for cover behind pool tables. Others used barstools to break a window and escape, according to the AP.

Remembering those killed on Wednesday, including a sheriff’s deputy, an aspiring soldier, a Marine Corps veteran, a survivor of the Las Vegas massacre and a Pepperdine University freshman.

Dean said the suspect used a Glock 21 .45-caliber handgun, designed to hold a magazine of 10 rounds, but this one was fitted with an extended magazine. The gun was legally purchased, he added.

The incident in California came two weeks after a gunman killed 11 people and injured seven at the Tree of Life synagogue in Pittsburgh, Pennsylvania, while Shabbat morning services were being held. Nine months ago, another mass shooting occurred in Parkland, Florida, where 17 students and teachers were fatally shot at Marjory Stoneman Douglas High School. 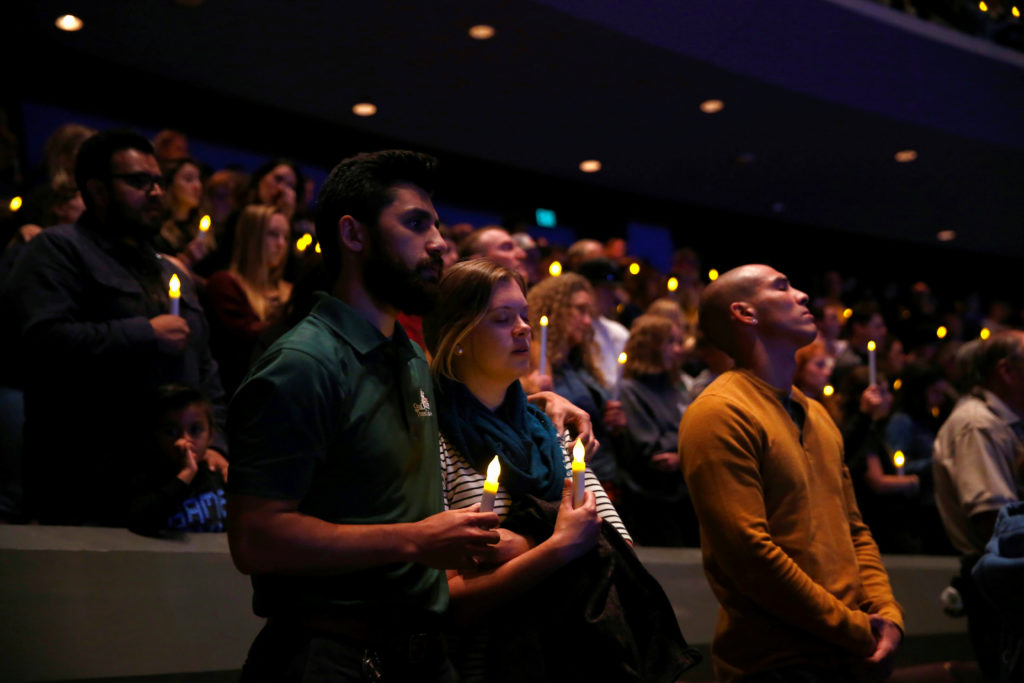 Mourners gather to remember the victims of the mass shooting. Photo by Eric Thayer/Reuters

Those killed, according to parents’ accounts, published reports and police, are:

One of the first to respond was Sergeant Helus, who was shot multiple times and died later at the hospital. “He died a hero,” Dean said.

Today we mourn the loss of Sergeant Ron Helus who gave his life serving the community. Please keep his family and the families of the victims in your thoughts and prayers. pic.twitter.com/EwDsnPRDCs 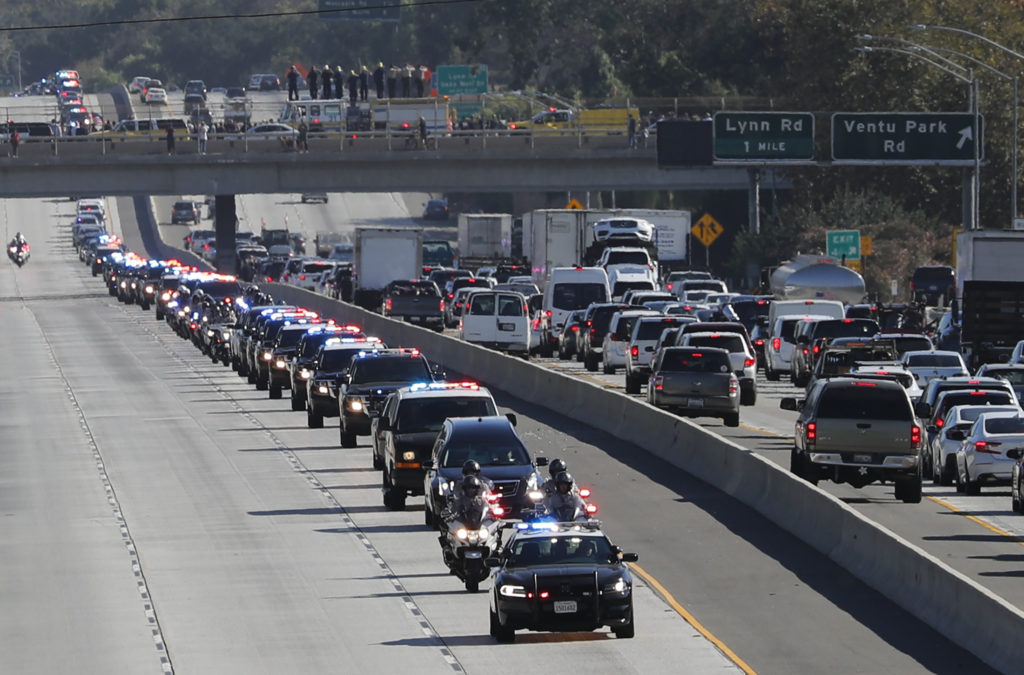 A procession for the body of Sgt. Ron Helus, who died in the shooting in Thousand Oaks, travels down Ventura Highway 101 on Thursday. Photo by Mike Blake/Reuters

One of the parents, Jason Coffman, father of 22-year-old Cody, told reporters that his son just wanted to be a good big brother to his siblings.

Some of the patrons attending “College Country Night” at the bar that evening were local students from nearby California Lutheran University.

According to a statement from university President Chris Kimball, Meek was a recent graduate of the school and “one of the precious lives cut short.”

“I know that our close-knit campus family is at once strong and in need,” Kimball said. “We need one another and will draw strength from one another in the days ahead.”

While Pepperdine University students were mourning the loss of freshman Alaina Housley, they had to shelter in place due to a forest fire near the Malibu-based campus. 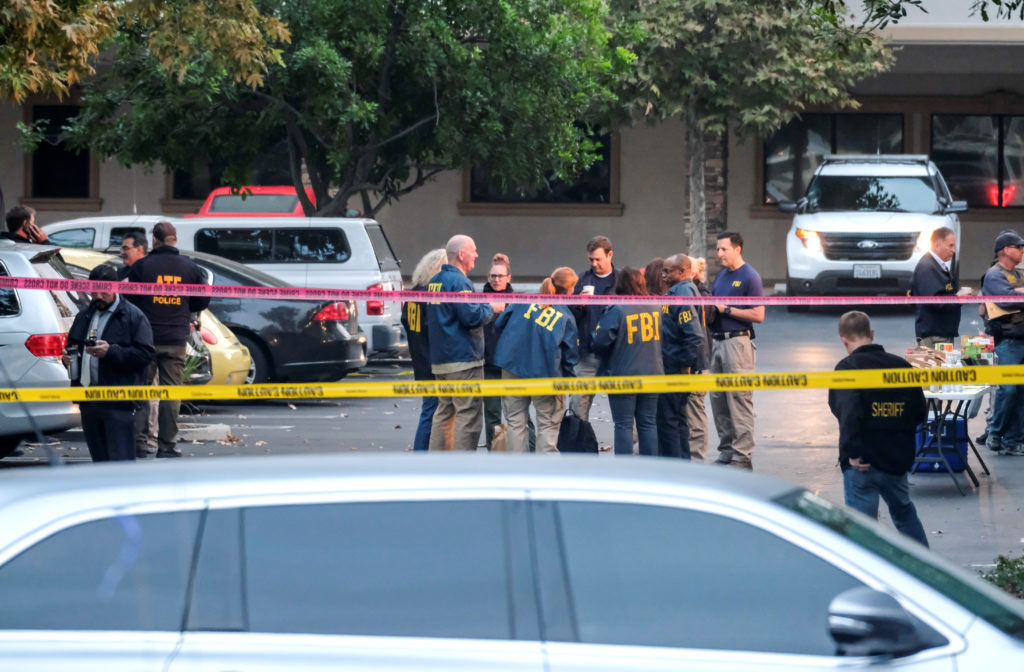 Members of FBI investigate the site of a mass shooting at a bar in Thousand Oaks, California, on Nov. 8. Photo by Ringo Chiu/Reuters

Authorities identified the suspect as 28-year-old Ian David Long, a former Marine. The U.S. Marine Corps released Long’s service record, which said he served from 2008 to 2013, and his ranking was a corporal as a machine gunner, ABC News reported. He was deployed to Afghanistan from Nov. 16, 2010 to June 14, 2011, the Marine Corps said.

It is believed that Long killed himself at the bar, where his body was found by responding officers, Dean said.

On Thursday, FBI officials searched a residence believed to be Long’s in Newbury Park, California, close to Thousand Oaks. Investigators have not yet identified a motive.

Police had previous run-ins with Long, including a call to his home where he was acting irrationally, Dean said. A mental health crisis team determined at that time that he should not be taken into custody, the AP reported.

President Donald Trump praised the first responders and local law enforcement. “Great bravery shown by police. California Highway Patrol was on scene within 3 minutes, with first officer to enter shot numerous times. That Sheriff’s Sergeant died in the hospital. God bless all of the victims and families of the victims. Thank you to Law Enforcement,” the president said in a tweet.

Gavin Newsom, governor-elect of California, held a news conference the day after the shooting. “This is America. It’s got to change,” he said. “This doesn’t happen anywhere else on planet Earth.” Newsom said he supports people’s right to bear arms, but he is concerned about the amount of gun violence in the country and thinks California should lead the way on gun controls.

RESOURCE: How to talk with children in the immediate aftermath of a mass shooting

Left: Mourners attend a vigil for the victims of the mass shooting, at the Thousand Oaks Civic Arts Plaza in Thousand Oaks, California, on Nov. 8. Photo by Mike Blake/Reuters