The Supreme Court upheld President Donald Trump’s travel ban by a narrow 5-4 ruling on Tuesday, touching off fiery reactions on Capitol Hill and a jubilant response from the president.

Five justices said the ban preventing most people from Iran, Libya, North Korea, Somalia, Syria and Yemen, in addition to government officials from Venezuela, from entering the U.S. does not discriminate against Muslims or exceed the president’s authority.

“In this era of worldwide terrorism and extremist movements bent on harming innocent civilians, we must properly vet those coming into our country,” he said in a longer statement issued by the White House.

“While we have the most generous immigration system in the world, it has repeatedly been exploited by terrorists and other malicious actors who seek to do us harm,” the Department of Homeland Security said in another statement. “President Trump’s executive actions take important steps to protect the American people by allowing for the proper review and establishment of standards to prevent terrorist or criminal infiltration by foreign nationals.”

Some advocates liken the ruling to segregation

“Not since key decisions on slavery, segregation in schools, and Japanese-American incarceration, have we seen a decision that so clearly fails to protect those most vulnerable to government-led discrimination,” said Farhana Khera, executive director of Muslim Advocates, which is based in Oakland, California. She vowed to fight against the ban until the president’s “anti-Muslim agenda is overturned for good.”

Welcoming foreigners to U.S. shores was key to the country’s founding principles, said Cyrus Mehri, an Iranian-American civil rights lawyer. “While today’s decision sadly fails to recognize that the travel ban is a discriminatory and unlawful departure from this tradition, I am hopeful that we can go back to our welcoming roots in the future,” he said.

Michael Keegan, president of People For the American Way, an advocacy group that fights “right-wing extremism,” called the ban “a gross violation of the First Amendment” that makes “a mockery of the court’s commitment to religious freedom.”

Reactions on Capitol Hill are all over the map 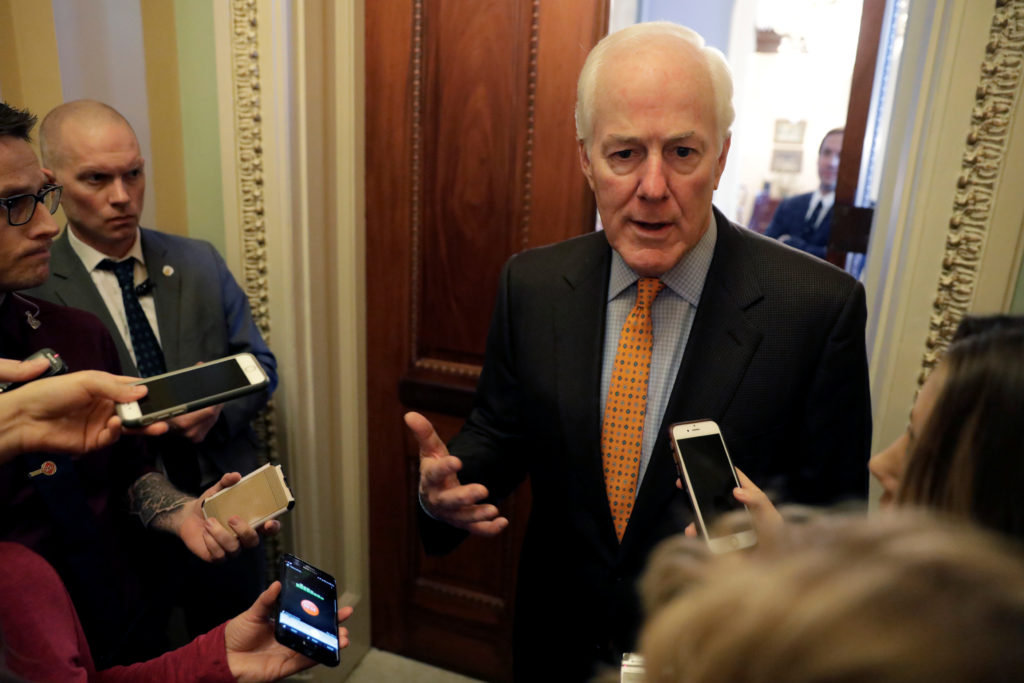 “This is not a Muslim ban,” Sen. John Cornyn, R-Texas, told reporters in the halls of the Senate. “It’s not anything that President Obama didn’t do when he was president, so I’m not surprised the Supreme Court ruled the way they did.”

Asked if Trump was trying to restrict entry of Muslims or other religious groups into the U.S., Cornyn said, “I think he’s trying to keep the country safe.”

House Homeland Security Committee Chairman Michael McCaul, R-Texas, also came out in support of the ruling. “We should not allow people from adversarial states or conflict zones into America until they have been vetted to the fullest extent possible,” he said.

Sen. Chris Coons, D-Del., however, said just because the travel ban was ruled constitutional, “doesn’t mean that it’s right, that it’s justified or that it reflects America’s values.” Coons said he plans to introduce legislation to make clear that the U.S. does “not tolerate discrimination based on religion or nationality.”

At a rally on the steps of the Supreme Court, Rep. Joe Kennedy III, D-Mass., called the decision “heartbreaking.” “This must bring us together as a country,” he said. Watch more of the rally:

“A gloating braggart is not going to win at the end of the day,” Rep. Keith Ellison, D-Minn., first Muslim elected to Congress, said on CNN. Those who support religious liberty and freedom will prevail, he added.