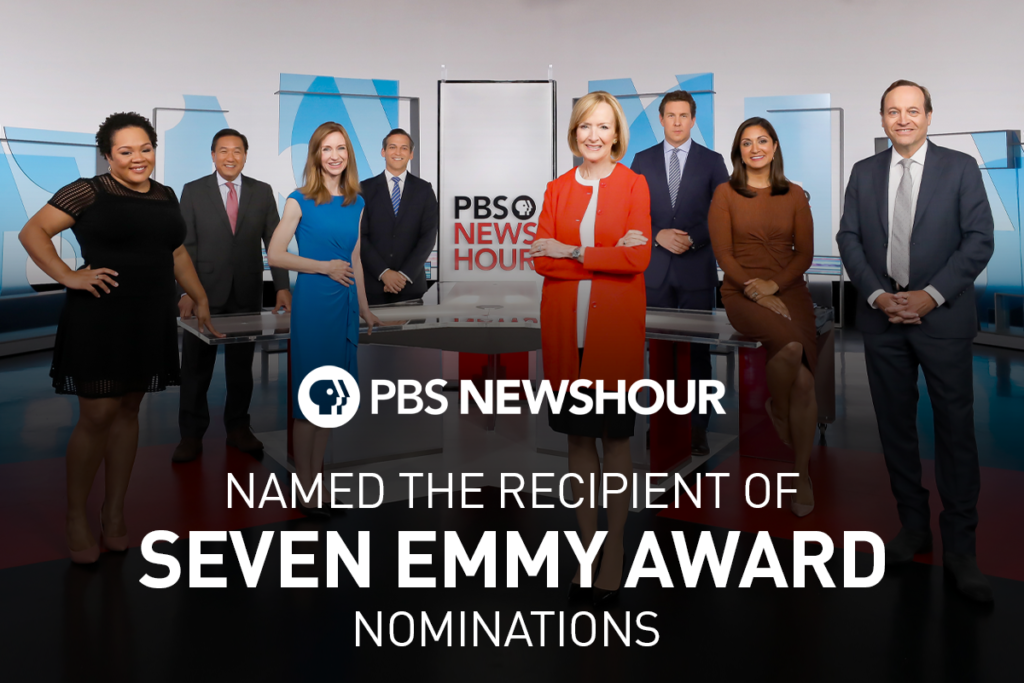 ARLINGTON, VA (August 6, 2020) – PBS NewsHour was today named the recipient of seven nominations for the 41st News & Documentary Emmy Awards from the National Academy of Television Arts & Sciences. The Emmy Awards will be presented during two virtual ceremonies – News categories on Monday, September 21 and Documentary categories on Tuesday, September 22 – streamed live on NATAS’ dedicated viewing platform powered by Vimeo, available on the web at watch.theEmmys.tv and via The Emmys apps for iOS, tvOS, Android, FireTV, and Roku.

A full list of PBS NewsHour nominees with links to segment or series coverage and credits below:

Category: Outstanding Coverage of a Breaking News Story in a Newscast

After nearly five years of brutal warfare and conquest, the Islamic State’s “Caliphate” had been hammered down to a few square acres in Eastern Syria; by early Spring of 2019, the Caliphate was primed to fall. Special correspondent Jane Ferguson reports on why the extremist group’s tenacity could be an indicator of a different battle to come.

Inside the Honduran Migrant Crisis

Part One: Why families by the thousands are fleeing Honduras for the U.S.

Category: Outstanding Continuing Coverage of a News Story in a Newscast

The deadly stranglehold of gang violence in Honduras drives tens of thousands of desperate residents to flee north to request asylum in the U.S. But few receive it, often due to a lack of documentation of the persecution they faced at home. Special correspondent Marcia Biggs reports from San Pedro Sula with harrowing stories of the fates of migrants who made it to the U.S., only to be deported.

The Opaque Operations Involved in Fighting the Taliban

The U.S. has been fighting in Afghanistan since shortly after 9/11, ousting the Taliban and their harsh interpretation of Islam from power that fall. But the insurgent group as which it reformed has plagued Afghanistan with violence ever since. Now, the war’s brutal tactics are shifting into the shadows. Special correspondent Jane Ferguson reports on her recent meeting with members of the Taliban.

Making Her Own Sound: Redefining Who Can Be A Musician

Gaelynn Lea is transforming our cultural understanding of who can be a musician. A congenital disability called osteogenesis imperfecta caused her bones to break more than 40 times while she was in the womb. But the violinist is known for her haunting original songs, innovative interpretations of traditional folk music and growing role as an advocate for disability rights. Chief arts correspondent Jeffrey Brown reports.

Part One: Antarctic penguins have existed for 60 million years. Can they survive climate change?

Part Two: Antarctica is losing ice at an accelerating rate. How much will sea levels rise?

Part Four: Can Antarctica remain a refuge for science and peace?

PBS NewsHour traveled to one of the world’s last great wildernesses to give viewers an unprecedented look at the threat from a rapidly changing environment.

This series gathered the latest scientific evidence to show how human-caused climate change is threatening not just the iconic species that live on the continent but also endangers human communities thousands of miles away. As the sea and air around them warm up, Antarctica’s vast ice sheets and glaciers are disappearing at an alarming rate, threatening potentially catastrophic sea-level rise.

Producers Mike Fritz and Emily Carpeaux and correspondent William Brangham also examined the record-setting tourist boom happening in Antarctica, the remarkable history of how the continent was first discovered, and the unique diplomatic treaty that’s made Antarctica a haven for international scientific cooperation and research.

Part One: Why another flu pandemic is likely just a matter of when

Part Two: Why the race to stop the next flu outbreak starts at state fairs and the beach

Part Three: A universal flu vaccine could finally be within sight

Despite the availability of vaccines, the flu still kills tens of thousands of people in the U.S. each year, and hundreds of thousands more worldwide. But public health officials fear that an even graver threat lies ahead: the emergence of a new, much more deadly flu virus. As correspondent William Brangham reports, the scenario has occurred before.

Part One: Inside the Mueller report, a sophisticated Russian interference campaign

Part Two: Why ‘numerous links’ between Trump campaign and Russia didn’t add up to conspiracy

Part Five: What came out of the Mueller report? Here’s what you need to know in 6 minutes

The 448-page Mueller report contains copious detail about how Russia interfered in the 2016 U.S. presidential election, both by using social media to influence American voters with misinformation and by hacking into the Clinton campaign’s computers. Russian operatives also connected with WikiLeaks to release the stolen material. Lisa Desjardins and William Brangham share some of the key findings.