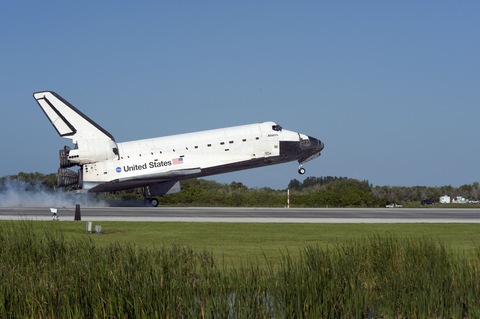 The space shuttle Atlantis glided to a landing with six astronauts aboard at NASA’s Kennedy Space Center in Florida on Wednesday, capping the orbiter’s 25-year career in space.

The 12-day flight — to bring a Russian-built research module to the International Space Station, among other tasks — was Atlantis’ last scheduled mission. This year marks the final flights for the two other operating shuttles, Discovery and Endeavor, before the entire fleet retires to make room for another mode of transporting humans into space.

NASA has not officially announced where all the remaining space shuttles will go once they have made their final runs, but has said it is planning to transfer Discovery to the National Air and Space Museum.

The Smithsonian hopes to replace the shuttle Enterprise, which never flew in space, with Discovery at the National Air and Space Museum’s Udvar-Hazy Center in Chantilly. The cost of preparing the shuttle for display and transporting it to its new location, which NASA puts at $28.8 million, still needs to be settled.

Institutions in the running for the other two shuttles include the Intrepid Sea, Air and Space Museum in New York City; the privately run Kennedy Space Center Visitor Complex in Florida; and the Johnson Space Center outside Houston, Texas.

The National Air and Space Museum chose Discovery because “it’s our custom to try to acquire the first or the oldest of a series of aircraft or spacecraft,” said Valerie Neal, the museum’s space shuttle curator. Two other older space shuttles were destroyed during missions: Challenger in 1986 and Columbia in 2003.

Discovery is next in line, said Neal. “It was the third orbiter that flew into space and it’s now the oldest one,” and has flown the most missions — 39, she said.

Atlantis’ missions total 32. It will be the designated rescue vehicle for the other two shuttles’ final flights. NASA is hoping to send Atlantis on one last space station run in June 2011 if it can get authorization to extend the shuttle program.

Discovery’s last flight is scheduled for Sept. 16 on an eight-day mission to carry a module to conduct experiments, spare parts and a cargo carrier to the space station. In addition, it will ferry the first humanoid robot into space, Robonaut 2.

Endeavor is expected to fly a 10-day mission in November or later.