How Are Drones Used in the U.S.? 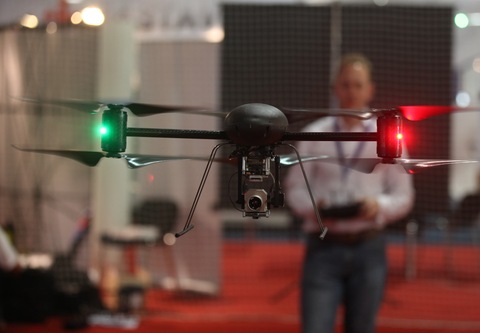 An Air 2 Air Ltd. Draganflyer Helicopter Base Unit camera holder is exhibited at an international airshow in Farnborough, U.K., on July 22, 2010. Photo by Simon Dawson/ Bloomberg via Getty Images.

The drone debate usually centers around U.S. use of the unmanned aircraft in other countries, such as Afghanistan, Pakistan and Yemen, to target terrorists. But how are drones used in the United States and how far are we from miniature helicopters flying up to our windows and peeking in?

The answer isn’t easy. The technology for such drones currently exists, but other factors come into play, including the costs of operating the flying machines and the public’s acceptance of their use.

Drones are remotely piloted aircraft that can be the size of a Boeing 737 or as small as a magazine. They’re generally used for the three Ds: dull, dirty or dangerous missions, said Peter Singer, director of the Center for 21st Century Security and Intelligence at the Brookings Institution.

Drones can fly for long durations and in inhospitable environments. They can fly into a hurricane to measure its force or into a disaster area like the one left behind after the meltdown at the Fukushima nuclear plant in Japan triggered by the 2011 earthquake and tsunami.

People can fly model airplanes without restriction, but it is illegal to operate a drone as a civilian above 400 feet and beyond line of sight for any commercial reason unless they have received permission from the Federal Aviation Administration.

The FAA issues “certificates of authorization” to public entities, such as NASA, National Oceanic and Atmospheric Administration and other federal agencies, police departments and universities. In anticipation of growing drone use, Congress has tasked the FAA to figure out by 2015 how civilians can use drones beyond the airspace restrictions and licensing requirements.

Eighty-one public entities have applied for the special certification, according to FAA records obtained by the Electronic Frontier Foundation. (See the list or find the applicants on a map.) 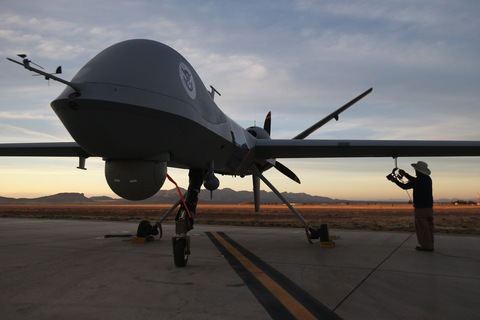 A Predator drone operated by the U.S. Office of Air and Marine undergoes a maintenance check before its surveillance flight near the Mexican border on March 7 from Fort Huachuca in Sierra Vista, Ariz. Photo by John Moore/Getty Images.

So how are drones used once they’re certified? Here are some examples:

“The way the police use [unmanned aircraft] is an interesting question moving forward,” said Singer. “Are these just like the way police have traditionally used airplanes and helicopters, or something different? Do you have a large system that flies above a city, or tiny systems that you pack into the trunk of a police car” and deploy to track down fleeing suspects?

The American Civil Liberties Union raised some red flags over the use of drones in a December 2011 report. The group expressed concerns over the potential invasion of privacy and about “mission creep” — things like drones being used to fire tear gas at protesters.

Some municipalities, such as Charlottesville, Va., have restricted drone use in law enforcement, and the Seattle Police Department agreed to return its two unused drones because of the public outcry, reported the New York Times.

What’s happening now is akin to the 1980s when people were figuring out how computers could work to the public’s advantage and be used for things besides as giant calculators, said Singer. “Now, you’re talking about a computer that can essentially get up and fly and walk,” and all the privacy implications that go with it.

Although ideas about privacy seem to be loosening with each new generation — witness the growing posting of personal photos and videos online, Singer noted — there’s still public discomfort over drones, partly because they’re able to operate for such long durations and partly because they collect information not only about the intended target but everything else around it.

“An unmanned plane is always gathering, storing and sharing information about the world around it,” Singer said. “It always has the camera, versus a manned plane, where my eyes are not always sharing what it’s seeing.”

Nonetheless, thousands of drones could be used commercially in the United States in the next few years, the PBS program NOVA reported in “Rise of the Drones.”

So how could they be used?

Singer declined to speculate, but said some options discussed for daily life include the “tacocopter” — a delivery system for tacos where customers send in their GPS coordinates and get their meal by air. It’s a concept that made a big splash a year ago but never got off the ground, so to speak. Or another use could be for medical purposes in rural, hard-to-reach areas, where doctors could send blood samples via “quadcopters” to labs for testing, thus skipping rough roads and getting results much faster.

“Where this really takes off is where innovation crosses with profit-seeking, where people come up with entirely new roles that we haven’t even thought about yet,” he said.