A youth soccer team and its coach spent a 12th day huddled in a damp cave Wednesday in northern Thailand as rescuers worked to come up with a plan to save them.

On Monday, British divers who were part of an international rescue team found all 12 boys, aged 11 to 16, and their coach alive but hungry in the Tham Luang Nang Non cave system. They were on a ledge about 440 yards from an underground chamber called Pattaya Beach, where they had moved to avoid rising water. 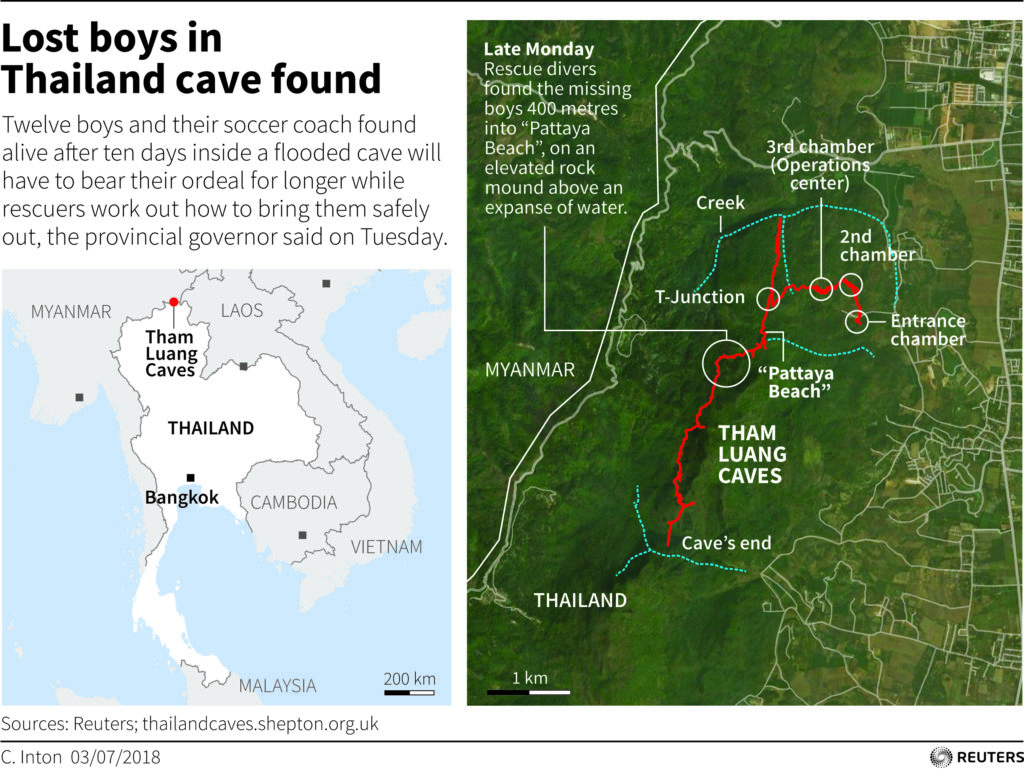 The divers who found the players said it took about three hours to reach them.

The children and their coach are being supplied with food and medical care by Thai Navy Seals. They also were given phone lines to speak to their families. 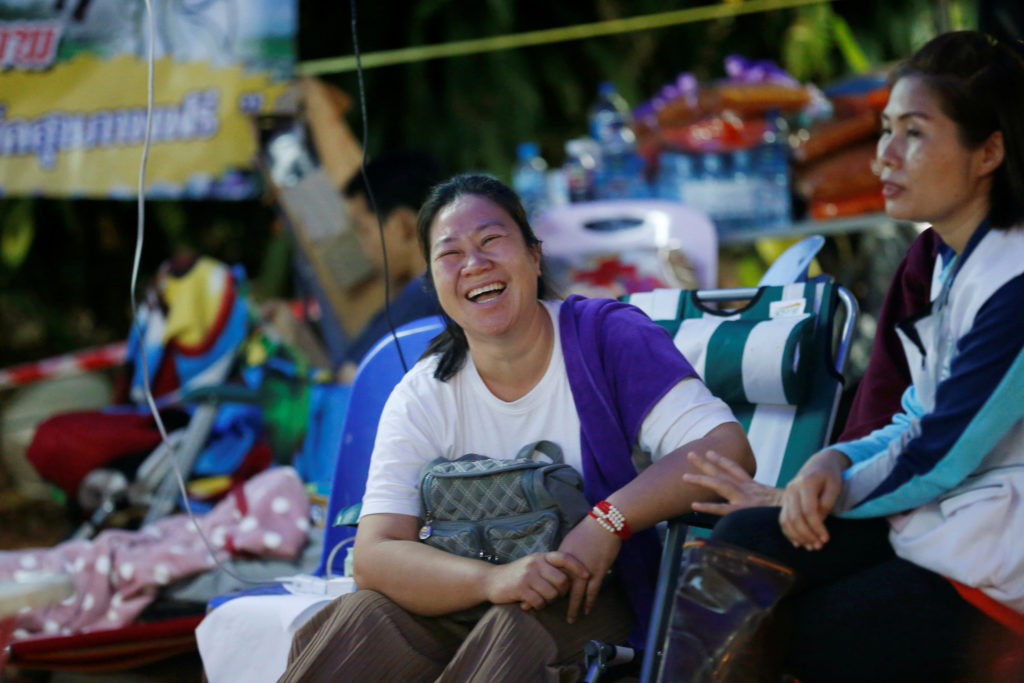 Family members, waiting outside the caves, felt immense relief when all members of the youth soccer team were found alive. Photo by Soe Zeya Tun/Reuters

What can rescuers do?

Rescuers have three options: train the boys to dive their way out; wait for the rain to slow and water to recede so they can pump water out; or drill a new hole into the cave or use another natural entrance to free them, Anmar Mirza, U.S. National Cave Rescue Commission coordinator, said on CBS This Morning. 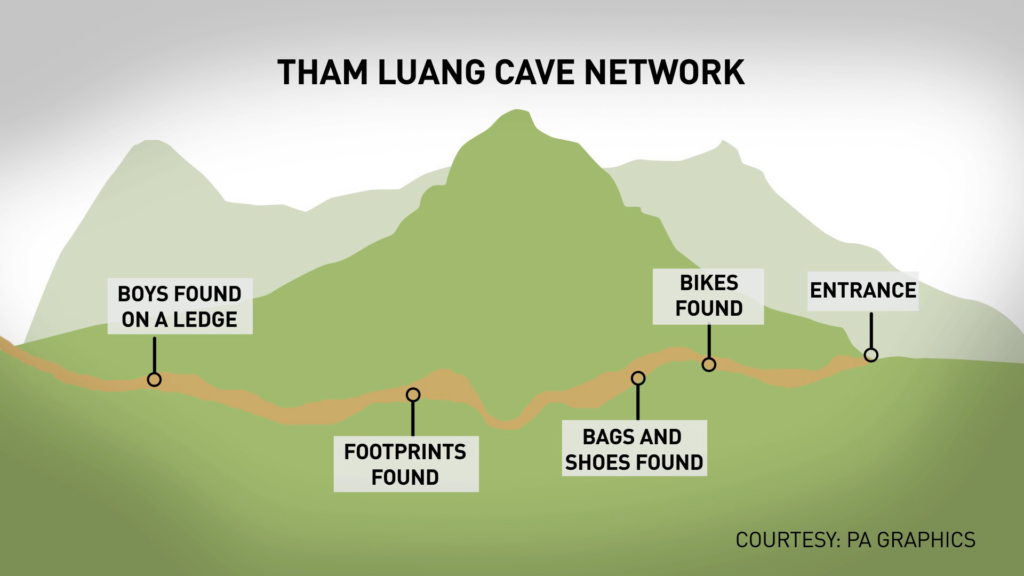 The first option — training the boys to dive — is risky but could mean a quicker extraction. People who specialize in cave diving normally train for hundreds of hours, but instructors could shorten the time if they feel the boys are ready, Mirza said. The dangers of diving through the narrow passageways include the boys possibly panicking, losing their masks, or other equipment malfunction, he added, and monsoon rains and the risk of flooding also puts pressure on their training. 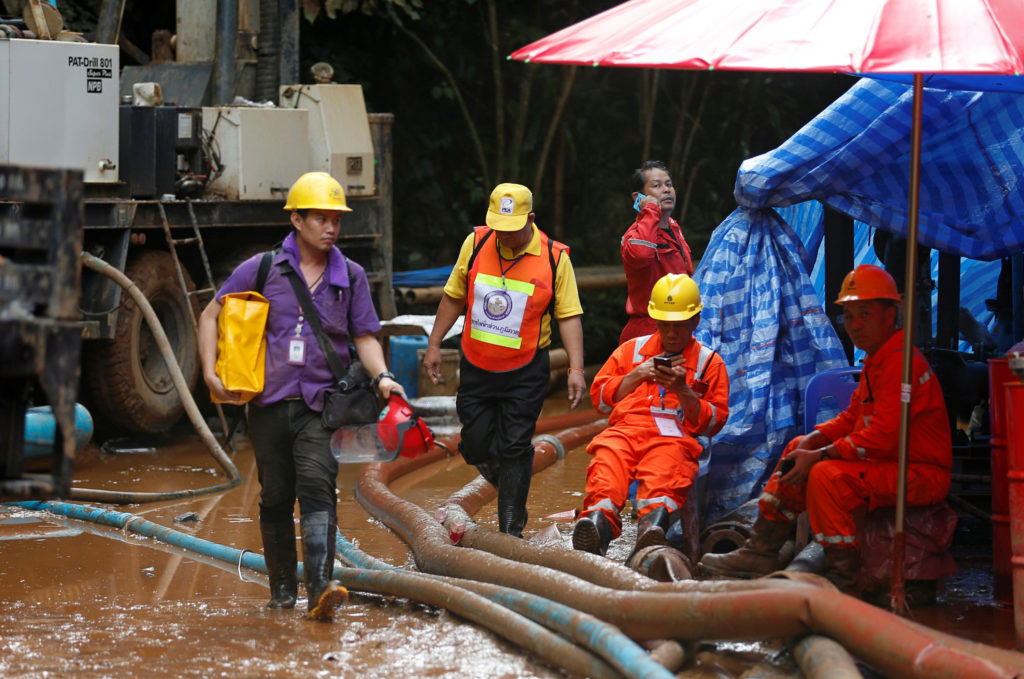 Tubes are used to try to pump water from the network of caves leading to where the boys are trapped. Photo by Soe Zeya Tun/Reuters 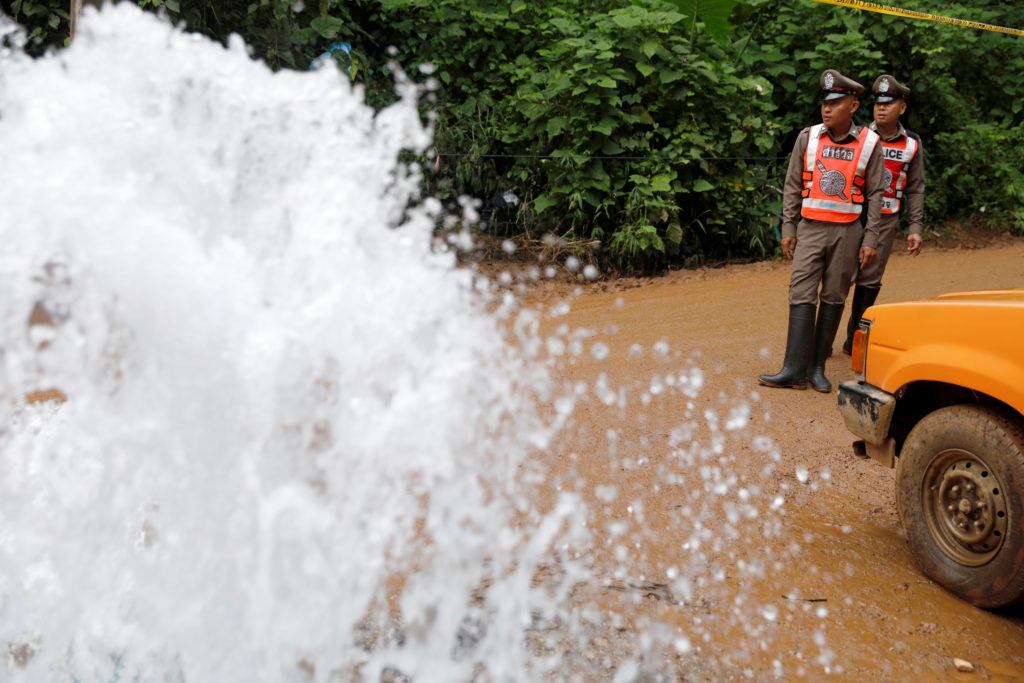 Generators are powering water pumps and refilling oxygen tanks for divers at the scene. Photo by Soe Zeya Tun/Reuters 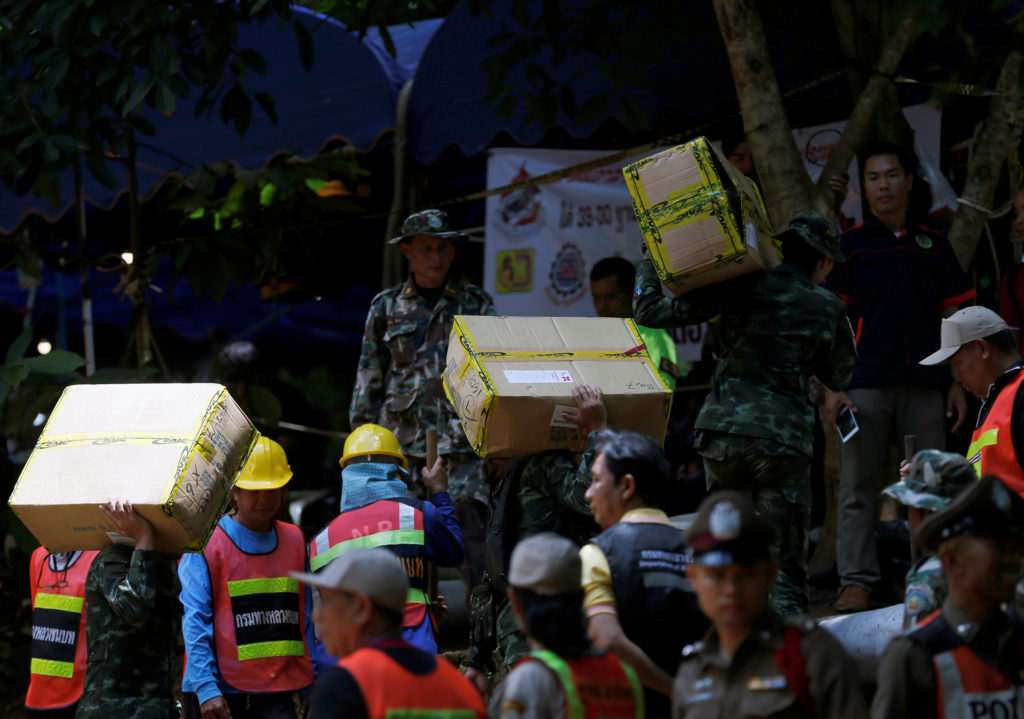 Soldiers and rescue workers carry supplies and food to the caves. Photo by Soe Zeya Tun/Reuters

If rescuers do go with the diving option, the boys — some of whom can’t swim — would be trained to breathe through scuba masks. Mermaid Subsea Services in Bangkok has been in talks with Thai authorities to supply the masks, the Guardian reported. They also would wear wetsuits, boots and helmets.

The boys would travel along a static line, which is already in place, with oxygen tanks positioned along the route in case their oxygen supply runs short. Pumps are working to remove standing water from the caves to reduce the amount of time they would have to be underwater. 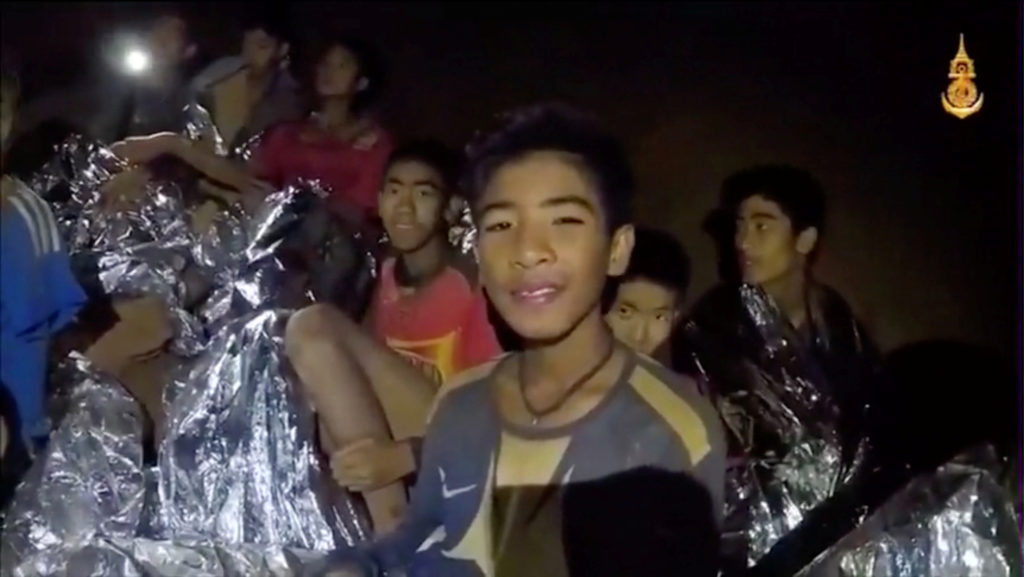 The boys were found July 2, 10 days after their coach led them into the Tham Luang cave system. Thai Navy Seal/Handout via Reuters TV 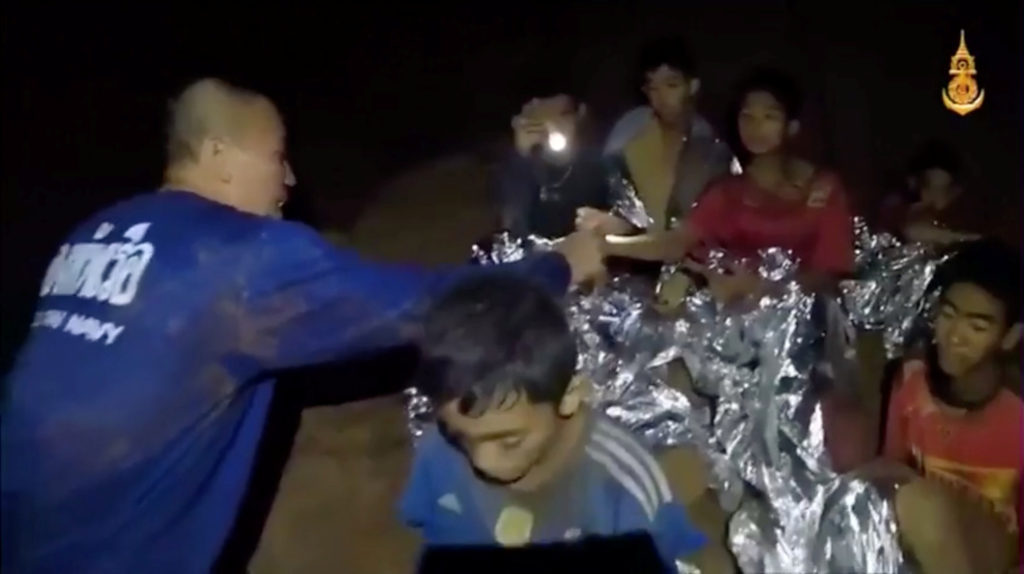 A medic treats the boys in Chiang Rai, Thailand, in this still image taken from a July 3 video by a Thai Navy Seal. Thai Navy Seal/Handout via Reuters TV

It’s unclear how long a rescue will take. Narongsak Osottanakorn, governor of Chiang Rai province, told reporters that he didn’t want to predict when the team would be freed. “All I can say is everyone is working very hard here. Everyone is working their hardest. They haven’t rested since day one,” he said.

Left: A spirit and Buddha statues are seen in front of a cave near the Tham Luang cave complex in the northern province of Chiang Rai, Thailand. Photo by Soe Zeya Tun/Reuters