5 years after the world’s largest garment factory collapse, is safety in Bangladesh any better?

Officials discovered the top four floors were constructed without building permits. The owner of the building, Sohel Rana, was convicted on corruption charges and sentenced to three years in prison. Murder charges are still pending against him.

Since the collapse, several initiatives have focused on improving factory safety. But researchers, retail alliances and human rights groups said more work needs to be done. Here’s what we know.

Bangladesh is the second largest clothing manufacturer in the world, second only to China. The garment industry employs millions of people in Bangladesh, across about 7,000 facilities, said Paul Barrett, deputy director of New York University’s Stern Center for Business and Human Rights, which has been following Bangladesh’s garment industry since the factory collapse. “The remembrance of what happened in April 2013 is very powerful and still symbolizes a lot to the people of Bangladesh.”

The garment industry in Bangladesh was fraught with problems when the building collapse happened. Fires often broke out at factories, and workers complained about not getting paid, said James Moriarty, former U.S. ambassador to Bangladesh from 2008-2011. “You got to a point where the problems had to be addressed absent a Rana Plaza. But Rana Plaza definitely was the catalyst to make it happen when it did.” 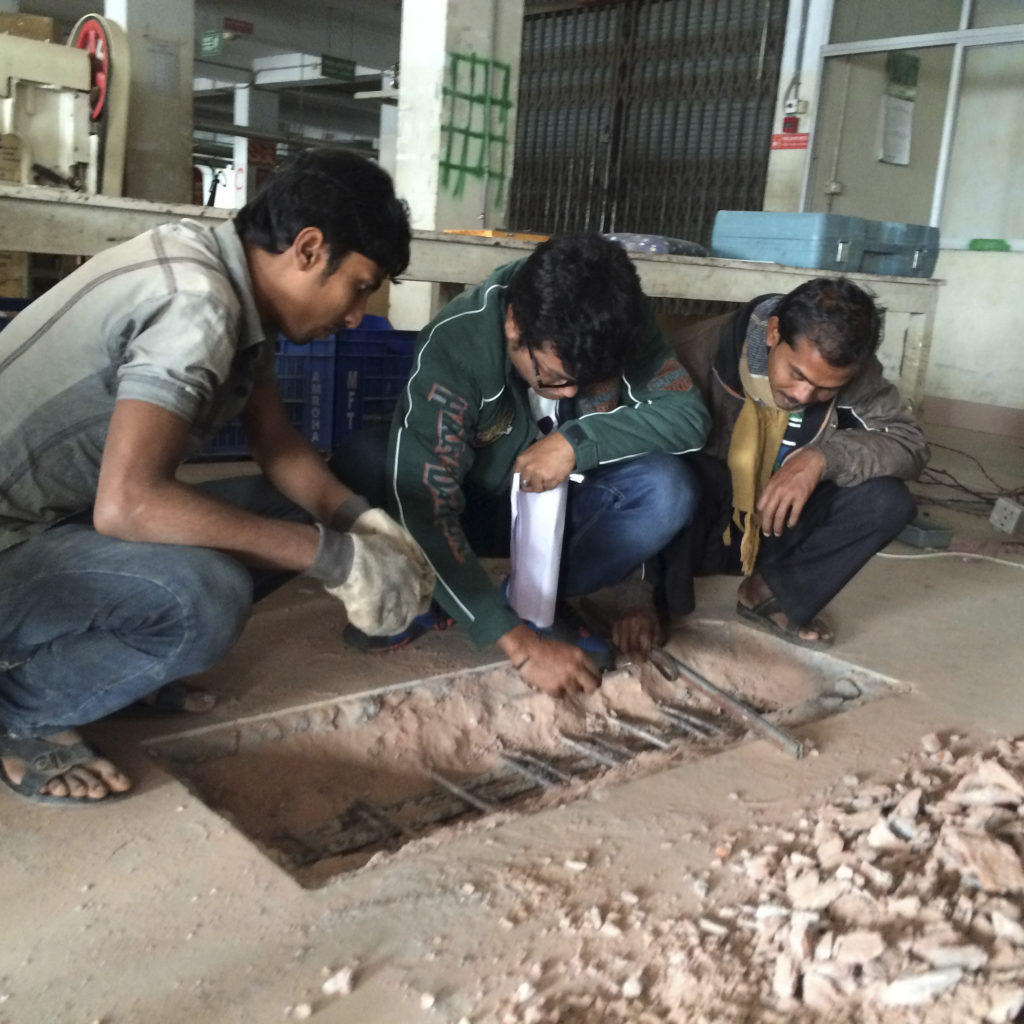 Workers conduct a safety assessment at an Adorn Knitwear garment factory in Dhaka, Bangladesh, on Dec. 9, 2014. Photo by Krista Mahr/Reuters

In the weeks following the disaster, two coalitions representing major retailers joined forces and committed to making factories that supply them safer.

One was the Alliance for Bangladesh Worker Safety, composed of mostly U.S. brands, such as Gap Inc., Walmart and Target. The other was the Accord on Fire and Building Safety in Bangladesh, signed by 220 mainly European companies and trade unions.

The groups set out to inspect all factories that supplied their members’ products, spotting deficiencies, evacuating those with serious structural concerns, and ending their business with the ones that did not comply with needed improvements.

The Accord was a “game-changer” for how it combined transparency, giving workers a voice and enforcing safety requirements, said Aruna Kashyap, senior counsel for the women’s rights division of Human Rights Watch. It made “brands put money behind lip service.”

Brands, including those linked to the garment factories at Rana Plaza — Italian retailer Benetton, and Britain’s Bonmarche and Primark — joined the coalition because “they understood this was a credible way of dealing with the supply chain issue,” said Joris Oldenziel, the Accord’s deputy director for implementation. The companies paid membership fees up to $500,000 per year, depending on the value of apparel they produced from Bangladesh, to fund inspections, remediation and training programs, Oldenziel said. The companies also provided loans to the factories for upgrades or offered to extend their contracts to entice factory owners to make safety changes.

Rana Plaza was a “wakeup call,” he said, that “made it clear the government was not monitoring and enforcing the safety of these factories.” 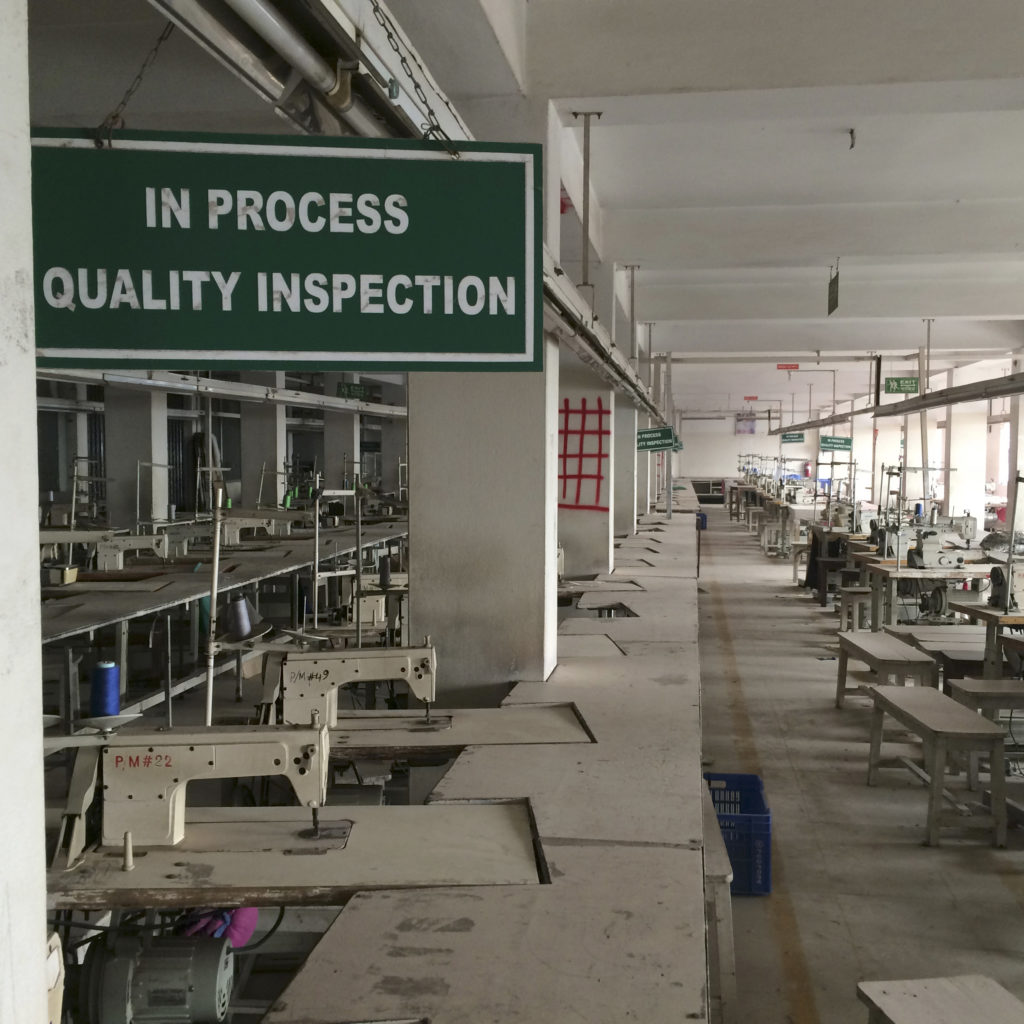 A building safety assessment took place at an Adorn Knitwear garment factory in Dhaka, Bangladesh, on Dec. 9, 2014, near the Rana Plaza collapse. Photo by Krista Mahr/Reuters

Since the collapse, inspections at 1,600 garment factories under the Accord revealed more than 130,000 safety problems, including electrical and structural integrity issues and a lack of safe fire exits, Oldenziel said. So far, 85 percent of those issues have been resolved. Inspectors ordered the temporary evacuation of 50 factories because of serious structural concerns, he added.

As for the U.S. brands, about half of the 666 factories that are part of the Alliance have completed fixes in the five years since Rana Plaza, and the rest have completed about 80 percent of their fixes, said Moriarty, the Alliance’s executive director.

Barrett’s center found in total that about 80 percent to 90 percent of the 2,300 factories between the two groups addressed their deficiencies, from installing sprinkler systems to building stronger buildings.

Another 109 factories that did not cooperate had their contracts terminated, which also meant they could not work with any of the brands who were in the Accord, Oldenziel said. After 18 months, if the factories made required improvements, they became eligible to re-qualify for contracts. 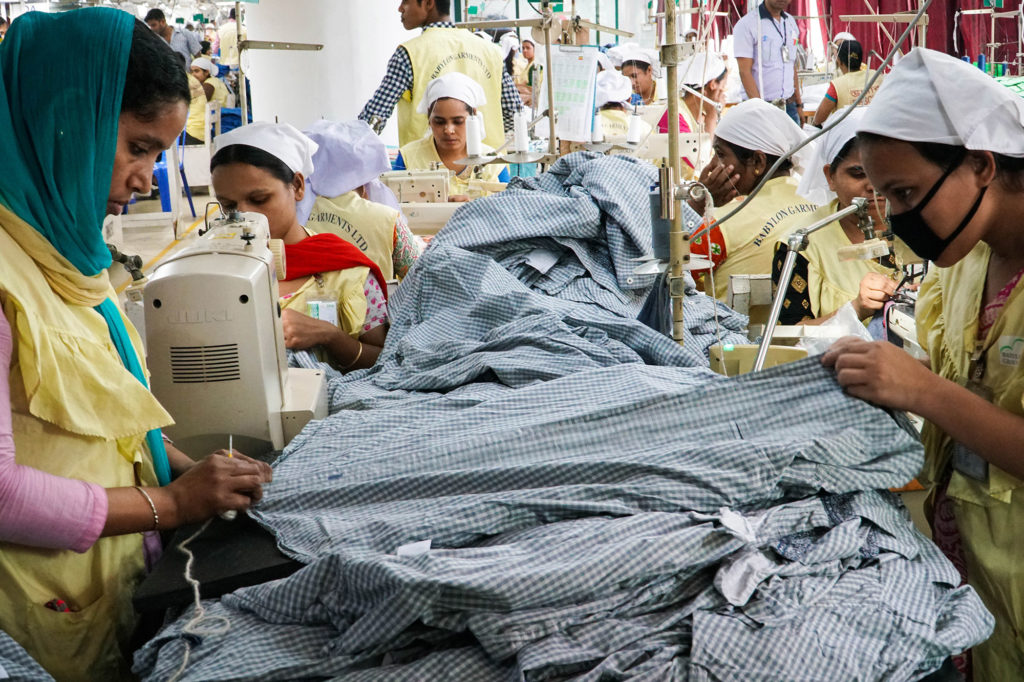 Babylon Group is a factory that has completed the Alliance remediation process and is fully compliant with their standards. Photo by April Gu/NYU Center for Business and Human Rights

Both organizations have started programs to train workers, security guards and safety committees to conduct on-site monitoring. “Once you take a building that’s safe, and you put people in it, people make mistakes,” Moriarty said. “Workers need to be able to identify dangers within the factory” and know what to do in an emergency, such as a fire.

The groups also have set up 24-hour helplines for workers to report inappropriate practices. Moriarty said the Alliance’s helpline has gotten an average of 6,000 calls per month. “The workers trust it. Everybody knows the number — they put it on the back of their ID cards,” he added.

Though the focus is on factory safety, the helplines also help address other worker complaints, such as quality of food or bathrooms, and violence in the workplace, Oldenziel said. 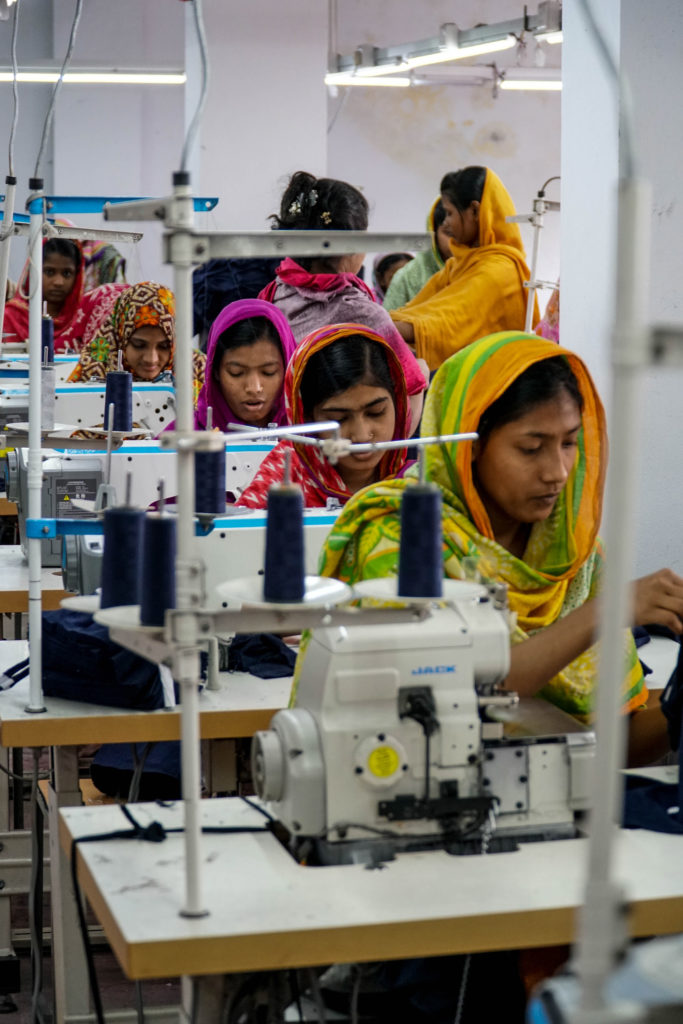 Most garment factory workers are women. Photo of subcontracting factory in Dhaka, Bangladesh, by April Gu/NYU Center for Business and Human Rights

In the last five years, safety has improved at the larger factories that have direct relationships with Western retailers and are under the supervision of two initiatives, Barrett said. But workers at the smaller factories that have domestic contracts and those that are subcontracted – in other words, get the overflow work from other factories – are still in peril, he said.

Those factories are under the responsibility of the Bangladeshi government, which has not done as thorough a job of inspecting or pushing for remediation, Barrett said. “No one has been paying attention to them.”

In the wake of Rana Plaza, the Bangladeshi government merged its fire safety and building assessment efforts, but it still has hundreds of factories to inspect.

Barrett’s center proposes a shared-responsibility task force — including industry, government and other stakeholders — to enforce safety measures at the factories that are flying under the radar. It would be similar to efforts in Detroit, where local businesses, governments and philanthropies joined forces and raised millions of dollars to improve the city, Barrett said.

The cost of that center would be about $1.2 billion – based on the estimated $250,000 it would cost to bring each remaining factory up to the alliances’ safety standards, Barrett said. The participation of many companies, the Bangladesh government and other international organizations like the World Bank would mean that no one entity would bear the cost burden alone, he said.

“The factories have the fear of losing contracts if they don’t respond to the push for safety. If you take that relationship away from the factories, I’m not sure what leverage they would have to drive progress in the factories.”

Oldenziel and Moriarty, however, said retailers do not have an incentive to improve factories that do not supply them, and they wouldn’t have leverage with those factories without contracts anyway.

“The factories have the fear of losing contracts if they don’t respond to the push for safety. If you take that relationship away from the factories, I’m not sure what leverage they would have to drive progress in the factories,” Moriarty said. “Free money is a dangerous thing in Bangladesh. It tends to disappear. So I’m not sure that the concept of giving small factories money is necessarily going to make them a lot safer. It’s something that would need to be worked out and watched closely.”

The Alliance and the Accord were both designed as five-year initiatives. They end in May. However, both organizations plan to continue monitoring and enforcing safety standards after their expiration dates, and brands will have a chance to sign on again.

“We’re going to need to set up an organization that somehow cooperates with the government but is genuinely independent and credible in its operations,” Moriarty said. 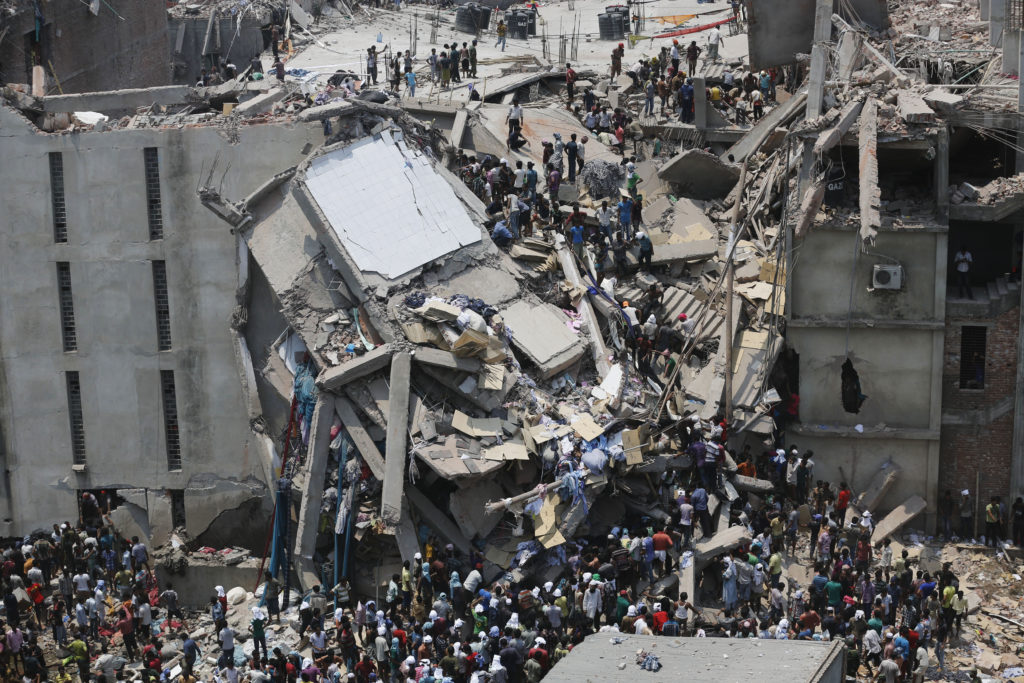 Rana Plaza, an eight-story building housing garment factories and a shopping center, collapsed on the outskirts of the Bangladeshi capital Dhaka on April 24, 2013. Photo by Andrew Biraj/Reuters 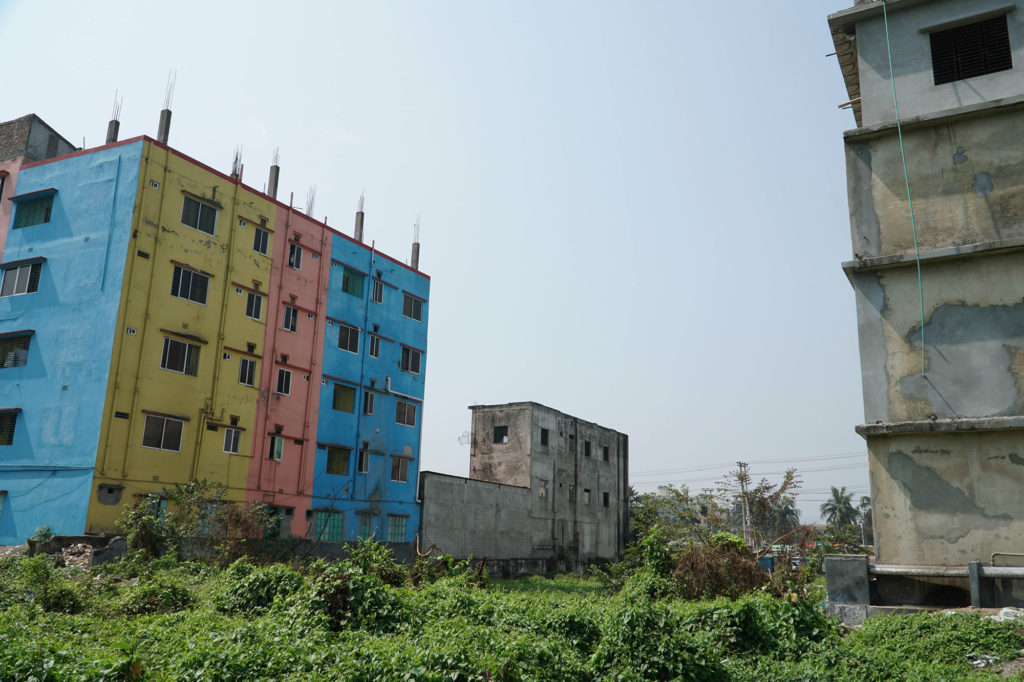 The site of the rubble, where some workers remained trapped for days, is now an empty lot overgrown with vines. All that remains of the building’s previous use are bits of fabric, buttons and discarded clothing labels. Photo by April Gu/NYU Center for Business and Human Rights

The Accord hopes to transition its functions to the Bangladesh government once it proves itself capable of doing everything the Accord did: managing inspections, enforcing safety improvements, providing transparency around factory progress, and offering a complaint mechanism for workers, Oldenziel said. Every six months, the Accord reviews the government’s capacity to take on the duties, and so far has found that it is not ready.

Socially conscious buyers should make their voices heard to have the companies where they buy their clothes continue to apply pressure in Bangladesh to improve conditions, Barrett said.

“It took a disaster as horrendous as Rana Plaza to shake the whole global fashion industry and make the industry realize that … something dramatic had to happen.”

Garment workers earn the equivalent of about $64 per month — “that’s not enough to live on, even in Bangladesh” – and they are exposed to many risks, Barrett continued. “It took a disaster as horrendous as Rana Plaza to shake the whole global fashion industry and make the industry realize that for whatever motivation – whether it was for public relations, or a true humanitarian motivation, or a combination of the two – that something dramatic had to happen.”

Kashyap of Human Rights Watch said in addition to safety enforcement, the Bangladesh government should set up a national insurance plan for injuries on the job, “so all workers across different sectors can at the very least be compensated for loss of life and disabilities, and receive trauma and other care in case of fire and building safety disasters.”

The government also needs to amend its labor laws to bring it in line with international labor rights standards, she noted, and promote greater respect for workers’ freedom of association, such as allowing them to join unions. “It truly is one of the most powerful vehicles for worker empowerment,” she said.

Left: A woman holds a picture of her relative, a garment worker who went missing in the Rana Plaza collapse in Savar, Bangladesh, a year after the accident on April 24, 2014. Photo by Andrew Biraj/Reuters