Mays Kalo missed her younger sister’s wedding in Dubai a few weeks ago. As an asylee in the United States, she does not yet have documentation to travel outside the country. A guest connected her via Skype so she could watch the wedding on her phone. For five hours, she watched the video. “I kept crying the whole day, like what can I do? But there is nothing to do, just hope for a better future.”

Kalo, a mother of two young boys, was born in Homs, Syria. She moved to Saudi Arabia with her family at age 4, and then as an adult to the United Arab Emirates, where she met her husband. They moved to the United States in December 2013. “There is a lot of diversity, especially here in Virginia and D.C., so no one acts like you’re a stranger.” 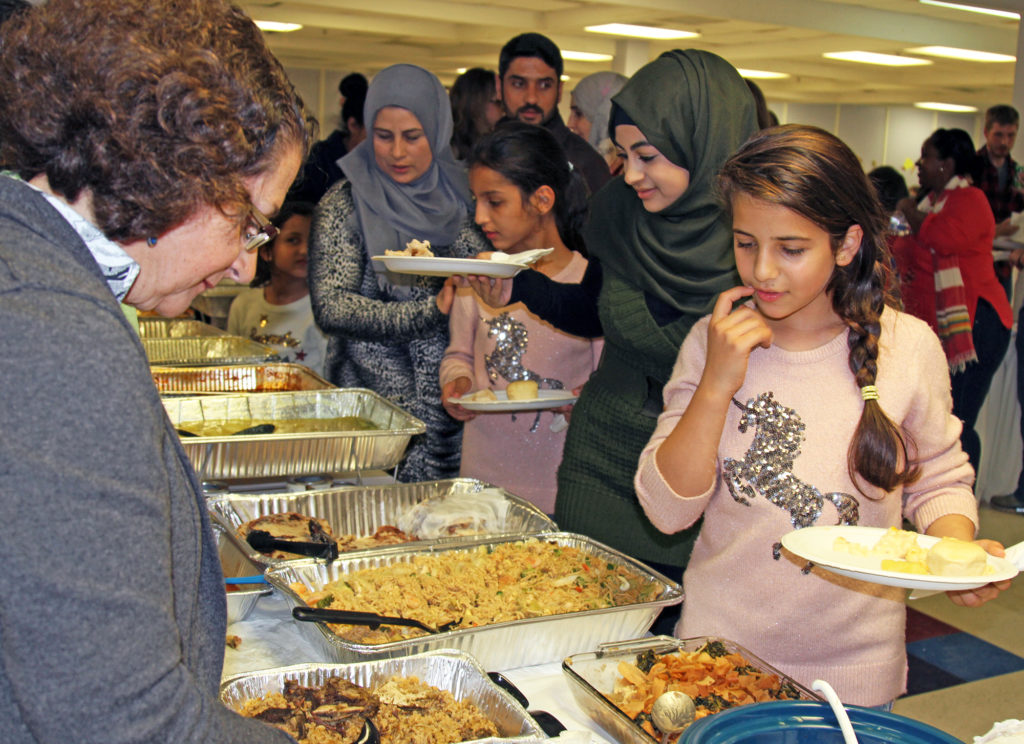 The buffet includes food from Ethiopia, Afghanistan and Syria, along with traditional Thanksgiving dishes. Photo by Larisa Epatko/PBS NewsHour

Her family attended the Refugees’ First Thanksgiving in Arlington, Virginia on Sunday, an event for newly arrived immigrants to share a traditional American meal, potluck-style. They also were encouraged to bring a dish from their homeland, and members of the general public were welcome, too.

“The idea is to introduce the newcomers – to sit together, break bread and talk about what we have in common,” said Sarah Zullo, managing director of the African Community Center. Her organization and the nonprofit refugee resettlement agency, the Ethiopian Community Development Council Inc., sponsor the meal. 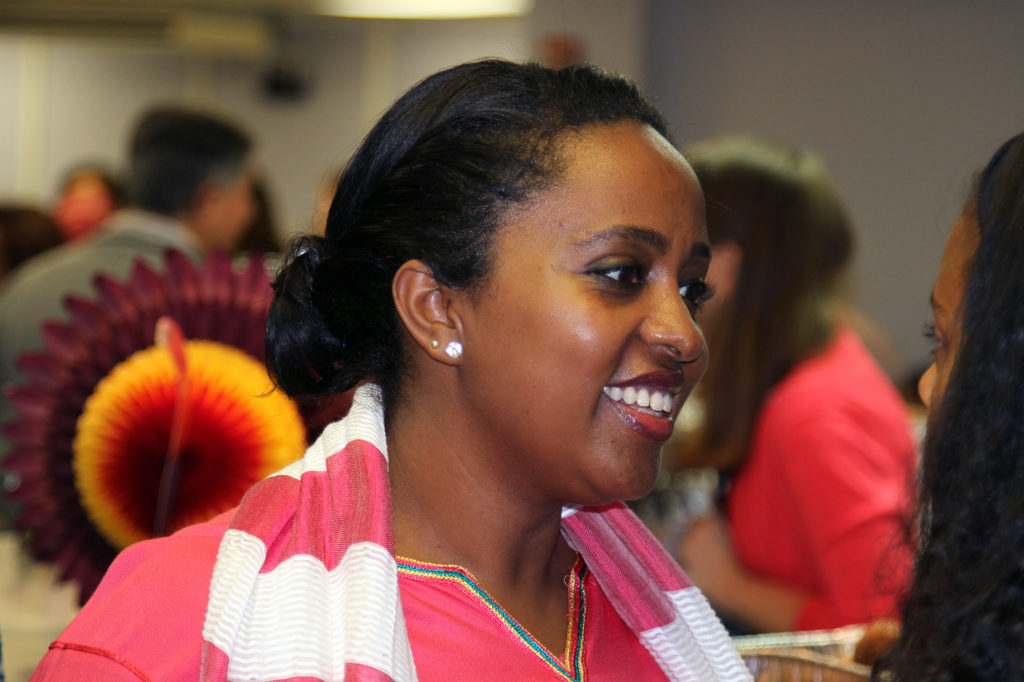 The idea behind the Ethiopian Community Development Council’s event is to “sit together, break bread and talk about what we have in common,” said one of the organizers. Photo by Larisa Epatko/PBS NewsHour

Refugees struggle when they first arrive, Zullo said. “It’s not easy to resettle in a new place when you don’t know the language and you know nothing about the culture.” Formal support services last three months, after which the refugees must learn to be self-sufficient.

At another table, Hameed Haqparwar and his wife Saleha greeted friends as their three children: son Moor, 10, daughter Maryam, 5, and 1-year-old son Wajed took laps around the room.

Haqparwar helped monitor USAID projects in Afghanistan for 10 years until he started getting death threats on the phone for helping Americans. “We never knew who they were,” but he suspected insurgents or other people outside the government were angry about his association with the U.S. government. His extended family members also were getting nervous about their own well-being with him there.

His job enabled him to get a Special Immigrant Visa for his immediate family. After a year and a half of security screenings, fingerprinting and background checks, they arrived in the U.S. in March. 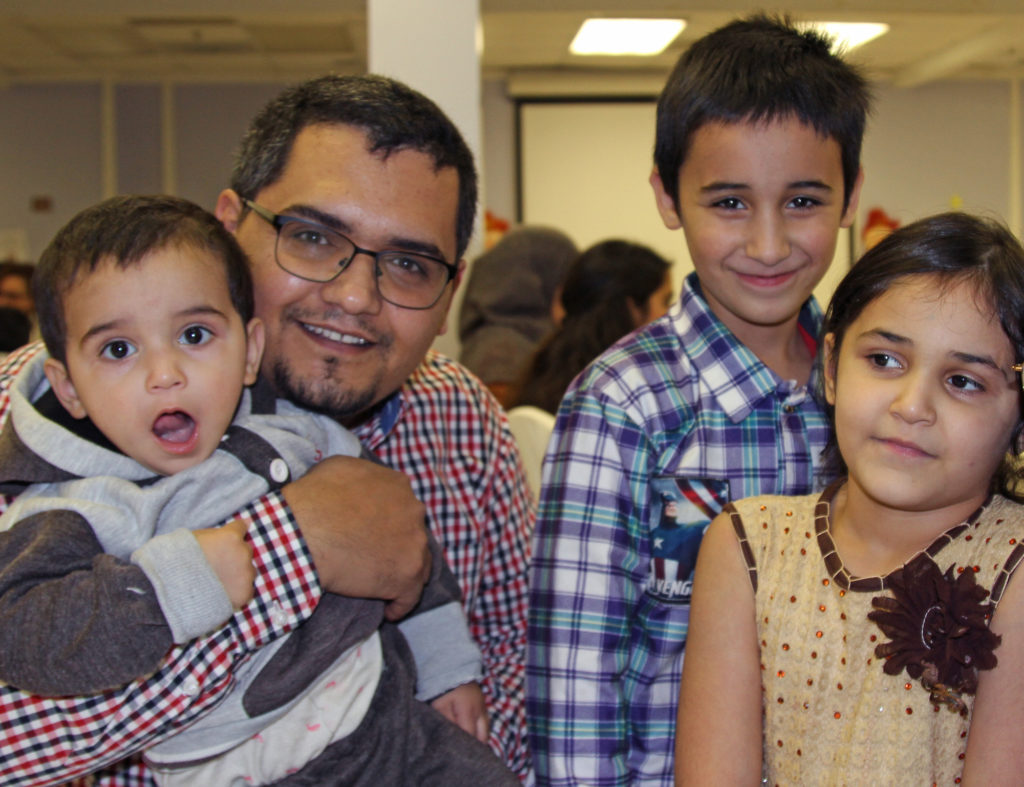 Hameed Haqparwar and his family came from Afghanistan on a Special Immigrant Visa to start a new life in the United States. Photo by Larisa Epatko/PBS NewsHour

Haqparwar said in general, he feels the length of time for the screening was reasonable “to make sure that bad guys would not have the opportunity to come (to the U.S.) among the good guys.”

“Sometimes it could be too long for people who are really in a threatening situation,” he said, but “we were taking our own security precautions” by moving around to different residences while they waited for their visas.

Haqparwar knows English, but his wife, Saleha, is still learning. She said she misses her family terribly, but it was worth coming to the U.S. for the feeling of security. She wants to get her driver’s license and a job as a clothing sales associate one day.

Kalo, the Syrian-born mother, also hopes to land a job as a business analyst after she earns her MBA.

She said when moving to a new country, “You feel like you are just born. You don’t know anything,” but gradually you learn. To the recently arrived refugees, she has this advice: “Be patient. Try your best. Be good with others and be good to yourself.” 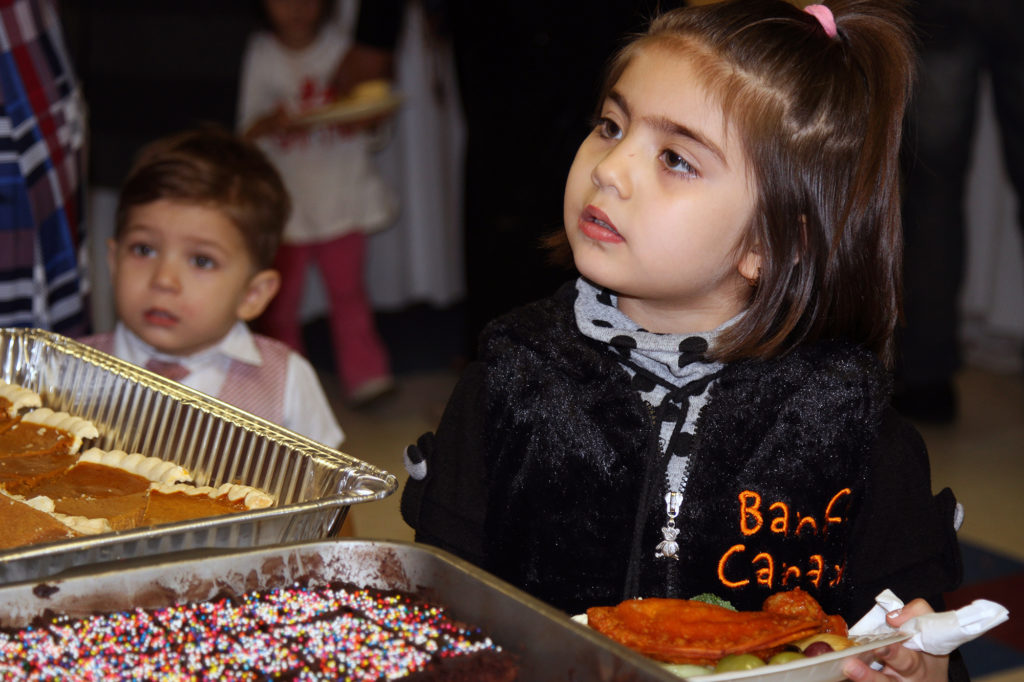 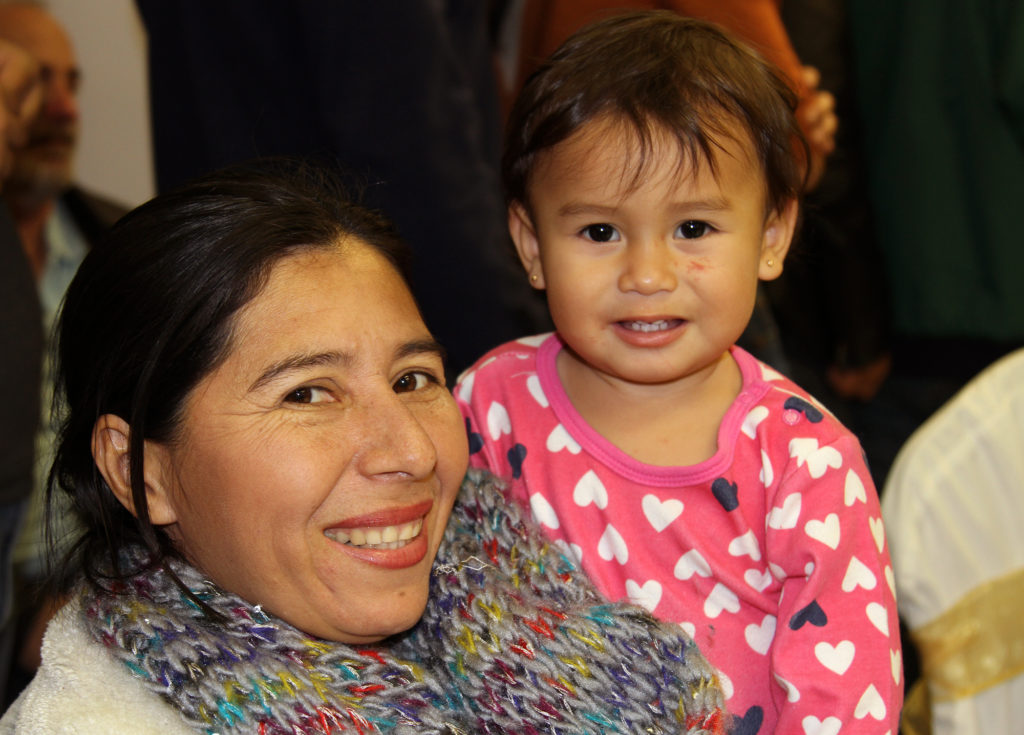 Left: Mays Kalo and her family attend the Refugees’ First Thanksgiving dinner in Arlington, Virginia. Her older son, Farhan, loves soccer, and her younger son, wearing a T-shirt that says “My other shirt is a spacesuit” appears destined for a career in space. Photo by Larisa Epatko/PBS NewsHour