Letters have a special meaning for Helga Kissell. It was through writing letters that she and her husband Leo, an American soldier, fell in love in the aftermath of World War II.

She was working in a photography shop in a Bavarian village, and he was looking for a place to develop prints of the region’s majestic palaces.

Helga and her mother had fled the bombing in Berlin after her father died in the air raids. A relative in Bavaria opened his home to them and planted Helga at the shop’s front counter to deal with the American soldiers, since she knew a few words of English.

“I bluffed my way through,” she recalled recently, speaking with a soft German accent.

“I heard her say, ‘how many prints, please?’ It grew from there,” said Leo from their Colorado Springs, Colorado home.

They first met in October 1945. Leo soon returned to the United States to go to college but continued to send Helga letters and her family care packages of flour, sugar, chocolate bars, and dried milk and eggs.

“Opening it was like manna from heaven,” said Helga. After the war, food was scarce. Helga’s family foraged grass from nearby fields to make soup. They stretched the goodies in those care packages as long as they could.

“When you’re that young, you want to lead an ordinary life. And to be taken away from that overnight was a very frightening experience.” — Helga Kissell

When people from CARE, a nonprofit founded in 1945 that provides disaster relief around the world, found out that Leo had sent care packages through their organization and had a wife who came from Germany, they asked if she would like to write a letter to a Syrian refugee.

Helga, now 87, said “yes” right away. “Being a refugee myself so many years ago, I could instantly sympathize with what it would be like to leave your home behind and be in that position.” 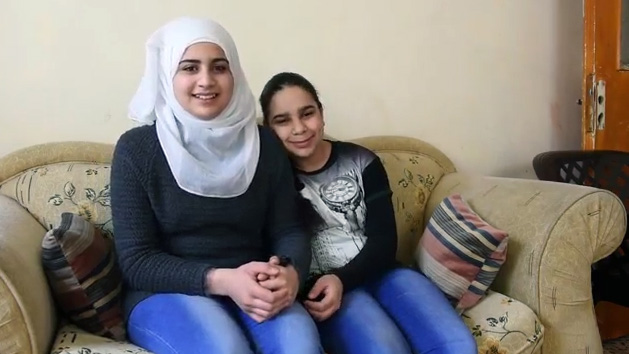 Sajeda, pictured here in Jordan with one of her younger sisters, received a letter and care package from the Kissells in Colorado. Image by Carey Wagner/CARE

Syria’s civil war, which hits the five-year mark on March 15, has been called the worst humanitarian crisis since World War II. So far, 4.8 million Syrians have escaped to neighboring countries and Europe. (See the latest refugee numbers from the United Nations here.)

It’s an overwhelming situation, and human connections help people survive. CARE put five former World War II refugees in touch with five Syrian refugee children living in Jordan as part of a letter-writing program. (You can read all of the letters here.)

Helga was just 16 when she and her mother had to leave Berlin, cram onto a crowded train and enter an unfamiliar place. “When you’re that young, you want to lead an ordinary life. And to be taken away from that overnight was a very frightening experience.”

“It is never easy to have to leave one’s homeland! Always remember the good times and look forward to what the future may bring. It is always difficult to adjust to living in a different country — I know!” — Helga’s letter to 16-year-old Sajeda

Her letter went to Sajeda, also 16, who lives in an apartment in Jordan with her mother, two younger sisters and two younger brothers.

When Sajeda received the letter and it was translated to her, she was filled with emotion and began to cry, according to the nonprofit.

“That would be my reaction if I received a letter,” Helga said. “That somewhere out there in this great big world there’s a person who thinks of me at that time.”

Left: Helga Kissell and her husband Leo met in Germany after World War II and now live in Colorado Springs, Colorado. Helga was one of the WWII refugees taking part in a letter-writing campaign to help Syrian refugees. Image by Carey Wagner/CARE