Maternal deaths down in Afghanistan with help from community workers

One of the bright spots in Save the Children’s 15th annual ranking of the best and worst countries to be a mother, released Monday, is the progress Afghanistan has made in the area of maternal health.

Afghanistan, which spent years in the bottom 10 since the inception of the index in 2000, is now 33 places from the bottom at No. 146, due in large part to its reductions in maternal deaths by almost two-thirds, according to the report. It and a handful of other “fragile” countries — Angola, Eritrea, Timor-Leste and Yemen — are on track to meet the U.N. millennium development goals on maternal health, the report says.

Helping the effort in Afghanistan is an army of unpaid community health workers, who provide a critical link to the formal health system in the country of 31.8 million. 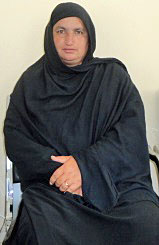 Mahbooba, 37, (pictured at right) who lives in the Pul-e-Charkhi area of Kabul city in eastern Afghanistan, is one of the thousands of volunteers trying to help families in communities throughout the country.

Mahbooba visits about 100 families during her rounds every month, educating them on hygiene and sanitation, breastfeeding babies and nutrition. She also counsels parents on family planning, including spacing out births and the types of contraception that are available. She said another key part of what she does is convincing families to get their children vaccinated.

She recalled visiting one family, a remarried father of seven, whose two daughters-in-law were pregnant, and asking the mothers for their children’s vaccination cards. Mahbooba said she was distressed to learn the children hadn’t received any vaccinations, because their parents didn’t know which ones were needed or where to get them.

She immediately directed them to the local clinic. During a follow-up visit to the family, she found that all of the children, even the newborns, had their vaccination cards. “I am very happy that I was able to change the behavior of this family and its members,” she said.

The local health clinic, run by the nongovernmental organization Muslim Hands, was also where Mahbooba received her training as a health worker and given a standard medical kit to get started. “Whenever I send a referring sheet, the patient does not have to wait for a long time (at the clinic), which gives me authority and respect in the area that I serve,” she added.

Dr. Zakia Maroof, nutrition specialist for UNICEF Afghanistan, said the community health workers are a low-cost asset in a country where there is a “chronic shortage of well-trained, motivated and equitably deployed health workers at all levels.” They are essential in rural areas where health resources are particularly scarce, she said.

Existing medical schools can’t train enough workers to keep up with the increasing demand for health care services, so the community health workers fill in the gap, even providing services from their homes once they are designated as health posts, she said.

According to the Afghan Ministry of Public Health’s Community Based Health Care Department, which trains the “master trainers” who then instruct and supervise the neighborhood health workers, there are a total of 27,831 community health workers: 14,217 male and 13,614 female. In very conservative areas of Afghanistan, only male health workers are allowed to deliver services, Maroof said.

Despite the strides Afghanistan has made, particularly in the area of maternal deaths, it still has a way to go in providing more antenatal — or before-birth — care, skilled attendants at birth and access to emergency obstetric care in case there are any complications during childbirth, according to Maroof.

There has been some talk of compensating the community health workers, who currently work for free, or providing performance-based payments in order to encourage more people to go into the field, she said.

Another challenge in the country where only 43 percent of males and 12.6 percent of females are literate is how to educate the population about nutrition and other health basics when many cannot read. That’s part of what makes the home visits by the health workers so necessary, said Mahbooba in Kabul.

She said she has encountered many mothers who didn’t understand they needed to eat a variety of food including fruits and vegetables during pregnancy or how to take care of their personal hygiene. “Because the majority of the women are illiterate here, if community health workers were not there, these families would have faced a lot of problems related to mother and child health.”

Left: An Afghan woman carries her child in Herat on Aug. 14, 2013. Photo by Aref Karimi/AFP/Getty Images