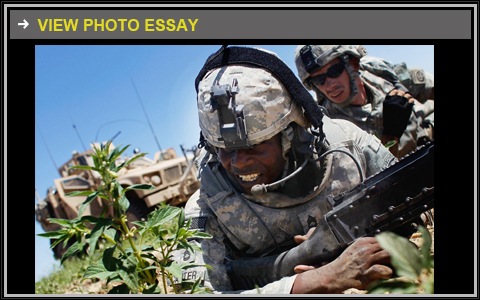 The war in Afghanistan, sparked by the Sept. 11, 2001 terrorist attacks on the United States, has continued for nearly 10 years. Elements of the Taliban regime — though toppled — have continued to fight against international forces, which are working to turn over security of the country to Afghan hands.

We dipped into the NewsHour’s archives to find 10 stories representing each year of the war:

2001
After a U.S.-led invasion, the capital Kabul falls on Nov. 13 to the anti-Taliban coalition known as the Northern Alliance. Ray Suarez explores what comes next for Afghan citizens with a panel of regional analysts.

2002
The Afghan loya jirga, or “grand council”, elects Hamid Karzai as interim leader in June. The interim government has until 2004 to organize elections.

2003
With violence increasing, NATO takes over security in Kabul in August.

2004
More than 10.5 million Afghans register to vote in the fall for 18 presidential candidates, including Karzai, who wins with 55 percent of the vote. In December, he is inaugurated.

2005
In September, Afghanistan holds its first parliamentary elections in more than 30 years in a largely peaceful vote. But by November, suicide bombings and other forms of attacks have doubled in Afghanistan.

2007
In February, a suicide bomber strikes the entrance to a U.S. military base in Bagram during a visit by Vice President Dick Cheney, killing 23 people. Clashes between NATO and Taliban forces continue. The NewsHour looks into how the drug trade is complicating the country’s stability.

2008
Seven years into the war, U.S. and allied forces are still battling Taliban insurgents. Ray Suarez looks at the honoring of 10 Army Green Berets who fought an insurgent stronghold for nearly seven hours in the mountains of Afghanistan.

2009
The Obama administration orders 17,000 more troops to Afghanistan — and later in the year, 30,000 more — and names Richard Holbrooke special envoy to Afghanistan and Pakistan. In an interview with Margaret Warner, President Hamid Karzai says the additional troops come “seven years too late.”

2010
Tom Bearden gets the perspective of troops preparing to deploy to Afghanistan at Fort Carson Army base near Colorado Springs.