A convoy of 44 trucks traveled on Monday to three Syrian towns, where desperate residents were eating leaves to survive, under a temporary agreement made with rebels and the Syrian government.

The trucks from the Syrian Red Crescent, Red Cross and U.N. agencies delivered enough food for 40,000 people for a month, along with medical supplies and blankets, to Madaya, near the Lebanese border, and two villages Foua and Kefraya in northwestern Syria.

“The first impression is really heartbreaking,” said Pawel Krzysiek, spokesman for the International Committee for the Red Cross in Syria who was traveling with the convoy, quoted the Guardian. “You see a lot of people on the street, some of them smiling and waving to us, but many just simply too weak with a very, very bleak expression, very tired.” 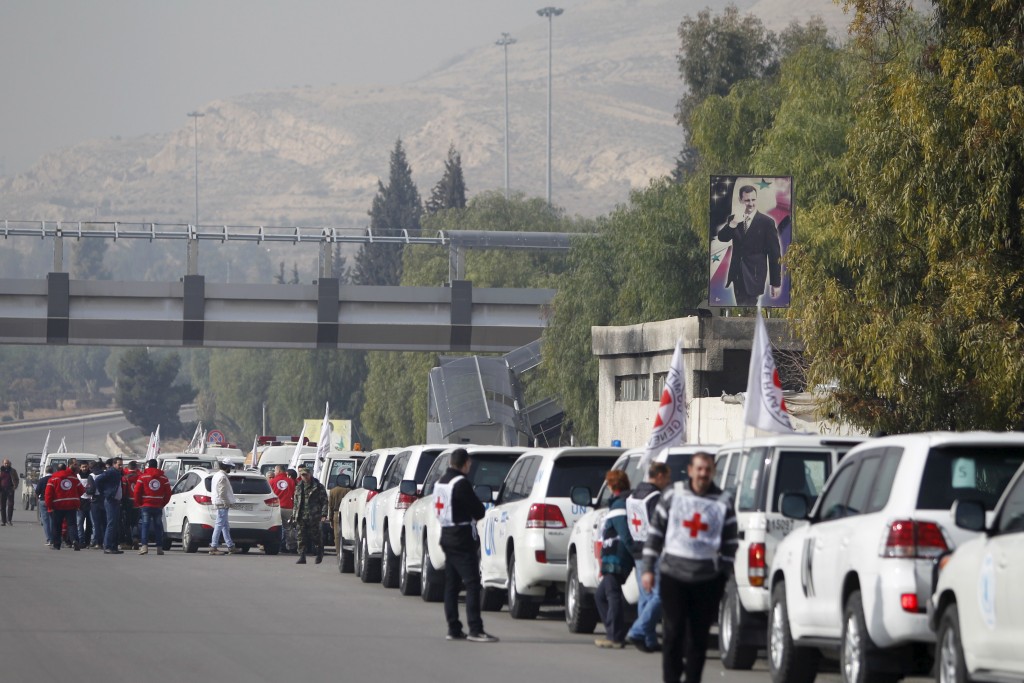 A convoy consisting of Red Cross, Red Crescent and United Nations agencies gathers in Damascus, Syria, before heading to Madaya, near the Lebanese border, and two villages Foua and Kefraya in the northwest of Syria on Jan. 11. Thousands are trapped in the besieged Syrian towns, and the United Nations says people are reported to have died of starvation. Photo by Omar Sanadiki/Reuters

The rebel-held town of Madaya has been surrounded by a government blockade since summer, and the United Nations has reported that people inside are starving. Residents are similarly stuck in Foua and Kefraya, which rebel groups have blockaded since March.

The convoy was able to enter Madaya and the two villages in the northern province of Idlib under an agreement with the rebels and President Bashar al-Assad’s regime. Blockades are a common tactic used by both sides in the nearly five-year-long civil war.

The United Nations said only 10 percent of requests to deliver humanitarian supplies to these and other tightly controlled areas of Syria were approved over the past year.

Left: A toddler is held up to the camera in this still image taken from video said to be shot in Madaya on Jan. 5. Warnings of widespread starvation are growing as pro-government forces besiege an opposition-held town in Syria. Handout via Social Media Website from Reuters