Of the dozens of Syrian refugees that human rights advocate Sahr Muhammedally met last spring, one woman stood out. Her husband was killed in civil war fighting and her daughter, after getting caught in an explosion, became paralyzed from the waist down. But the woman told her, “I’m ready to forgive as long as I can go back to my home and live the way we used to.”

“People still have faith and are ready to forgive,” despite the horrific tragedies many have experienced, said Muhammedally, a senior legal adviser at the Center for Civilians in Conflict, based in Washington, D.C.

The Syrians she encountered, either holed up in the northern part of the country or now living across the border in Turkey to escape the relentless fighting, also expressed frustration with the international community for letting the conflict go on for so long. The civil war between the Syrian government and rebel forces is approaching its third anniversary on March 15.

“The explanation used to be that there are challenges at the U.N. Security Council level, and security forces can only operate under legal definitions,” Muhammedally said. But all of that “doesn’t make sense to people who are under siege.”

Some progress has been made at the international level. On Feb. 22, the U.N. Security Council was able to set aside its members’ differences about how to settle the longstanding conflict, and approved a binding resolution that spells out how humanitarian aid has to be provided and identifies besieged Syrian cities where aid must go. “Unlike other resolutions, this one is more robust,” said Muhammedally. “The challenge is implementation.”

Muhannad Hadi, the U.N. World Food Program’s regional emergency coordinator for Syria and neighboring countries, agreed with a list of aid organizations that endorsed the resolution as a good first step. But he said even more has to be done.

“We need to have access everywhere. Having ad hoc access does not solve the problem,” Hadi said. He emphasized that both sides, the government and opposition, have to adhere to ceasefires so civilian food distributors can do their work. 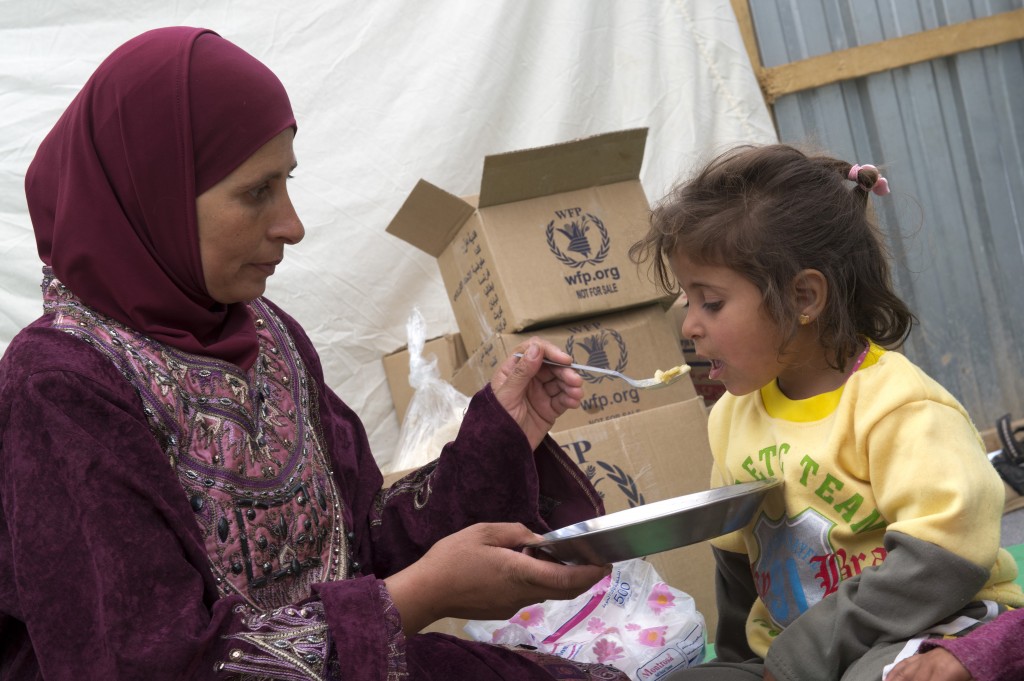 In this April 16, 2013, file photo, a mother feeds her child at the Zaatari refugee camp in Jordan, one of the countries where Syrians have fled due to the civil war. Photo by Rein Skullerud/U.N. World Food Program

Distribution of aid to Syria is a massive project. More than 2.5 million Syrian refugees are now camped out in neighboring countries, and an estimated 6 million people are displaced within Syria. It costs the WFP $40 million a week to distribute food to those in need, said Hadi.

Currently, relief supplies follow the same general route. They are brought in from Lebanon and Jordan to food packaging facilities in Syria’s capital Damascus. Rations are packaged for a family of five and typically include rice, oil, pasta, sugar, salt, tomato paste, bulgur wheat and sometimes wheat flour so the families can make bread. The WFP works with local partner organizations to distribute the supplies.

“Each month we have almost 3,000 trucks moving from one place to the other, crossing (battle) lines,” said Hadi. But in some areas, the fighting is too intense, and the workers can’t reach hundreds of thousands of people in dire need, he said.

The WFP assesses whether its workers’ lives and those of the recipients would be in danger if they tried to deliver the aid, he explained. “The point is we can’t lose a life to save a life.”

Nancy Lindborg, who is in charge of conflict and humanitarian assistance at the U.S. Agency for International Development, described on the Feb. 27 PBS NewsHour how one of its partners had lost 42 staff members since the conflict began. “The courage of the humanitarian workers, who every day are risking their lives to deliver assistance, is really remarkable,” she said.

In the past few weeks, access to certain areas has improved somewhat. The WFP was able to go to parts of Deir-Ezzor in eastern Syria and Idlib in the northwest for the first time in months, noted Hadi.

But sometimes food trucks randomly are turned away at checkpoints by either the government or opposition — whichever is in control, he said. For example, between Damascus in the South and Aleppo in the North, there are 30 to 40 checkpoints. Some guards allow the trucks to pass easily, others harass the drivers and some even tell them to turn back. In those cases, there is nothing to do but leave and try again the next day, Hadi said.

Adding to the trouble, in northeastern Syria, armed militants who are seeking to turn Syria into a strict Islamic state refuse to let aid go through. The WFP has had to airlift supplies from northern Iraq — an expensive process — to reach those cut-off areas, said Hadi.

That’s why implementation and monitoring are so important, both he and Muhammedally said.

The U.N. resolution calls for progress reports to be sent back to the United Nations every 30 days. The first would be at the end of March.

The question is if the report shows no progress, what will the U.N. Security Council do, said Muhammedally. “They didn’t include the consequences for inaction in the resolution, but at least everyone’s been put on notice.”

Left: A Syrian refugee family from Aleppo seek shelter during a rainy day on March 8, 2014, in the Uskudar district of Istanbul, Turkey. Photo by Bulent Kilic/AFP/Getty Images