The al-Qaida-affiliated militant group al-Shabab is trying to improve its reputation by delivering food to parts of Somalia that are suffering from drought.

Al-Shabab blocked food aid and killed some humanitarian workers during the last major famine in 2011, severely damaging its image. So this time, the group is taking a softer approach, claiming to have distributed food in the six central and southern regions of Bay, Bakol, Mudug, Hiraan, Lower Shabelle and Galguduug.

“This is a resilient group. They do learn their lessons,” said J. Peter Pham, vice president for Research and Regional Initiatives and director of the Africa Center at the Atlantic Council. The militants learned that part of their military defeat was due to the improved training of peacekeepers, but also their own handling of the 2011 famine, he said.

Al-Shabab has taken over parts of southern and central Somalia in order to establish a fundamentalist Islamic state, and has claimed responsibility for numerous attacks around the country. 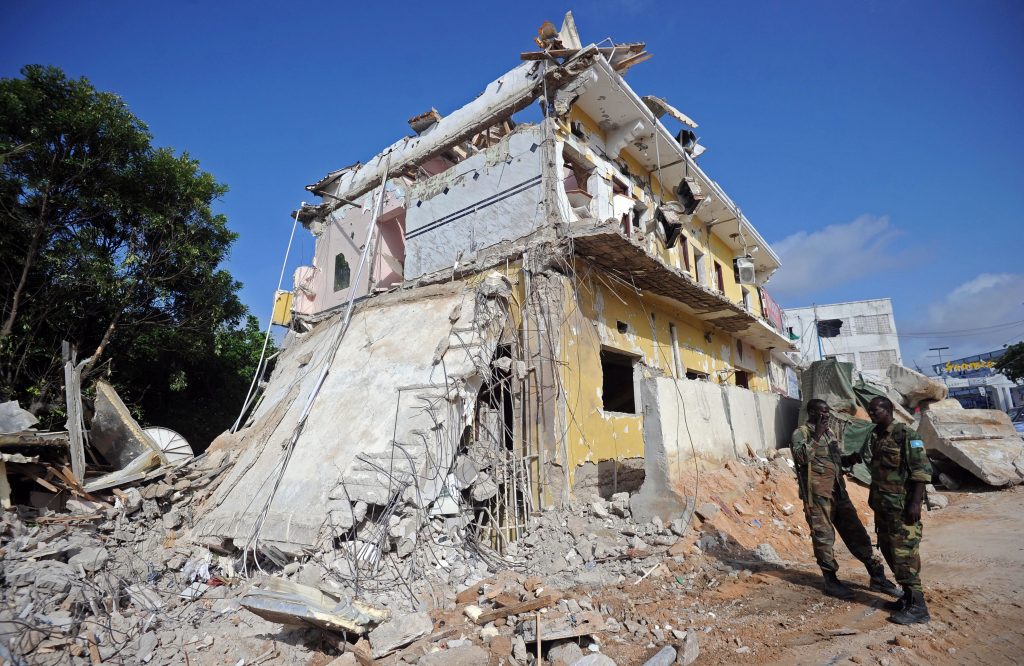 Somali soldiers stand guard on June 26, 2016 at the scene of the terror attack on a hotel in Mogadishu that killed at least 11 people the previous day and was claimed by al-Shabab militants. Photo by Mohamed Abdiwahab/AFP/Getty Images

The new government under President Mohamed Abdullahi Mohamed cannot enter al-Shabab territory for safety reasons, and they are loathe to engage the terrorist group directly when trying to deliver aid.

Otherwise, the Somali government would appear complicit, such as using al-Shabab-friendly contractors, or risk accusations of diverting international aid to the militants, said Pham.

“It underscores the resilience and adaptability of the terrorist group and underscores the weakness of the internationally backed government that al-Shabab is out there under its own banner distributing aid,” he said. “Progress clearly has been made (under the new government), but still there’s a long way to go.”

Reena Ghelani, deputy director for the Coordination and Response Division at the U.N. Office for the Coordination of Humanitarian Affairs (OCHA), told reporters on a conference call Thursday that al-Shabab is taking advantage of people’s suffering and it makes access to all areas by the international community even more crucial. “It’s important people have access to aid to avoid this exploitation,” she said.

President Mohamed, who took office in February, formed a National Drought Response Committee to collect donations from the Somali diaspora and distribute aid. U.N. Secretary-General Antonio Guterres has called for $5.6 billion in international aid for the four countries. 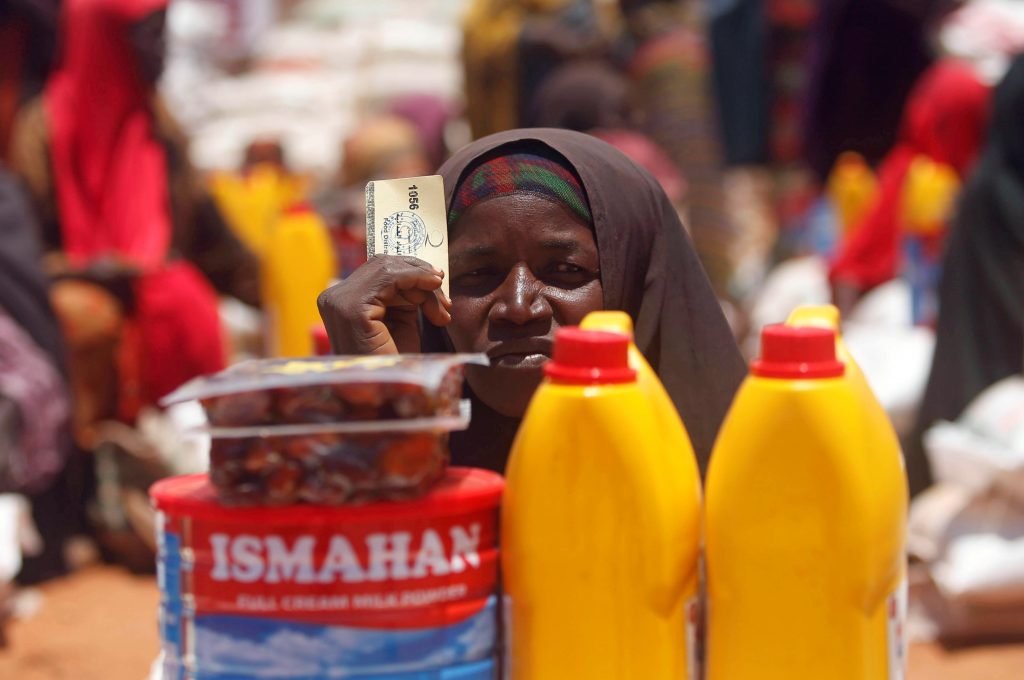 An internally displaced Somali woman receives basic food supplies at a distribution center organized by a Qatar charity in Baidoa on April 9. Photo by Feisal Omar/Reuters

Upwards of 20 million people are facing starvation and famine in Yemen, South Sudan, Somalia and northeastern Nigeria, according to U.N. estimates.

A famine is declared when 20 percent of the population is starving and 30 percent of children under 5 are suffering from malnutrition, Arif Husain, chief economist at the World Food Program, told reporters. Aid groups hope that sounding the alarm earlier than in 2011 will prevent thousands of deaths.

“We’re better funded now” than in 2011, thanks to the earlier call to action, said Husain. However, even if the current rainy season produces more rain than in past drought years, people still need food assistance to get them to the next harvest, he said.

Left: A Somali family lives in a makeshift shelter after fleeing from drought-stricken regions, in Baidoa, west of the capital Mogadishu. Photo by Feisal Omar/Reuters