Alleged 9/11 Plotters Have Another Day in Guantanamo Court 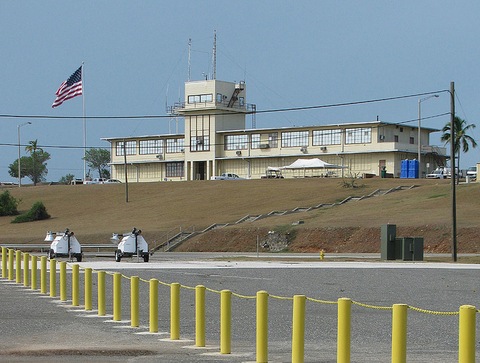 The courthouse used for detainees at the U.S. base in Guantanamo Bay, Cuba, is an old airport terminal. Photo by Larisa Epatko.

Khalid Sheikh Mohammed, identified in the 9/11 Commission Report as the “principal architect of the 9/11 attacks,” is slated to appear in court with four suspected co-conspirators on Monday.

The hearing is scheduled to start June 17 and could last throughout the week. It is on a series of pretrial motions, including motions to dismiss the charges because of problems with the Military Commission Act of 2009.

Mohammed, who grew up in Kuwait, allegedly presented the al-Qaida leadership with the plan to hijack several airliners and fly them into targets. He was arrested in Pakistan in March 2003.

Four other men are charged:

– Waleed bin Attash, a Yemeni, allegedly ran a training camp in Afghanistan where two of the 9/11 hijackers went.

The five suspects are being tried at Guantanamo Bay in a war crimes tribunal known as a military commission. The charges against them include murder and terrorism, and they could get the death penalty if convicted.

The five appeared in court in May 2012 at their arraignment, which was repeatedly interrupted as they complained of torture and prayed during unauthorized times.

We’ll be live-blogging the hearing — which will be broadcast at Fort Meade via closed-circuit TV feeds from Guantanamo — here and on Twitter.