Man with a Mission: Anna Hazare’s Anti-corruption Campaign in India 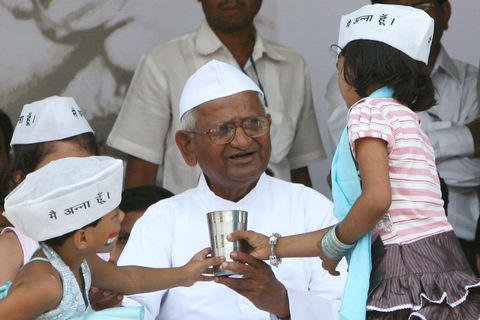 Long ago, an activist from a small village in western India went on hunger strikes to improve his community. Now, at age 74, he is hoping to bring about change on a national scale by pressuring the government to adopt anti-corruption laws.

His tactics haven’t changed: Anna Hazare, a farmer and former soldier, still goes on fasts and is getting international attention for his efforts. Modeling himself after India’s famous founding father Mahatma Gandhi, he also employs civil disobedience and non-violent street protests to advance his message.

“Today if we don’t take care, then what will be our future? … Together we have to fight this struggle until the country is free of corruption,” he recently told a group of supporters in Ralegan Siddhi.

Jon Sawyer, director of the Pulitzer Center on Crisis Reporting, and his wife, author Kem Knapp Sawyer, recently visited Hazare’s hometown of Ralegan Siddhi to learn more about the man, who has his share of supporters and detractors.

They interviewed Ananya Vajpeyi, a teacher of South Asian history at the University of Massachusetts in Boston and a fellow at the Center for the Study of Developing Societies in New Delhi, about Hazare’s work and the history of the anti-corruption movement:

The duo also looks into the sanitation challenges in India and the range of products its residents produce — from black soap to decorated textiles — to make a living.

View the full series on the Pulitzer Center’s website.

The NewsHour plans to air a report on Anna Hazare early next year.