You asked: How are refugees vetted today?

When President Donald Trump signed an executive order last month suspending the U.S. refugee program in order to implement more “extreme vetting,” there were many questions not only about his proposal but also about how our current system for vetting refugees works.

A federal court put a stop to the order last month. Mr. Trump said at a press conference Thursday that he planned to release a new version this week, based on the court’s ruling.

As we’ve covered the immigration ban and the debate around it, PBS NewsHour viewers have asked: How long does refugee processing take now? What kinds of checks and interviews take place? How did President Trump’s order aim to change that?

We took your questions to Sarah Krause, senior director for programs at the Church World Service’s Immigration and Refugee Program, to create a quick guide to the U.S. refugee vetting process as it stands.

Refugees are those forced to flee their home country due to a fear of persecution based on:

They must have crossed a border from their home country to another country to be considered a refugee. In the second country, they can file for protection with the U.N. refugee agency, known as the U.N. High Commissioner for Refugees.

UNHCR determines whether to return refugees to their home country if it’s safe; keep them in the country in which they’ve sought refuge; or resettle them in a third country, like the U.S.

For the third option, the U.N. refugee agency, along with the U.S. Embassy or a nongovernmental organization, can refer the refugee to the U.S. to start the application process. The case goes to one of nine Resettlement Support Centers stationed in different regions around the world. 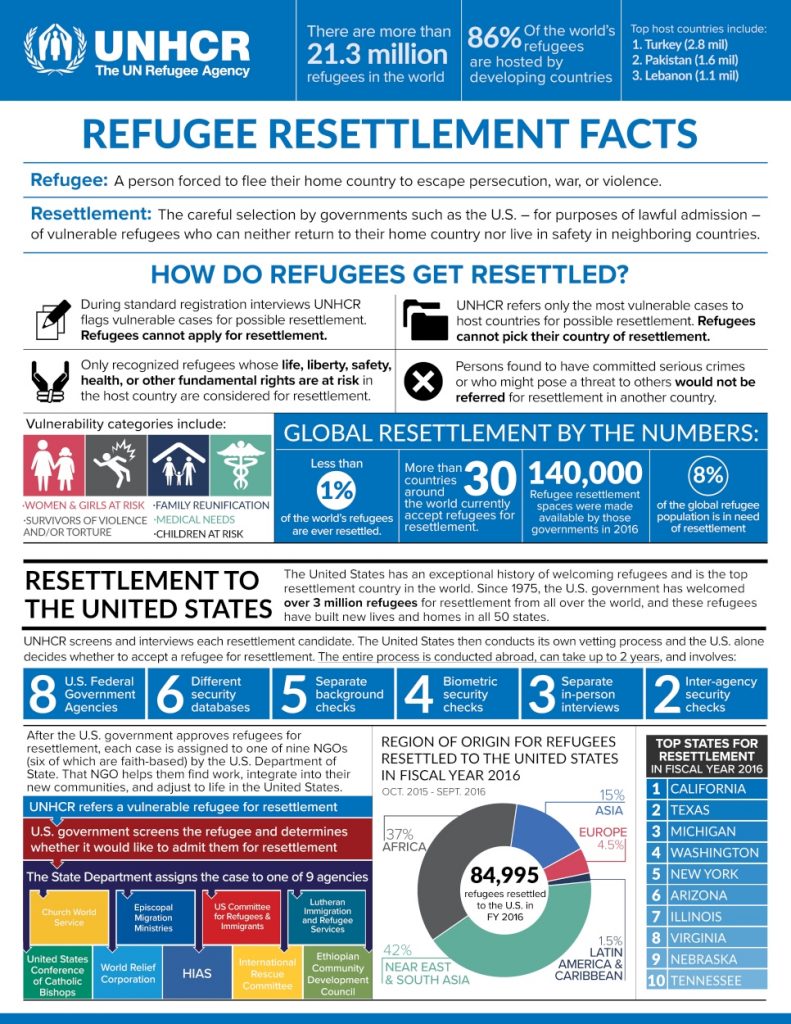 Who does the security screening and where does it take place?

Staff members at Resettlement Support Centers travel to where applicants are staying to conduct face-to-face interviews, cross-reference their personal information and enter the data into the State Department’s Refugee Admission Processing System.

Officers from the Department of Homeland Security’s U.S. Citizenship and Immigration Services review the information, interview the applicants again and take their fingerprints.

U.S. agencies, including the National Counterterrorism Center, FBI, Department of Homeland Security, Department of Defense, and Department of State, along with the intelligence community, conduct security checks including running the fingerprints through:

The security checks can expire if the overall vetting process takes too long. Any expired steps must be repeated if the applicant is still being vetted, Krause said.

The agencies are looking for potential security threats, including “connections to known bad actors, and past immigration or criminal violations,” according to the State Department’s website.

For refugees from Syria, DHS conducts additional reviews and collects additional biometric data, including iris scans, according to the department’s U.S. Committee for Refugees and Immigrants.

The average length of time to process a refugee is 18-24 months, but it can take longer depending on the person’s nationality or their location. For example, people in certain refugee camps are more difficult to reach, and the rainy season in Africa may cause delays, Krause said.

Once the refugees clear security and are approved to enter the U.S., they undergo health screenings by the Department of Health and Human Services to make sure they do not have contagious diseases such as tuberculosis. If they do, they are treated and then undergo the health screening again.

The International Organization for Migration handles their travel logistics.

When refugees enter the United States, resettlement offices around the U.S. help them locate housing and jobs. The Pew Research Center tracked where the refugees came from by region since 1975: 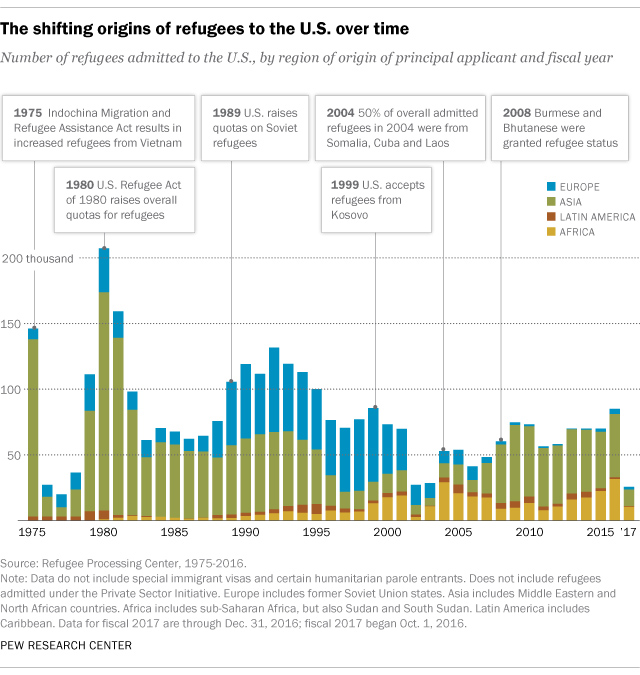 Did people in charge of vetting get laid off under the new administration? What happens to the investigations that were already underway?

The executive order set a 50,000 cap on the total number of refugees allowed in the United States. If that ceiling remains in the rewritten order, the Resettlement Support Centers — along with other agencies that partner with the State Department to conduct the vetting — will face layoffs due to the decrease in refugee arrivals, said Krause.

So far this fiscal year, more than 30,000 refugees have arrived in the U.S.

The investigations already underway will continue. Whether the Resettlement Support Centers can take on any new cases depends on the regional targets set by the Presidential Determination, Krause said.

Left: The al-Qassabs, Iraqi Christians from Mosul, prepare to board a flight out of Beirut to the United States. Their father was denied entry twice. (Read their story.) Photo by Rebecca Cook/Reuters