At a school for poor children in India, price of attendance is paying it forward

Shanti Bhavan, a boarding school in Tamil Nadu in southern India, has provided free education to the poor for 20 years, in exchange for a sense of duty and service to the community once graduates are out in the real world.

The original school started with 48 children and now, two decades later, has 300 in the program, including about 50 in college with scholarships. Another 50 graduates are working, and sometimes they return to pitch in with teaching or to catch up with other alumni. A new, four-part Netflix documentary about the school premieres today. Called “Daughters of Destiny,” the series spans seven years and follows the lives of five female students. (You can watch the trailer below.)

Shilpa Raj was one of the first girls admitted, at age 4. In her classes, Raj favored English and story time over physics and math. “My teachers saw I was interested in reading, writing and telling stories, and encouraged me to pursue my passion for writing.”

She aspired to be a journalist, but her life took an unexpected turn when her 14-year-old sister, Kavya, who had run away from home, died by suicide. Raj felt intense guilt for not helping her sister and having more advantages than she had had, and decided to pursue a career in counseling others. 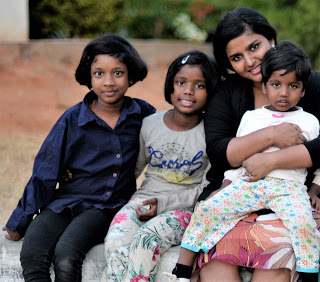 Shilpa Raj, now 24, is a Shanti Bhavan graduate who works as a counselor. Photo courtesy of Raj

“I realized that my entire community had a lot of mental health issues,” she said recently in an interview. “I was trying to understand why my family behaved the way they did. My parents always fought and threatened to commit suicide. There were underlying psychological problems as a result of the hard lives they were leading.”

Shanti Bhavan focuses on children from disadvantaged homes, with family struggles like alcoholism, debt and poverty, said Ajit George, director of operations. His father, Abraham George, founded the school in 1997 and serves as its principal.

The in-house education covers preschool through high school, and the organization continues to help pay for the students’ college education.

The students are held to a high standard, regardless of their background, said Ajit George. In society, people sometimes think it’s OK to scrimp on what’s provided to the poor because they have so little already, he said. “I think that’s just our own internalized prejudice towards people in poverty. Shanti Bhavan has a totally different ethos about it. Our opinion is there should be no double standards for the poor. The poor deserve as much as anyone else, and if you can provide them that same level of opportunity, they will do well and they will excel.”

Along with demanding academics, the students get life skills training. The girls learn about menstrual cycles, the boys are taught about gender equality, and all practice job interviews.

About 600 volunteers from around the world assist the teachers in their area of professional expertise, help run extracurricular activities and act as mentors.

The school is funded by corporations, nongovernmental organizations and private donors. Construction of a second school is planned also in southern India, a few hours’ drive from the original site, to save costs and share resources, said George.

Another graduate, Prasanth Kumar Reddy, 22, was raised by a single mother after his alcoholic father left the family. Reddy had a love of science in school, but became intrigued by the stock market and now works for Goldman Sachs in Bangalore.

“When I go back home, it reminds me of my past and the difficulties that my mother faced after my father left us,” he said. The monthly visits and daily calls with his mother are a motivation to help improve her life and others’, while he’s living in relative comfort in the city. 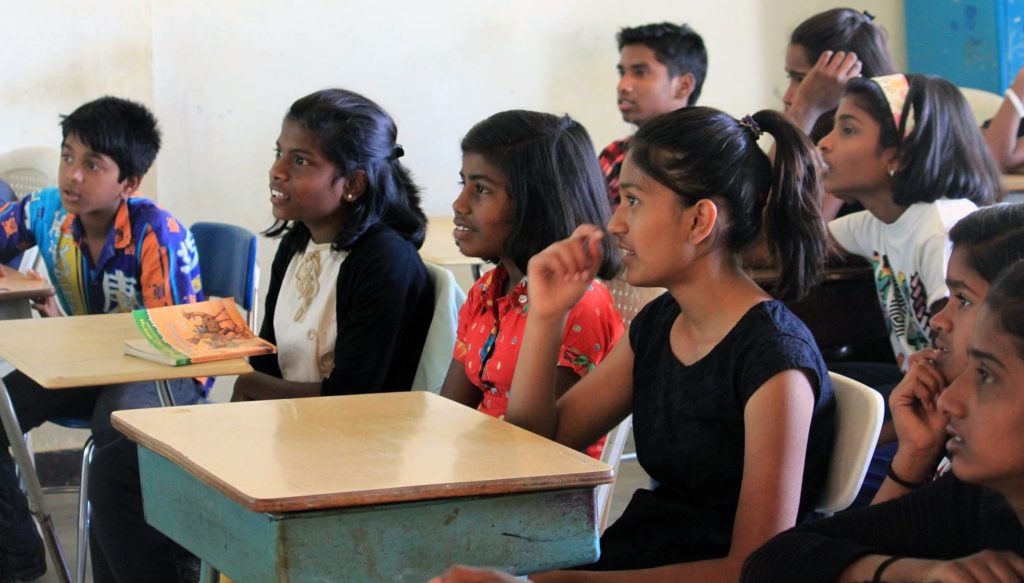 In India as a whole, it seems that a culture of giving back to society is growing, said Reddy, such as corporations pairing with nongovernmental organizations for their employees to do volunteer work. “It might be for their own gain, maybe tax gain, but at least that’s driven people to start something.”

Reddy said he’s excited about the prospect of Shanti Bhavan opening a second school to foster those positive changes in society.

Many of the students, like Reddy and Raj, realize they have a unique opportunity at Shanti Bhavan and it’s up to them where they go from there, said George. “It’s given them a strong sense of responsibility” to help other members in their family who didn’t get the same chance. They help their siblings find jobs, and use their salaries to repay their families’ debts and get better housing, he said.

Shilpa Raj, now 24, counsels families of children with autism and other developmental disorders in her home state of Karnataka in southwestern India. She recently completed a master’s degree in psychology and plans to pursue her doctorate. She wants to start a program that caters particularly to the needs of troubled girls.

Like her sister, the girls might be reaching out and feel that no one is hearing them, said Raj. “She reached a point in her life when she felt there was no hope, and I never want anyone, a child or adult, to go through that again.”

The documentary series “Daughters of Destiny” features five students in the rural school.

Left: The documentary "Daughters of Destiny" tracks the lives of five girls at Shanti Bhavan, a school for the poor in India. Screen image courtesy of Netflix