After Bergdahl’s release, what about other U.S. citizens held overseas?

When Alisa Weinstein and her family heard about the release of Sgt. Bowe Bergdahl, who had been held by Taliban militants in Pakistan for five years, like many others they were relieved and thrilled for his family.

“My first reaction was, that’s amazing. And then the second moment was: What does that mean for us?” she said. “And also just extreme disappointment that my father was not freed with him.”

Her father, Warren Weinstein, was kidnapped in August 2011 from the compound where he lived and worked in Lahore, Pakistan. The kidnappers got past the compound’s guards by posing as local residents bringing him food to celebrate Ramadan. Members of al-Qaida later released an audio recording saying they had him.

During the time he was in Lahore, Weinstein was Pakistan country director for the development consulting firm J.E. Austin Associates Inc., based in Arlington, Virginia. Weinstein had been in Pakistan since 2004. He was kidnapped just four days before he had been scheduled to leave, now nearly three years ago.

When a member of the U.S. military is injured, captured or killed, the policy is straightforward: get them back; leave no person behind.

When it’s a civilian, however, the policy is less clear. In Weinstein’s case, the Obama administration said it wouldn’t negotiate with his al-Qaida captors but would continue efforts to free him.

In December, Weinstein’s captors released a 13-minute video of him appealing to President Obama and Secretary of State John Kerry to actively negotiate for his release.

In past audio and video recordings, his captors said they wanted an end to all U.S. airstrikes in Afghanistan, Pakistan, Somalia and Yemen, and the release of prisoners. “These are things that are not within our power to give them,” Alisa Weinstein said, which adds to the family’s sense of helplessness.

State Department deputy spokeswoman Marie Harf addressed the issue of negotiations when asked about Weinstein following the latest video’s release: “We’ve long said that we don’t make concessions to people who kidnap U.S. citizens. … We’ve called on those who are holding him to release him immediately. We’ll keep working with folks to try and achieve that goal,” including the Pakistani government and the FBI, she said at the press briefing.

For this report, PBS NewsHour contacted the State Department to find out what the U.S. government can do in lieu of negotiations when an American civilian — rather than a member of the military — is being held in another country. The State Department referred us to the FBI, where a member of the press office told us they don’t typically comment on their behind-the-scenes efforts to release an American in captivity. “We’re very private about the victims,” the press officer said.

The FBI’s Office for Victim Assistance is designated to help injured victims and the families of those killed inside the United States and abroad. The FBI’s victim specialists located around the country are the primary contact for the families. The FBI website did not provide specifics on efforts to rescue citizens. 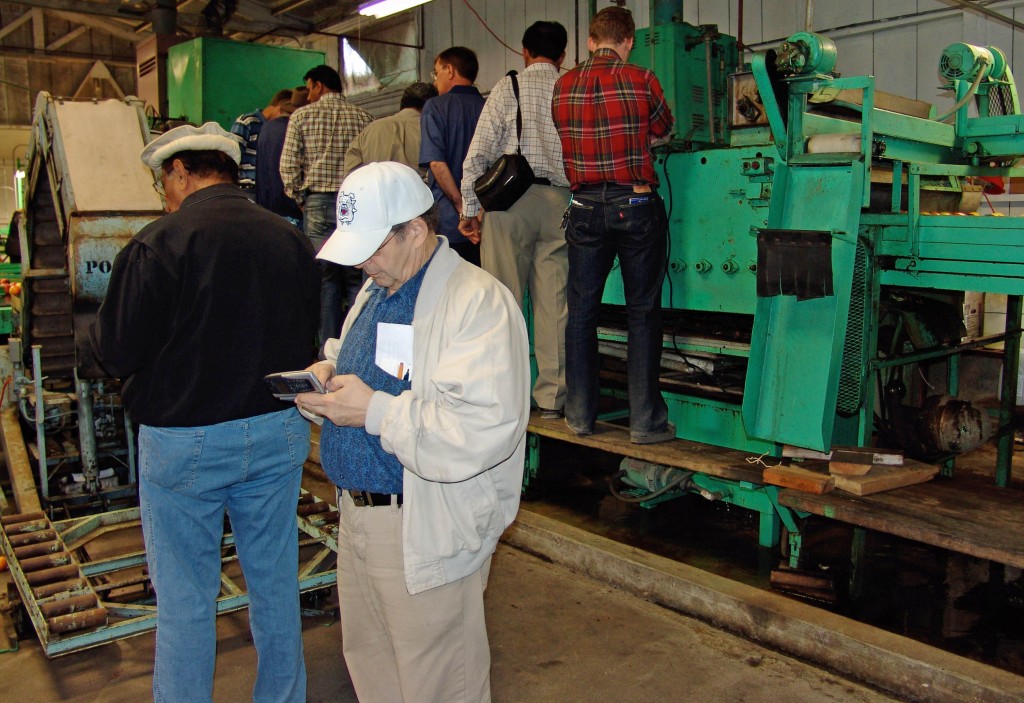 Warren Weinstein shows Pakistani farmers a commercial orchard in California’s Central Valley. As part of his job, he connected people from different countries in the same industries, so they could learn from each other. Photo courtesy of the Weinstein family

Alisa Weinstein said for the most part her family has been left in the dark by the government agencies, which has been difficult for them.

“The government tells us that they are working on my father’s case. But we don’t have any specific information about what is being done to bring him home. So that’s been very frustrating for us, especially when there’s no word of any progress,” she said.

“Sometimes, we’ll get in touch with our government contacts to say, ‘Are you still working on this?’ because we hear nothing.”

Since Weinstein’s capture went public in December, the family has had regular contact with both senators from Maryland, where Warren Weinstein’s wife Elaine lives. Rep. John Delaney, D-Md., spoke on the House floor about a resolution he introduced that highlights Weinstein’s capture and the plight of other Americans held overseas.

“We’re getting a tremendous amount of support” from the lawmakers, said Alisa Weinstein. “But in terms of the State Department and the administration at the highest levels, we feel that there just doesn’t seem to be any urgency to this case.”

In May, when word came out that the Obama administration had traded five Taliban leaders held in Guantanamo Bay prison for Bergdahl, Alisa Weinstein said she wondered why her father, who turns 73 on July 3, and other Americans Caitlin Coleman, her husband and child — also believed to be held in the same border region in Pakistan — were not included in the trade.

“My mom put it best,” she said. “Five prisoners for one American citizen doesn’t seem like a very good deal, especially when there are other hostages being held in the region.”

She said it seemed like the administration was distinguishing between hostages. “It may be a different situation technically, according to the way things are done in the United States, but it doesn’t feel nuanced to us. It feels like there was a decision to rescue one person and not to rescue others. They all deserve to be rescued.”

Weinstein said she hasn’t been in touch with the families of other missing Americans, even though she thinks about them all the time. “I think part of it is that when you’re going through something like this, sometimes reaching out to other people in the same situation is hard. It’s almost like it’s too much pain — everybody’s pain together is too much pain.”

Left: Warren Weinstein’s daughter Alisa visited him in Islamabad in the summer of 2005. Photo courtesy of the Weinstein family