50 Years Later, Looking Back at Building the Berlin Wall

It started with the placement of massive flower pots and strands of naked barbed wire stretched across streets, then grew into the massive concrete divider separating East and West Germany that would become known as the Berlin Wall.

Fifty years ago, on Aug. 12, 1961, East German State Council Chairman Walter Ulbricht signed an order to erect the wall and by midnight, construction had begun. The wall, dotted with guard towers, was intended to prevent East Germans from emigrating to the West.

Its rise into miles of fortified border marked one of the most tense periods in the Cold War, along with the Cuban Missile Crisis a year later, as American and NATO soldiers were confronting a much stronger force of East Germans and Soviets in the city that had been divided since the end of World War II.

NewsHour co-founder Robert MacNeil was a junior correspondent for NBC News and covering for a colleague in Berlin at the time of the wall’s construction. He recounted the events of that historic day.

“The East Germans with little cranes were moving huge cement flower pots and positioning them across the roadways that go under the Brandenburg Gate. And so it looked like a joke at first — they’re sealing it off with flowers,” he said.

“But when you looked to one side, going away to one’s right, toward the Potsdamer Platz, you could see that they were erecting barbed wire, a barbed wire fence, and so on the left of the gate. And so these were actually the first moments of the beginning of the Berlin Wall.” 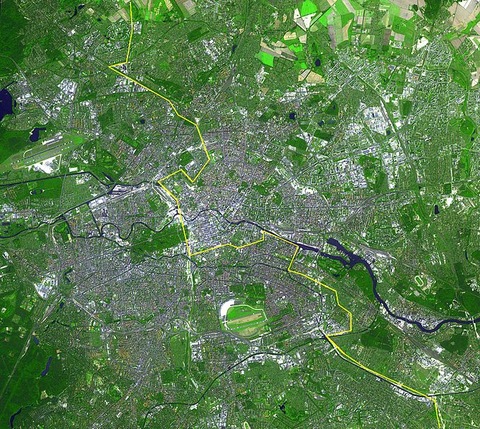 A NASA satellite image of Berlin traces the path of the wall in yellow.

When the Berlin Wall came down in November 1989, it was swift and euphoric. John Kenneth Galbraith, former U.S. ambassador to India, said on the NewsHour that the historic development “rises not from economics — after all East Germany is the most prosperous country of the Eastern bloc — I would sense that it comes out of the enormous desire of people to be heard and to participate. We’re seeing that this is a stronger motivation than many of us in the past have imagined.”

Historian Michael Beschloss, in a NewsHour interview in 2009 marking the 20th anniversary of the fall of the wall, said, “This is the moment that the Cold War really ended, because, if you look at the rhetoric of presidents and others in the free world during that period, they always said, the central issue that divides East and West is the division of Europe. Once you have that changed, that really led to the end of the Cold War.” 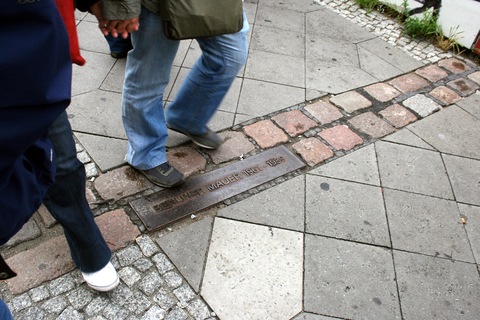 A brick line along the ground shows where the wall, or “Berliner Mauer” in German, once stood. Photo by Larisa Epatko/PBS NewsHour

Anna Engelke, correspondent for NDR German radio, said in a 2009 interview that full reunification will occur once Germans no longer differentiate between East and West Germany when describing their own background or that of others — a mindset already taking root in younger generations.

“Once we suppress that (differentiation), I think unification actually is completed and we are a united Germany,” she said.

Left: A portion of the Berlin Wall remains after the rest was torn down in November 1989. Photo by Larisa Epatko/PBS NewsHour