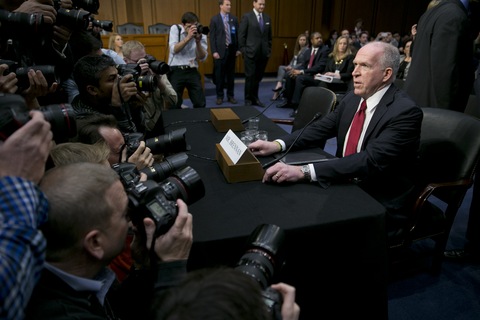 John Brennan at his confirmation hearing on Thursday. Photo by Andrew Harrer/Bloomberg via Getty Images.

Torture techniques and targeted killings came up at the top of CIA director nominee John Brennan’s Senate confirmation hearing Thursday. “I never believe it’s better to kill a terrorist than detain him,” because of the information detainees could provide, he said.

The subjects arose when Senate Intelligence Committee members asked Brennan about a 6,000-page committee report on the CIA’s former rendition, detention and interrogation program. Brennan called the report “damning,” and said “there were many things in the report that were concerning and disturbing to me,” such as mismanagement of the program and misrepresentation of the information gleaned.

He said the committee’s report, which has not been publicly released, raised serious questions about the information he was given at the time, and now he has to determine what the truth is from the CIA. “At this point, senator, I don’t know what the truth is,” he said.

The CIA shouldn’t be in the business of detention, instead it should be under the charge of the U.S. military, the FBI and international partners, where most of the interrogations are taking place, said Brennan.

Several senators asked Brennan if he also would serve as an advocate for the committee in supplying the intelligence panels with classified documents about the administration’s legal decision on targeted killings of U.S. citizens believed to be tied to terrorism and an imminent threat to the United States. He promised to be such an advocate.

Committee member Ron Wyden, D-Ore., asked if the president should be able to give a targeted American a chance to surrender.

“Any member of al-Qaida, whether they’re American or not, needs to know they have the ability to surrender anytime and anywhere” before the terrorist organization is destroyed, Brennan responded, adding, “We will destroy that organization.”

Sen. Susan Collins, R-Maine, asked if al-Qaida is still metastasizing — a term Brennan has used — like a cancer, “should we change the treatment?”

Brennan said the United States is combating “this real cancer” in a variety of ways, including using lethal force, working with partners, and addressing deficiencies in other countries of which al-Qaida is taking advantage.

On targeted killings, such as drone strikes, Brennan said some in the public mistakenly think the airstrikes are to punish terrorists for past transgressions. Not so, he said: “We only take such action as a last resort to save lives when it’s determined that no other action can be taken.”

When asked how the CIA director’s office would be able to fairly evaluate the agency’s actions, Brennan said he would look to set up a system where programs are reviewed independently, not by the people involved with implementing them.

The start of Brennan’s confirmation was delayed after repeated interruptions by audience members protesting the administration’s use of drones shouted and held up signs.

When the hearing resumed, Brennan promised the committee that in his “direct” New Jersey manner, if confirmed as CIA director he would give its members answers — “maybe not always the ones you like, but you will get answers.” (See Brennan’s full opening statement.) 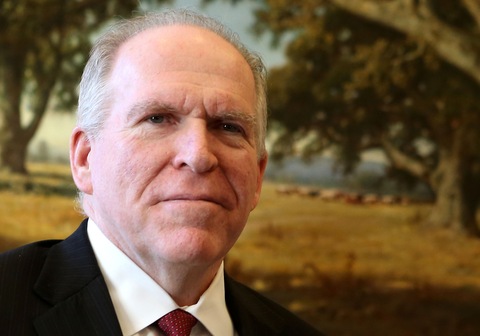 Just days before John Brennan was to appear before a Senate panel on his nomination as CIA director, a Justice Department memo was leaked that justified the killing of Americans with high-level links to al-Qaida. Under mounting pressure from Congress, the administration said Wednesday evening it would give lawmakers some classified legal documents outlining the thinking behind the decision.

Brennan likely will be asked about the memo, along with the administration’s use of drones, by Senate Intelligence Committee members on Thursday. Brennan is currently President Obama’s top counterterrorism adviser.

The legality of killing Americans suspected of terrorism was first raised when a drone strike in Yemen killed U.S.-born cleric Anwar al-Awlaki, who was considered a top-level al-Qaida operations planner and recruiter.

The U.S. drone program, part of which is operated by the CIA, has ruffled feathers abroad, particularly in Pakistan where use of the unmanned aircraft to hit suspected terrorist hideouts is viewed as flouting the southern Asian country’s sovereignty. Use of drones has vastly increased under the Obama administration.

Meanwhile, the unclassified Justice Department memo leaked this week said a lawful killing must meet three criteria: that the target poses an imminent threat of violence against the United States, that the individual’s capture is infeasible and that the operation would abide by law of war principles.

Hina Shamsi from the American Civil Liberties Union’s National Security Project said on Tuesday’s NewsHour that the memo was particularly “chilling” for not requiring a specific plot or other evidence when determining if the person was an imminent threat.

But Matthew Waxman of Columbia Law School said the memo was as “careful and narrow” as it could be in situations that arise during the ongoing armed conflict with al-Qaida.

We’ll have more highlights of Brennan’s confirmation hearing on Thursday’s broadcast (updated with link). View all of our World coverage and follow us on Twitter: