A British member of parliament, Jo Cox, was killed in northern England on Thursday, days ahead of a referendum on whether the UK should leave the European Union, known as “Brexit.”

Cox, 41, was shot twice and stabbed in Birstall, West Yorkshire, after attending a meeting with her constituents. She later died from her wounds.

A 52-year-old suspect was arrested in the area, police said. A witness told the Guardian that he heard the man, who was locally identified as Thomas Mair, shout “Britain first” before launching the attack.

Officials said it was unclear if the incident was related to the June 23 Brexit vote.

Both sides on the referendum said they would suspend campaigning. British Prime Minister David Cameron cancelled a speech he intended to make in Gibraltar. 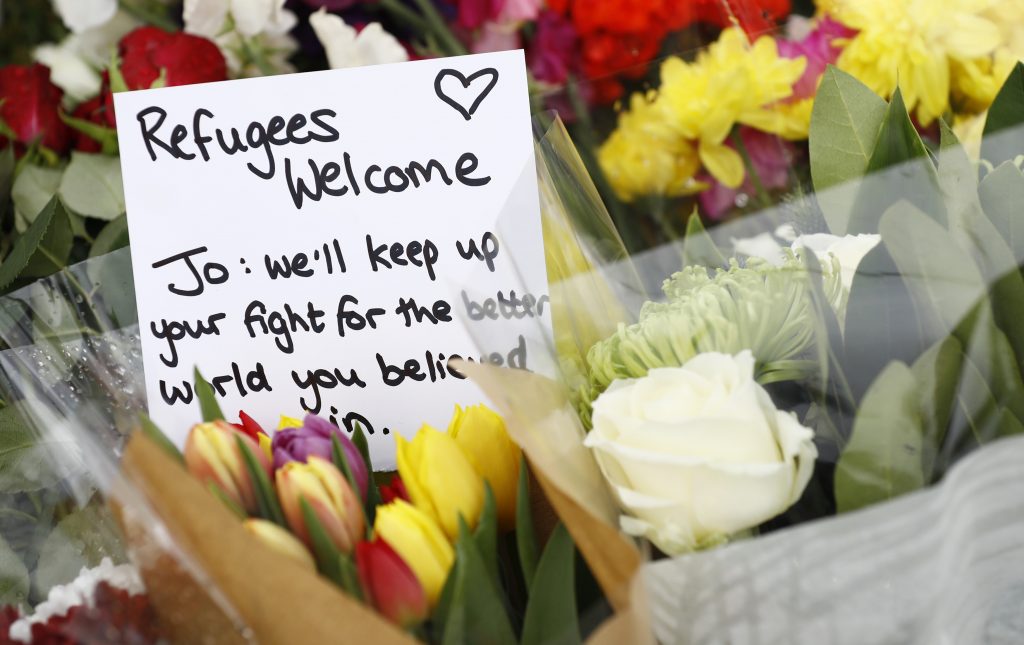 A memorial to Labor Member of Parliament Jo Cox, who was killed Thursday, in Birstall, England. Photo by Stefan Wermuth/Reuters

Cox has been described as a rising star in the Labor Party. She previously worked in the aid industry at Oxfam and reportedly often called for Britain to do more for the Syrian refugees.

She was married with two small children. Her husband Brendan Cox posted a tribute to her on Twitter:

In a statement, Brendan Cox said:

“Today is the beginning of a new chapter in our lives. More difficult, more painful, less joyful, less full of love.

“I and Jo’s friends and family are going to work every moment of our lives to love and nurture our kids and to fight against the hate that killed Jo.

“Jo believed in a better world and she fought for it everyday of her life with an energy, and a zest for life that would exhaust most people.

“She would have wanted two things above all else to happen now, one that our precious children are bathed in love and two, that we all unite to fight against the hatred that killed her.

“Hate doesn’t have a creed, race or religion, it is poisonous.

“Jo would have no regrets about her life, she lived every day of it to the full.”

Left: British Member of Parliament Jo Cox is seen in this 2015 file photo by Yui Mok/Press Association/Handout via Reuters