Reporter in Egypt: Contained ‘War Zone’ in Parts of Cairo 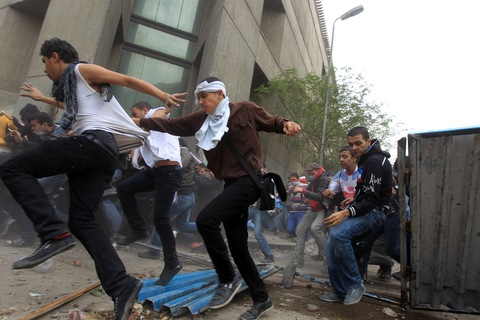 For a third straight day in Egypt’s capital Cairo, police tried to beat back protesters who were flinging rocks and Molotov cocktails, angered by a draft constitution guideline that they say gives the military too much power.

“The air has been blanketed with white, thick tear gas all day long,” he told us by phone from the frontline of the clashes. “And there’s been a very aggressive push by the protesters to confront police. … They’re chanting ‘down with the field marshal’ and ‘down with military rule.'”

The momentum of the battles continues shifting, he said. “The protesters will rush and the police will fall back, or vice versa, sort of depends on which way the wind is blowing and pushes the tear gas. … It’s a war zone. It looks like a war zone right now,” though it is contained to certain streets.

Jensen describes more of the scene with gunfire crackling in the background:

The military is overseeing the country’s transition to democracy — following the fall of President Hosni Mubarak in February — and has promised to turn over power after presidential elections in late 2012 or early 2013.

But protesters want to move immediately to a civilian-led government. They are upset by wording in a legal document that says regardless of whichever party wins, certain principles should be included in the constitution. The military tried to include language that removed oversight by parliament of their budget, Jensen said.

Frustration leading up to parliamentary elections, which will begin on Nov. 28, boiled over last weekend with protests in Cairo’s Tahrir Square — the epicenter of the protests that led to Mubarak’s ouster.

A spontaneous peaceful protest sprang up in Tahrir Square on Friday, but several hundred people decided to stay and set up tents to spend the night. The Egyptian riot police dispersed the crowd, throwing away or burning their tents, said Jensen.

Those efforts by security forces and police to drive the demonstrators out of the square have only inflamed the protests.

At least 24 people have been killed in the three days fighting, according to the Associated Press, and more than 1,000 injured.

The turmoil and concerns over security threaten to delay the parliamentary vote, which Egypt’s government and the United States are arguing against. “The United States continues to believe that these tragic events should not stand in the way of elections,” said White House spokesman Jay Carney, urging both sides for restraint, Reuters reported.

Egyptian state television reported late Monday that Egypt’s Cabinet has submitted its resignation to the ruling Supreme Council of the Armed Forces. Al Jazeera is citing unnamed sources as saying the military council will accept it.

We’ll have more on the developments in Egypt on Monday’s NewsHour. View all of our World coverage and follow us on Twitter.

Italy tries to contain virus as neighbors fear its spread

India pours on the pageantry with colorful welcome for Trump