How easy is it to send an email in Cuba?

It’s getting a little easier to send an email in Cuba these days. Over the past few months, about 35 new WiFi hotspots have opened in parks, plazas and schools.

People can go to these public spots with their laptops and cellphones, and pay $2 per hour to access the Internet. The price went down from $4.50 an hour, but $2 — about 10 percent of the average Cuban’s monthly income — still makes it prohibitively expensive for many, said Raul Moas, executive director of Roots of Hope, a Miami-based nonprofit working to increase Cubans’ access to technology.

But for Cubans who can pay, it’s a welcome development since the relaxing of U.S.-Cuban ties. Family and friends living outside Cuba had been telling them about the Internet’s usefulness for years, said Moas, causing Cubans — particularly the younger generation — to clamor for this. 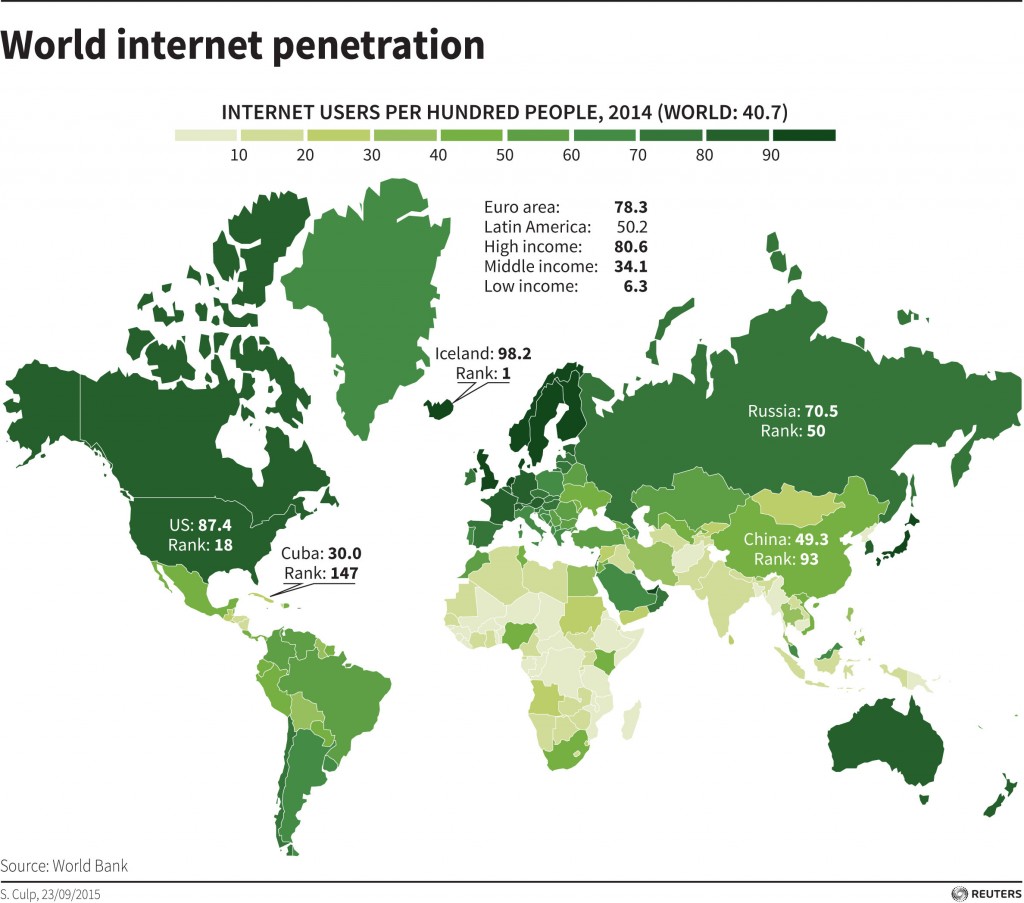 The Internet is relatively new for many Cubans. The communist nation is ranked 147, one of the lowest in the world, for Internet accessibility, according to the World Bank. By comparison, the United States is ranked 18th.

Although the Cuban government probably won’t stop censoring the Internet any time soon, it is realizing the Internet is a force for revitalizing a semi-flat-lined economy, said Moas. “They’re looking at how the Internet is being used in (other communist nations) Vietnam and China to see how it’s an economic driver.”

Havana is learning that in order to attract foreign investment, it needs to be more tied-in globally, and Internet connectivity is a large part, he said. “How can companies (either foreign or homegrown) set up shop in Cuba without high-speed Internet?” he added.

The government also is finding that it can charge $2 an hour, and the Cuban diaspora will pay it, much as it does for pre-paid cellphone service plans for family members inside the island nation, Moas said.

One of the ways Cubans inside and outside the country are making use of the new connectivity is with a free video chat and call service, called “imo,” which functions like Skype. “Families literally have not seen each other for many years are now starting to see each other via video chat and there’s a whole flow of emotions,” he said.

Even at 3 a.m., you’ll see the glow of device screens at the hotspots, said Moas. While the new access is a “very positive step,” the test is how quickly the government will lower costs and create even more hotspots, he added. “In a country of 11 million people, 35 hotspots won’t meet the demand.”