Jimmy Carter: If Egypt’s Ruling Military Goes Through With Plan, Same as Coup 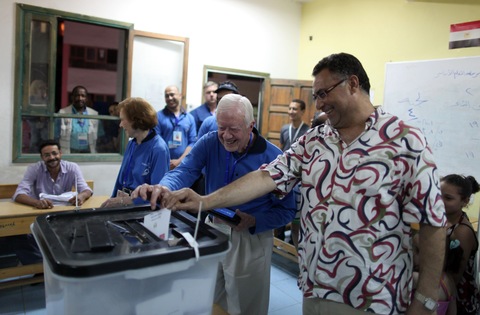 Former President Carter helps an Egyptian voter at a polling station in Cairo on May 24 during the first round of presidential elections. Photo by Wissam Saleh/AFP/Getty Images.

“If [the military generals] go through with their announced plans and take over the complete writing of a new constitution and usurp the powers of the president person, then it would be the same effect as a military coup restoring to the military the full executive and legislative powers of the government and even giving them new powers to write a new constitution more to their liking,” Carter told NewsHour senior correspondent Jeffrey Brown by telephone on Wednesday.

“I hope it doesn’t go through and that the United States and others will speak out strongly enough to have influence on the military to control and to carry out the promises that they made to me and to the Egyptian people and to the international community.”

A constitutional court dissolved the parliament this week, deeming ballots in certain districts invalid. The Supreme Council of the Armed Forces then issued a constitutional declaration giving itself increased authority to serve as checks and balances for the president in the absent of a parliament.

As for monitoring Egypt’s presidential vote, Carter said although his center’s monitors were able to watch the voting, they weren’t given permission to witness the vote-counting. “This is quite a departure from what we’ve done in other countries,” he said.

He had a positive take on both of the presidential candidates, Muslim Brotherhood’s Mohammed Morsi and former Prime Minister Ahmed Shafiq, who entered a runoff last weekend. The results, expected Thursday, were delayed. Both candidates have declared themselves the winner.

Carter said he knows the Western-educated Morsi “quite well” and that he appears committed to women’s rights and the Egypt-Israel peace agreement.

“I’ve crossed-examined him in my own private way very thoroughly about adherence to the terms of a peace treaty for instance between Israel and Egypt that I happened to negotiate back in 1979. He assured me that he honored those terms and he’s been quite an outspoken champion I would say of the basic four freedoms that should relate to any country,” said Carter.

Shafiq also appears to support the peace agreement, said Carter. As an added assurance, he said any change to the obligation must involve Israel. “And so they’ll have to negotiate any changes that they want to make.”

Listen to the full interview: