Even in countries that are reeling from natural disasters or conflict, children desire the same thing: a place to congregate and play … and sometimes party.

When Typhoon Haiyan struck the Philippines on Nov. 8, among the many resulting disasters was an oil spill in Iloilo province in the central part of the country. Residents had to move to temporary shelters to escape the contamination and noxious fumes. By Christmastime, they were still away from home.

To help lift their spirits, Save the Children, which had set up recreational areas for children at evacuation sites, organized little parties with singing, dancing and other performances.

One child named Brian, whose coastal home was destroyed when a ship washed ashore, told the supervisors how happy the party made him, said Katie Seaborne, Save the Children’s communications and media manager in the Philippines, who had recently returned from Tacloban, another hard-hit area. “It really felt as if we had brought some happiness and hope to the families living there.” 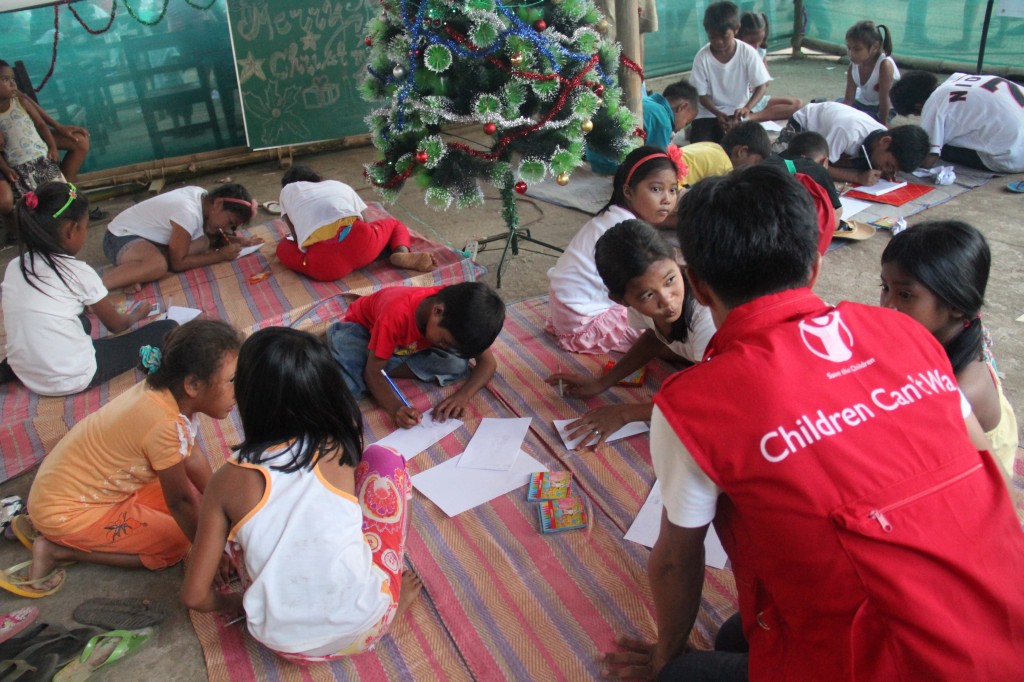 Designated “child-friendly space” in the Philippines. Photo courtesy of Save the Children

International aid organizations such as Save the Children and UNICEF coordinate these “child-friendly spaces” in countries impacted by crises. The organizations provide the funding and training, and local grassroots groups and volunteers run the centers.

In war-torn Syria, UNICEF has helped establish child-friendly spots in cities such as Homs, Damascus, Latakia, Daraa and Aleppo. Some are located on school grounds and are operational after school hours, while others are set up in tents or open spaces, supplied with sports equipment, toys and art materials, said Insaf Nizam, child protection manager for UNICEF in Syria.

“We want children to come out of the classroom, and take a break from the routine. It creates a group environment where children can mix with each other,” he said.

Most of the children and their families have been displaced from the fighting between Syrian government forces and rebels. Battles erupt with little warning, causing families to scramble to other less violent areas, leaving most of their belongings behind. The upheaval can be especially jarring to children, so the organized play areas are designed to provide a safety zone where they can express their often distressed feelings through drawing or other activities, said Nizam.

The displaced families live in improvised shelters, including abandoned buildings and converted schools, he said. “They are crammed into them. Each family gets a portion of a classroom separated with plastic sheets and a couple of bags to keep their stuff.”

The recreational opportunities give children an escape from that environment, and their parents benefit as well. Parents can use the child-free time to try to earn a living and repair their homes, not to mention have some alone time, said Seaborne from the Philippines. “In emergencies, we know that stress levels and cases of abuse increase. By providing a safe space for children, we allow a family to have some space and time for reflection — mitigating these risks,” she said.

Safety is a big consideration, not only for the children and families but for the staff running the child-friendly sites as well, said Nizam. To help deal with the dangers in Syria, UNICEF and its partner organizations are transitioning to mobile units, sending carloads of supplies for volunteers to conduct daytime activities and then packing up at night.

That mobility also helps when whole communities are uprooted due to fighting, he said. The residents might scatter, “but at least you can follow the majority of the community that has been displaced and support them.”

The local groups also try to coordinate with local officials on finding safe places to set up, which indirectly might postpone or prevent conflict from escalating in that area, said Nizam. “Not that we are involved in conflict-resolution, but in areas where groups go sometimes there is less fighting. It’s protection by presence.”

The PBS NewsHour’s Social Entrepreneurship page is starting a new series profiling people helping children. Give us your suggestions for more child-focused groups in the comments section below or tweet us.