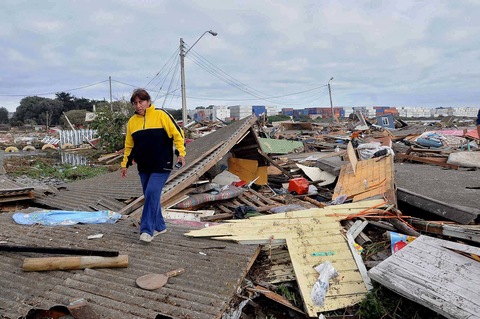 The night of Chile’s massive earthquake, Pascale Bonnefoy, GlobalPost correspondent in Santiago, had just returned home from vacation and gone to bed when she awoke to a house “jumping up and down.”

“We were on the second floor just clinging to the walls while everything crashed down all around us,” she said in a telephone interview Monday morning, three days after the 8.8 magnitude quake.

Many areas in the capital Santiago were still without electricity or Internet service by Monday, and some people were sleep outdoors because their homes were damaged or they feared aftershocks, she added.

Damage was much more widespread along the southern border, Bonnefoy continued, where tsunamis with tidal waves as high as 15 meters wiped out fishing towns, and parts of port and industrial cities.

“And people who lost everything are still living up on the hills with no water, no food. Help has been really slow in getting there,” she said.

Looting and vandalism has increased since Saturday as people become more desperate. “The first couple of days, people were going into supermarkets taking food. The police was kind of letting them do that,” said Bonnefoy. “But now it’s just turned into break-ins into homes, apartment buildings stealing whatever from wherever they can, looting appliances, TV set, toys with a lot of violence. And the police is responding with violence.”

The government on Sunday declared a state of catastrophe in the southern areas hardest hit, and the army has taken control of cities to help with food and water supplies and rescue efforts. The official death toll hit 711, but the number was expected to rise with many people still unaccounted for from the tsunamis, she noted.

Another issue that is expected to gain some traction in the coming days is that of building regulations, which require new construction to be earthquake-resistant but appeared to have gotten lax over the past few decades, said Bonnefoy.

For example, near her home, an apartment building that just opened last year had to be evacuated since the two ground floors were sinking, she said. “So that’s going to be a major issue … later on though.”