Updated Oct. 3 | Colombians narrowly rejected the peace deal on Sunday, sending negotiators back to the drawing board in Cuba, where the agreement was brokered.

It was a historic moment: Colombian President Juan Manuel Santos shaking hands after signing a peace agreement on Monday with Rodrigo Londono, the FARC rebel leader once hunted in the jungles of Colombia.

The peace deal, which took four years to negotiate, ends a 52-year civil war between the Marxist rebels and the Colombian government that left more than 220,000 people dead.

“This is … the last of the armed conflicts in the whole hemisphere, and I think that now we can start addressing other type of challenges that we have,” Santos said after the signing ceremony in Cartagena.

Colombians will vote on the accord in a referendum on Sunday.

Over the next few months, members of the Revolutionary Armed Forces of Colombia (FARC) will turn over their weapons to U.N. inspectors. In return, the former guerilla fighters will be granted amnesty or reduced sentences for crimes they committed, through a “transitional justice” system. 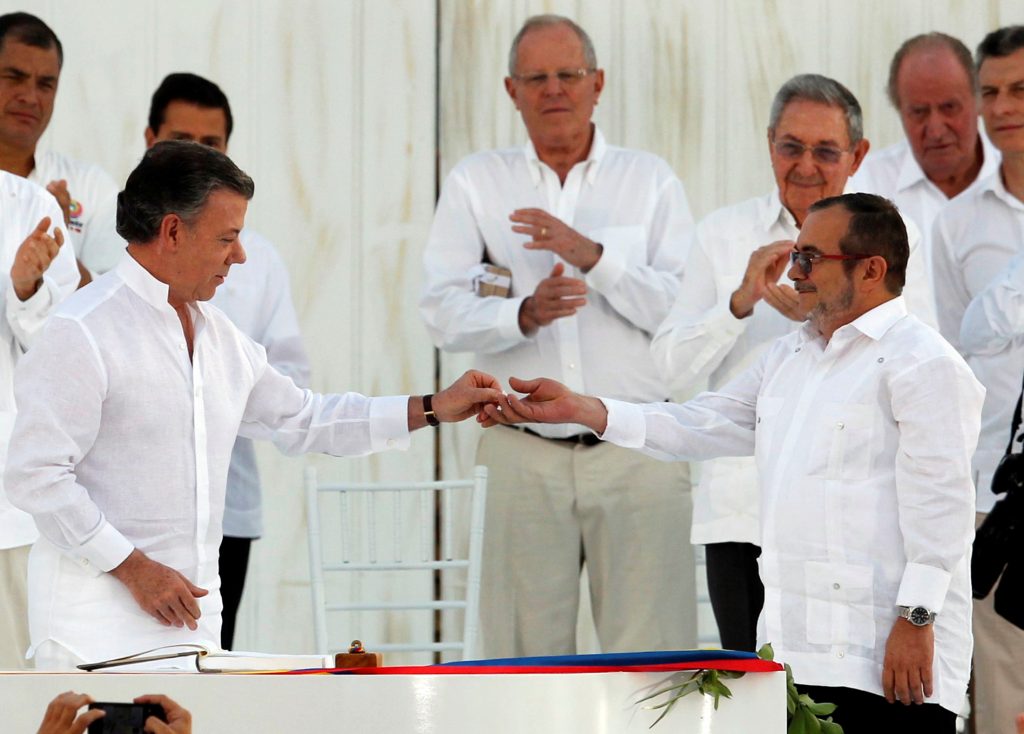 Colombian President Juan Manuel Santos (left) hands a lapel pin in the shape of a dove to Marxist rebel leader Rodrigo Londono, better known as Timochenko, after signing an accord ending a half-century war. Photo by John Vizcaino/Reuters

In a statement, Amnesty International said the transitional justice model helps ensure justice and reparation for some of the victims of the conflict. But it also falls short on international standards for victims’ rights by serving punishments that don’t reflect the severity of the crimes.

“The crimes of those who carried out, ordered or benefited from these abuses, including those in business and politics, cannot and must not be brushed off with the stroke of a pen,” said the organization’s Americas Director Erika Guevara-Rosas.

The International Organization for Migration said it is working with the Colombian government on a large-scale reintegration process for the former fighters and on efforts to ensure children aren’t recruited into other criminal gangs.

Santos has said that if former rebels return to their criminal ways “they will lose all the benefits. They will go to prison through ordinary justice – 50, 60 years. They know that.”

U.N. Secretary-General Ban Ki-moon, who was present at the signing, said negotiators worked out other key issues as well, such as land rights and participation in the political process. He praised the “countless Colombians who never lost hope in peace.”

Watch a PBS NewsHour report on how the peace deal might impact Colombia’s drug market.

Left: Colombians hold the letters for "peace" in Bolivar square in the capital Bogota on Sept. 26. Photo by Felipe Caicedo/Reuters