The Colombian government on Wednesday formally entered peace talks with the second-largest rebel group, the ELN, even as it continued to work on finishing the terms of a peace accord with the FARC guerrillas. One human rights advocate said ELN’s involvement will make the peace process “complete.”

The government and National Liberation Army, or ELN, had been in exploratory talks for more than a year before the announcement came Wednesday. The negotiations will take place in Ecuador’s mountainous capital Quito.

Franklin Castenada, president of the Committee in Solidarity with Political Prisoners based in Bogota, Colombia, hailed the development, saying it will allow for more profound changes in the country.

“For us, it’ll mean a peace process that’s complete,” and will fully close the chapter of Colombia’s 50 years of internal strife, Castenada said through a translator on Wednesday.

The addition of the ELN will allow greater restructuring of the government that had been focused on conflict, such as the role of the army and security forces, and dedicate more of the budget to health care and education, he said.

“It will allow us to build a country that’s different where we can use democracy toward all conflicts and not violence. We’re really pleased and have been pushing for it and support it.” 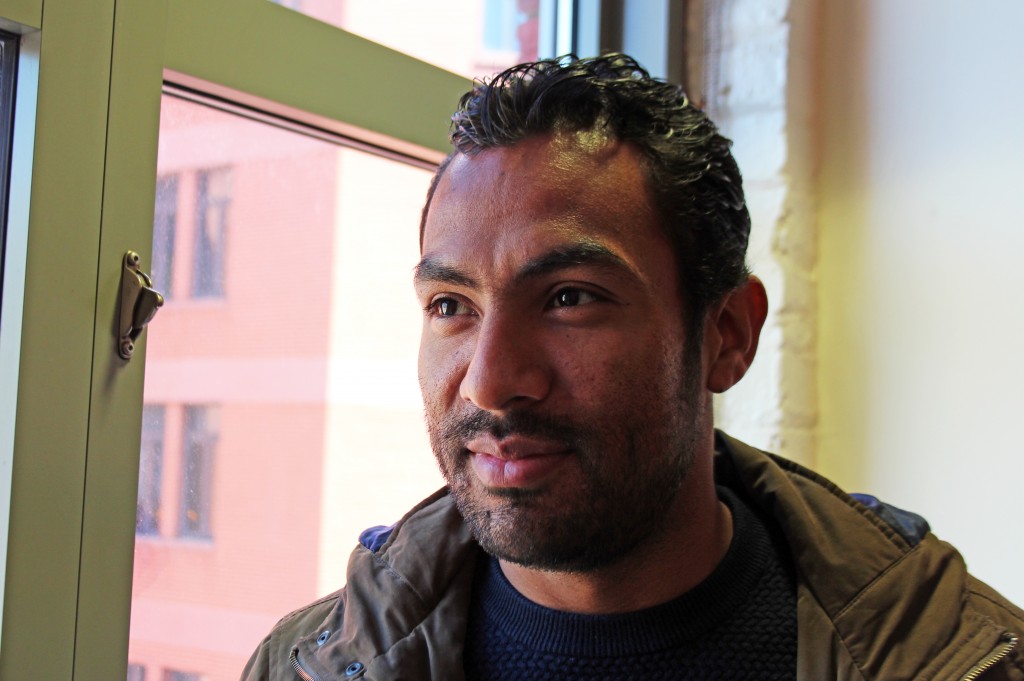 Franklin Castenada, president of the Committee in Solidarity with Political Prisoners in Colombia, said the development of ELN rebels entering peace talks with the government will help make the peace process “complete.” Photo taken on March 30 by Larisa Epatko

The welcome news came a week after the Colombian government and the FARC (Revolutionary Armed Forces of Colombia) were supposed to sign a peace accord to end the country’s 50-year civil war that has left an estimated 220,000 people dead. They have been negotiating in Havana, Cuba, since November 2012.

Although both sides delayed signing the agreement by their self-imposed deadline of March 23, they said they are still committed to the deal and hope to complete it by the end of the year.

The government and FARC forces have agreed to about 80 percent of the terms, including land and rural development, the rebels’ future engagement in politics, end of drug-trafficking, and how to account for crimes during the five decades of conflict. But disagreements remain over a ceasefire and how the Marxist rebels would disarm.

Paramilitary groups, whose members are blamed for intimidating and harming human rights advocates, need to be dismantled structurally, said Castenada. The violence against human rights activists has continued even during the current peace process, he said.

Past efforts to demobilize Colombia’s paramilitary forces in the mid-2000s didn’t succeed largely because of misapplication of the justice system, he continued. The forces are more than just men with guns; they have a whole political and economic structure behind them, so efforts to disband them need to focus on the employers and brains behind their operations, along with the politicians and others who benefit financially from them, he added.

The concern for those backing the peace process is that in a country with a large poor population, “You’re always going to have young men who for essentially a few thousand dollars are going to be willing to pick up a weapon and join one of these groups,” he said. “So what you need to do is actually get to the heads of it.”

In addition, the links connecting the paramilitary to the state must be severed, including changing military doctrine that deems people who are speaking out peacefully against government practices as an “internal enemy” and by investigating those who collaborated with the groups involved with killing human rights and civil society activists, said Castenada.

The FARC and government negotiators are grappling with those issues now, he said.

After 50 years of conflict, Marxist rebels are emerging from hiding and are worried that if they become a purely political entity, they will face crackdowns by paramilitary groups.

Wednesday’s NewsHour reported on the FARC’s role in the coca trade and whether a peace deal can do anything to stifle Colombia’s top export.