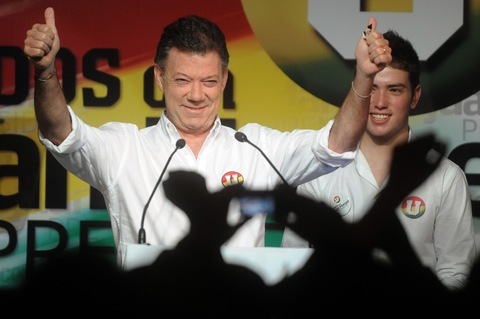 Santos won 47 percent of the vote, compared to Mockus’ 21 percent out of a field of nine candidates. Since no candidate received more than 50 percent, Santos and Mockus will square off again in a runoff on June 20.

To learn more about what the results of the election might mean heading into the runoff, we spoke to Michael Shifter, president of the Washington, D.C.-based Inter-American Dialogue:

Were the election results a surprise?

“I think the main surprise of yesterday’s election was the margin of victory for Juan Manuel Santos of the U Party. Most polls predicted that he would win by 3 or 4 points. He won by 25 points over the second-place finisher, Antanas Mockus (of the Green Party). And there will be a run-off on June 20.

“But I think the big surprise for a lot of commentators and a lot of observers was simply that this was a rout, this was really a substantial win, and most of the polls and most of the predictions suggested it would be neck-and-neck after the first round.”

Why do you think there was such a difference between the poll numbers and the election results?

“I think there were a variety of reasons. First of all, there were more recent polls that were not allowed to be divulged a week before the election, which showed clearly that Santos’ lead was widening. These were not disclosed, but people who were familiar with the polling companies knew that in fact his lead was widening.

“A second factor is that the polls underrepresented rural areas, where a lot of people don’t have phones and communication is not as easy. And so therefore, the polls had an urban bias, and most of the urban areas are much more favorable toward Mockus, and the rural areas are more inclined toward Santos, who is the candidate of the current President Alvaro Uribe.

“But I think the main reason was simply that Mockus who had attracted this enormous enthusiasm and had this surge of support, I think in the end had more fans than voters. The polls showed a lot of people who had been part of his campaign really didn’t come out to vote on Election Day, and so the turnout was disappointing.

“And also, a lot of them I think changed their vote when they went into the voting booth. There was a sense that Mockus was very attractive, he had a very appealing message but that he was still a novice when it came to security issues and foreign policy issues. He had made a number of gaffes in the debates and interviews about how he would deal with
Hugo Chavez or how he would deal with requests for extradition of Uribe. And he did not inspire a lot of confidence. He was not reassuring to people.

“So I think there was a flirtation with Mockus that I think became a little bit more serious and people were not willing to take that risk once they went into the voting booth. There, I think, was the main factor — that he was just seen as too big of a risk at the end.”

What will we see the two candidates doing leading up to the run-off election?

“Well, I think we saw a little bit of what Santos would do with his speech last night, which was a very I think effective call for national unity. He is in a formidable position. He is basically going to play the role of not going to attack anybody, but really try to embrace the rivals, try to get support from the other parties, including Antanas Mockus. He will underscore his calls for national unity, for reconciliation and the like. That I think is going to be his focus. I think that if he doesn’t commit any serious mistakes and there are no major scandals or controversies that come out, he’s in an extremely strong position to win the runoff on June 20.

“Mockus, I think also we got a flavor of what his campaign is going to be like. But of course, he has a really uphill battle. His supporters are probably demoralized. I think they all expected a better result than they got yesterday. He’s going to continue to stress his themes of a different kind of politics, that Santos represents politics as usual, is associated with corruption scandals, clientelism and government that hasn’t been very clean or very transparent. He’s going to drive home that point.

“And, of course, he’s going to try to build support with some of the minor candidates who are not getting into the second round, especially some candidates from the left, which got about 10 points, and some other candidates as well, to see whether he can mount some sort of recovery, some sort of rebound.

“But he clearly is in a very, very difficult position and it’s going to be very tough for him to really pose an effective challenge to Santos in the second round, who almost within a few points won the first round yesterday.”