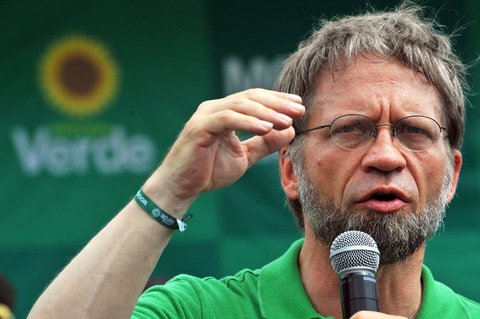 Colombia’s presidential election on May 30 is developing into an unexpectedly tight race between a Green Party candidate who represents a new face and anti-corruption efforts, and a former defense minister who promises to carry out the current fight against Colombia’s rebels.

In February, President Alvaro Uribe was constitutionally barred from running for a third consecutive term, producing a free-for-all for other candidates and a relatively short campaign season leading up to the May vote.

As the field winnowed down, two candidates have emerged at the top.

Antanas Mockus is a two-term mayor of Bogota and member of the Partido Verde, or Green Party. He portrays himself as a fresh candidate who’s working against government corruption, said John Otis, GlobalPost’s correspondent in Bogota.

The other leading candidate, Juan Manuel Santos, is seen as Uribe’s heir apparent and was successful as defense minister managing military raids against FARC rebels. In one instance, the military rescued 15 guerilla-held hostages including three American contractors without a shot being fired, and the country’s overall kidnapping and murder rates have dropped.

“That’s Juan Manuel Santos’ calling card. He says ‘I will continue Uribe’s national security programs, and I’m the best person to be able to do that’,” Otis said.

Some voters, who are tired of Uribe and are looking for a fresh start, may turn to the “maverick” Mockus, who has been known to employ some creative tactics as mayor. In order to improve drivers’ behavior, Mockus put mimes on the streets of Bogota to mimic reckless drivers and try to shame them into improving their behavior, said Otis. “He’s very much in the whole issue of educating people to be better citizens.”

Other voters, concerned about the security situation deteriorating with Uribe’s departure, may see Santos as their man. “Nobody knows who’s going to come out on top this time,” said Otis. “It’s completely unpredictable.”

One area of commonality between the candidates is their intention to continue strong relations with the United States, which provided about $500 million in aid in 2009, mostly for the military and anti-drug efforts, he said.

If no candidate receives 50 percent of the vote, the election will go to a runoff on June 20.