Confusion, questions and handcuffs met this Sudanese scholar at the airport

Student Nisrin Elamin of Sudan describes what was different this time when she arrived at JFK airport in New York late Friday night.

Sudanese-born Nisrin Elamin, a Ph.D. student studying anthropology at Stanford University, was used to intensive questioning when she reentered the U.S. on a student visa.

But on Friday night, she experienced it even with her green card. Hours before, President Donald Trump had signed an executive order temporarily banning visa-holders from seven countries deemed a national security threat.

“I was handcuffed very briefly at which point I started to cry, not so much because of the handcuffs but because at that point I felt that I was probably going to get deported, or that I wasn’t going to be able to get in,” Elamin, 39, told the PBS NewsHour.

The customs and border protection officers had just gotten word about the new executive order and appeared to be figuring out how to comply, she said. They asked her the usual questions about her work and education, and then one admitted he didn’t know much about Sudan, her home country.

After further questions about Sudan’s political situation, radical groups and views, Elamin was allowed to leave five hours later. “I grabbed my passport and green card and got out of there before they changed their mind.”

The stepped-up scrutiny is part of the Trump administration’s broader effort to make America more secure. The order signed Friday halts visa-holders from seven countries — Iran, Iraq, Libya, Somalia, Sudan, Syria and Yemen — from entering the U.S. for 90 days while U.S. officials determine whether they are getting enough information from their home countries to fully vet them.

Customs and border protection officials in U.S. airports reportedly detained dozens of arrivals over the weekend from the listed countries, sometimes for hours, to ask additional security-related questions.

A federal judge in Brooklyn, New York, issued an emergency stay on Saturday that temporarily prevents the government from deporting people arriving at any airport in the U.S. with valid visas.

The Department of Homeland Security, under newly approved Secretary John Kelly, issued a series of statements on Sunday to clarify the order, including that it doesn’t apply to “permanent residents” of the U.S. The department also said it is working with airlines to ensure people aren’t allowed to board U.S.-bound flights if they fall under the terms of the order, to avoid having to detain people.

When asked about people who were detained at airports, White House press secretary Sean Spicer said on NBC’s Meet the Press over the weekend that “if they’re folks that shouldn’t be in this country, they’re going to be detained. So apologize for nothing here.”

The Council on American-Islamic Relations on Monday filed a federal lawsuit challenging the constitutionality of the president’s executive order. “Its apparent purpose and underlying motive is to ban people of the Islamic faith from Muslim-majority countries from entering the United States,” the group said in a statement on its website. 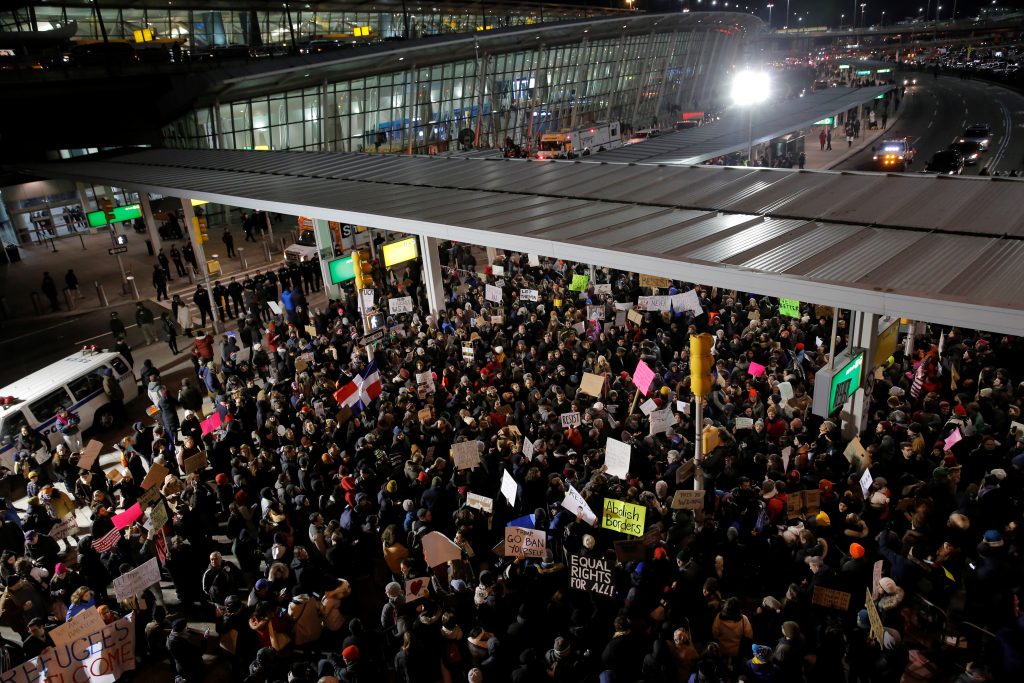 Protesters gather outside Terminal 4 at John F. Kennedy airport in New York on Jan. 28 in opposition to the executive order putting the visa-holder and refugee programs on hold. Photo by Stephen Yang/Reuters

The order touched off protests across the country, from Los Angeles to Boston. Outside John F. Kennedy airport, where Elamin was held, crowds gathered holding up signs that said, “Refugees are welcome here” and “Let them in.”

The executive order has ruffled some feathers abroad. The Iranian Foreign Ministry said Saturday that it would stop U.S. citizens from entering Iran in response to President Trump’s order.

And the Iraqi parliament voted to ban Americans entering Iraq on Monday, the Associated Press reported. The full Iraqi Cabinet would have to approve the ban on Americans for it to take effect.

The order also suspends all refugees from entering the U.S. for 120 days, and those from Syria indefinitely, while officials review the screening process.

“It really broke my heart to think about the implications for a lot of people who weren’t as lucky as I was, who were possibly being sent back to war zones or places where they were fleeing political persecution,” said Elamin. 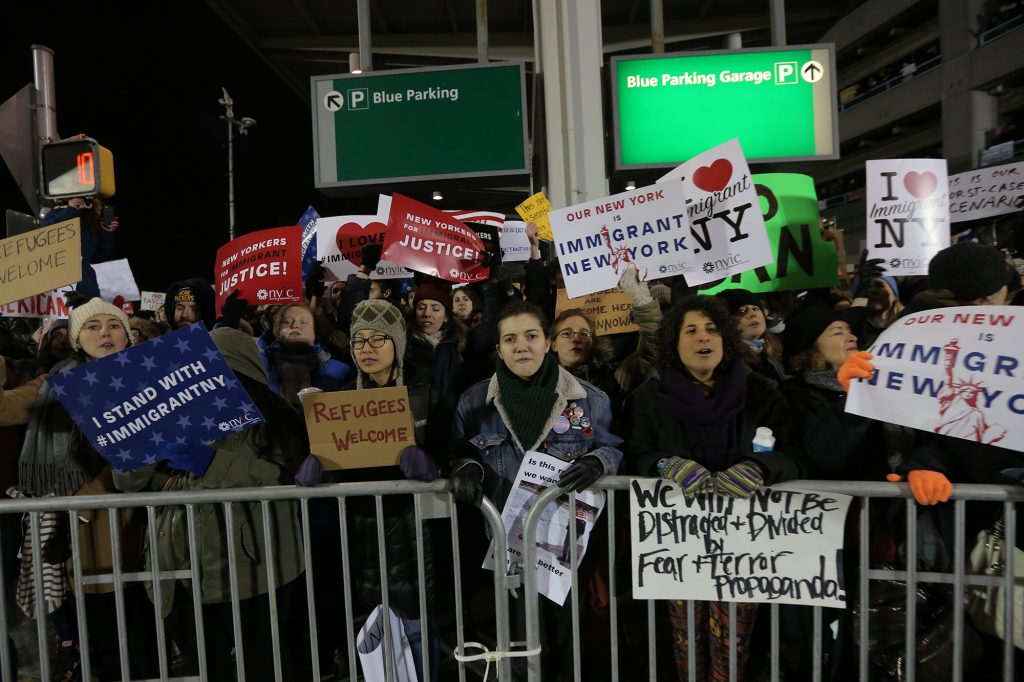