Children born with clubfoot in low-income countries don’t have many prospects if the abnormality is left untreated: they often can’t walk and the stigma makes it difficult for them to marry and find work. The standard correction used to be a complicated surgery that didn’t always take. Once a non-surgical method was developed, it became critical to train doctors and spread the word around the world.

In the 1950s, Spanish physician Dr. Ignacio Ponseti created a non-surgical method to correct clubfoot by realigning the child’s feet with a series of plaster casts, followed by wearing a foot brace at night for four years to prevent relapse.

Chesca Colloredo-Mansfeld, now co-founder and executive director of the nonprofit miraclefeet, worked at the University of Iowa’s business school while he was on the orthopedic faculty.

“Living in Iowa City you couldn’t help but hear about this doctor because people were flying from all over the world and all over the U.S. to bring their children to be treated by Dr. Ponseti,” she said.

Colloredo-Mansfeld, who had a background in business and strategy, along with an interest in Africa and the developing world, got word that Ponseti, at the time 90 years old, wanted as “his dying wish” to expand what had become known as the Ponseti method to the rest of the world.

She, too, wanted to make known the relatively low-cost, non-surgical way of addressing the pervasive problem. 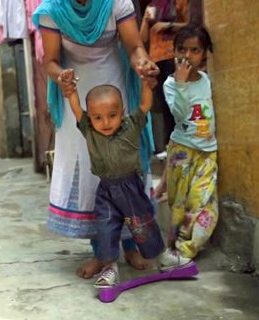 A child wears a purple plastic brace that helps keep his feet from turning back inward. Photo courtesy of miraclefeet

Of the 100,000 babies worldwide born with the clubfoot congenital abnormality, 80 percent of cases are in developing countries, according to the World Health Organization.

“The doctor had figured out how to treat it and I knew there were all these children around the world who couldn’t walk because of clubfoot, and I just felt like something had to happen. That this was a no-brainer,” she said.

The University of Iowa, which was focusing on training doctors in the method, put her in touch with a group of parents who had just started an organization called miraclefeet to bring the non-surgical treatment to low-income countries where clubfoot was most prevalent.

Colloredo-Mansfeld started out as a volunteer with the nascent group in 2009, writing business presentations and educating the organizers about the challenges in developing countries. She joined their board of directors and later became their first full-time employee. Now, miraclefeet has 12 full-time staff members in Carrboro, N.C., and a program manager for Asia who is based in the Philippines.

The group launched its first project in Sao Paulo, Brazil, in October 2010 and has since grown to Botswana, Ecuador, India, Liberia, Mexico, Namibia, Nepal, Nicaragua, the Philippines, South Africa, Tanzania and Zimbabwe.

When miraclefeet first started in Brazil, doctors trained in the Ponseti method found it difficult to implement because they didn’t have the support of their hospitals, and patients often could not afford the brace and subsequently dropped out of the program. So the nonprofit developed partnerships with hospitals in Brazil, finding it was more effective and sustainable to integrate into a country’s existing public health system to get the program going.

Usually it’s not hard to convince health ministries that by providing the treatment, they’re creating more contributing members of society, said Colloredo-Mansfeld. But some countries, such as Ecuador, don’t allow nonprofits to work with public hospitals.

“They don’t want outside interference in their hospitals. It’s unfortunate because the hospitals don’t really have the capacity to treat the population,” she said. But there are workarounds. Miraclefeet collaborates with other local child-focused organizations and non-federal government hospitals that serve poor areas.

In other places like India, where thousands of clubfoot sufferers are reduced to begging in the streets, the treatment is taking off under miraclefeet’s partnership with CURE International India, which provides medical training, clinic counselors and free foot braces for children.

“Our goal is just working in developing countries but very much with the idea of building local capacity,” Colloredo-Mansfeld said. “We only work with local doctors building clinics within orthopedic or physical therapy departments of hospitals so that at some point we can phase ourselves out and the program will still carry on and kids will still get treated.”

Miraclefeet taps into a network of doctors educated in the Ponseti method to train others. In order to keep track of patients in the program, all doctors are required to use the international clubfoot registry — an electronic medical database — to monitor cases. 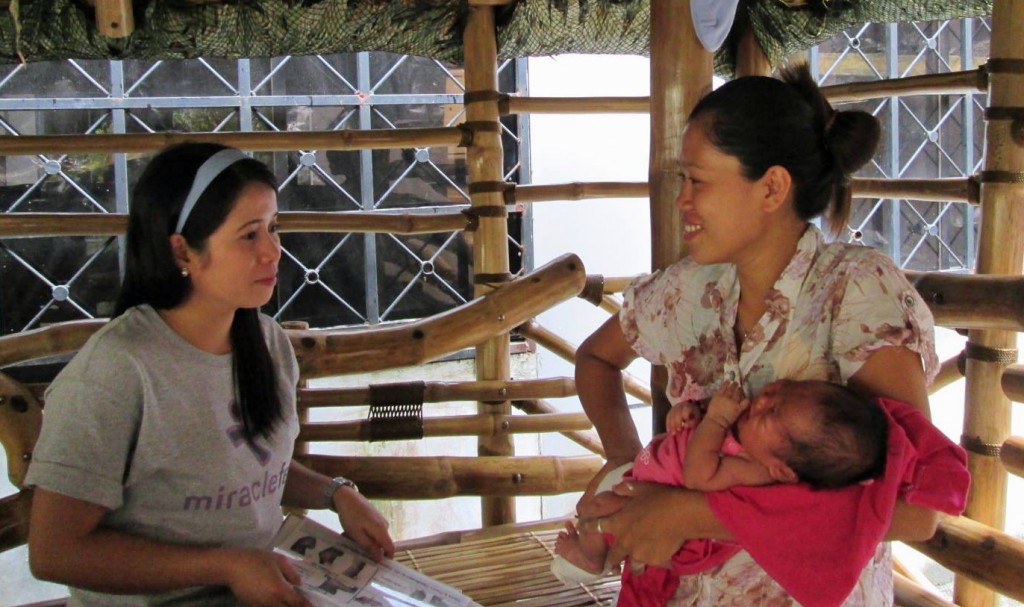 A counselor speaks with a mother at one of the clinics in the Philippines. Photo courtesy of miraclefeet

The group also provides a clinic assistant who educates parents about the procedures and the need for their children to continue wearing the braces.

Just as a child who has had braces on his or her teeth must wear a retainer at night, clubfoot patients also must continue using their foot braces at night for four years to maintain the correction, especially young children still experiencing growth spurts, said Colloredo-Mansfeld.

“It’s really up to the parents,” she said, and the clinic assistant is the one who keeps reinforcing that message.

In most countries, the government doesn’t supply the braces, which can cost $100 to $1,000. Miraclefeet worked with Stanford University and corporate funders to develop a cheaper version costing $20, which the group gives to children for free.

Since miraclefeet began, it’s enrolled more than 10,000 children in the treatment program, about half of those in the last year alone.

“This program is growing very fast,” said Colloredo-Mansfeld, and she intends to increase the number of cases within their current countries as well as expand to new countries as funding allows.

The message to families is: clubfoot is not a big deal, it’s curable and this is where you can get help, she said. “How can we deny a child that right, given how easy it is?”

Left: Clubfoot is a common congenital disorder of the legs in which the bottoms of the feet turn sharply inward. The Ponseti method involves a series of plaster casts and foot braces. Photo courtesy of miraclefeet