Chile’s Mine Rescue: Costs and Benefits 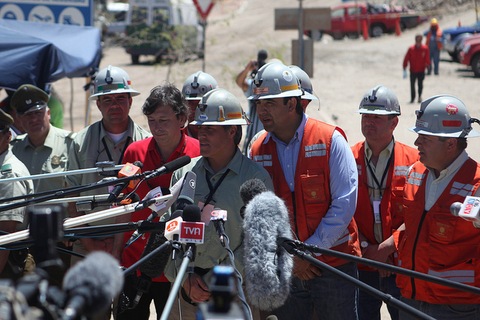 Chile mine rescuers. Photo by Hugo Infante/Government of Chile

The complicated mission to save 33 men from the collapsed San Jose mine near Copiapo, Chile, which ended successfully Wednesday night, will cost an estimated $10 million to $20 million, according to Chilean President Sebastian Pinera.

“Every peso was well spent,” he said.

A third of the cost will be covered by private donations with the rest coming from Codelco, the state-owned copper company that led the rescue effort, and the government itself, reported the Associated Press.

Some of the help was donated, such as technical assistance from other mining companies and a four-person NASA team, drinks from commercial companies, and the Oakley sunglasses each miner wore to readjust to bright light, which had an estimated retail price tag of $450.

The miners will get to keep the sunglasses as well as other gifts, which reportedly include new iPods, $10,000 each from a local businessman, and trips to see soccer games, along with proceeds from book deals. One miner, Edison Pena, an Elvis fan, was offered a free trip to Graceland in Memphis.

Media organizations also spent a pretty penny. BBC, which provided live 24-hour coverage of the mine saga, reportedly spent more than 100,000 British pounds (about US$158,000), which could squeeze coverage of other events including the Cancun climate summit and Oscars.

In all, more than 1,000 journalists from 40 countries participated in the on-site wall-to-wall coverage.

But beyond the dollar cost, some analysts say the positive light on Chile is invaluable.

“If you have to have the spotlight on you, this is not a bad way to do it,” Beatriz Manz, a professor of Chicano/Latino studies at the University of California at Berkeley, told the NewsHour. “Chileans know that. They feel no one knows who they are, what the country is beyond the bottles of wine.”

“This case shows a very good example of a mine earning a lot of money, yet they didn’t have stairs for an emergency. Much more than laws and supervision, it’s something about ethics,” he said.

Pinera himself said from the site of the mine rescue that he hopes from now on, when people hear the word Chile, “they will not remember the coup d’etat or the dictatorship, they will remember what we’ve done (here), all the Chileans together.”

Watch for more on what’s next for Chile on Thursday’s NewsHour.