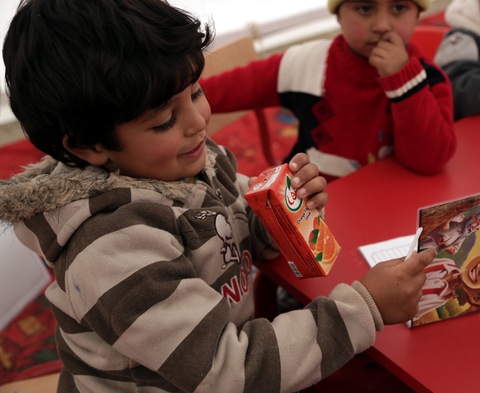 A Syrian kindergartener in a Jordan refugee camp. Photos by Nicole Itano for Save the Children.

The number of Syrian refugees escaping to neighboring Jordan has surpassed 400,000 with thousands more arriving each day. Many of the refugees are children, who normally would be in school but instead are hunkering down in refugee camps.

International aid agencies and community groups are racing to create enough tent classrooms to accommodate them all.

“Some of the children have been out of school for months and months,” said Michele Servadei, deputy representative for UNICEF Jordan. So his organization and others, including Save the Children, are facilitating the creation of temporary classrooms to help the children catch up.

So far, there are two main schools in Jordan’s Zaatari refugee camp and a third one in the planning stages. Each school can hold about 5,000 students, though the demand keeps growing.

“We need to open the third school quickly,” Servadei said from Jordan. 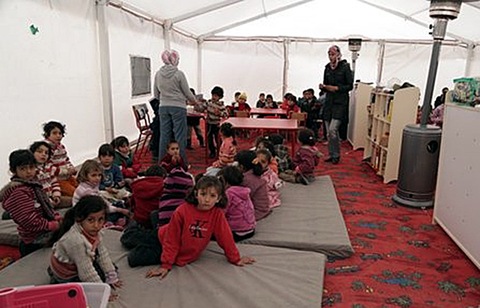 Kindergarten classroom of Syrian refugees in Zaatari camp in Jordan.

Because Syria is a middle class country with a generally well-educated population, the aid groups can recruit teachers from within the refugee population. Some recruits already were teachers in Syria, but those who weren’t can be trained along with the other Jordanian teachers, said Servadei.

Both sets can contribute: the Syrians have expertise in dealing with Syrian children, and the Jordanians have the more formalized education training, “so it’s a good combination,” he said.

One of the issues that sometimes comes up is the potential for bullying between the refugee and host communities, Servadei said, so parent-teacher associations are organized to be on the lookout.

The refugee students are taught science, math and life skills and vocational training. One of the few deviations from the Syrian curriculum is that in Jordan, the students learn English as opposed to French in Syrian schools, he said. 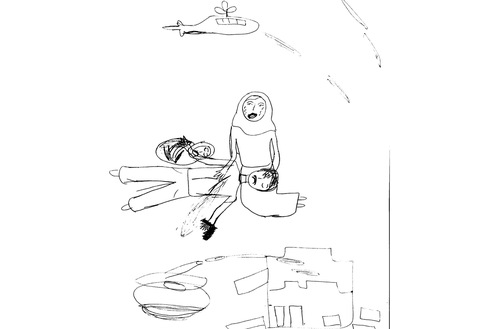 Drawing by Syrian refugee. Click on image for a larger version.

One program, geared particularly for young children, lets the refugees express their feelings about the violence they witnessed through art. “The drawings can be pretty tough to look at, but it does help kids get through that trauma that they have experienced,” said Carolyn Miles, president and CEO of Save the Children.

As the fighting in Syria between pro- and anti-government forces continues, the refugee population in Jordan alone is estimated to reach 700,000 by July, she said. (The U.N. refugee agency keeps track of the numbers on its website.)

And among that refugee population, many feel a strong desire to learn, Servadei said from UNICEF’s office in Jordan. At the beginning of the year, he cited as an example, a snowstorm hit and more than 1,000 parents and children chose to live in the schools during the winter break. “They’re really eager to learn. We need to make sure we can increase the capacity” to accommodate them, he said.

On Friday’s PBS NewsHour, we’ll have more on the humanitarian situation within Syria (updated with link). View all of our World coverage.