In War Zones, Education Takes a Backseat to Other Needs 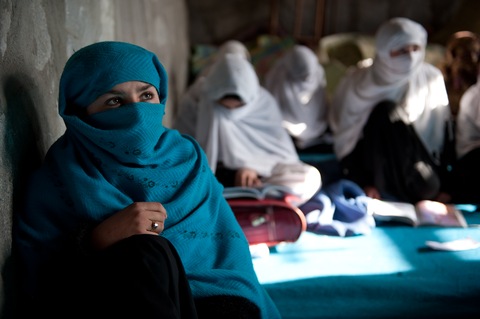 Education is often another casualty in countries wracked by violence, a recent U.N. report found, as more immediate needs such as food and shelter take priority. But some aid groups say education should be viewed with more urgency as a means to stabilize war-torn places.

A report released Tuesday from the U.N. Educational, Scientific and Cultural Organization (UNESCO), “The Hidden Crisis: Armed Conflict and Education,” highlighted the scope of the problem.

An estimated 28 million children (or 42 percent of the world’s total) were unable to attend school in war zones, the agency found. And aid is lagging: Education funding “has stagnated” since 2007, and in sub-Saharan Africa fell in 2008 by about 6 percent per primary school-age child, according to the report.

Part of the problem is that governments, even in the U.S., view food, water and shelter as the initial response to emergencies, and education as secondary, said Heather Simpson, senior director of the Department of Education and Child Development at Save the Children.

Education instead should be considered an integral element of that emergency response, said Simpson. “Providing education, providing safe places for children to go during conflict after emergencies helps normalize the experience for children. They are in a safe place. The teachers who are trained to deal with psychosocial issues during conflicts can better support these children, and less long-term damage is suffered by these children,” she said.

But not just any education is needed. The U.N. report pointed out that certain types of education can fuel violent conflict if they “reinforce social divisions, intolerance and prejudices that lead to war.”

Simpson said Save the Children tries to address the quality of education — not just access to it — by working with communities and teachers to increase their skills, in ways such as decreasing the use of corporal punishment and training more female teachers in male-dominated societies.

In Afghanistan, for example, only about 28 percent of the teachers are women, said Simpson. Because of cultural practices, having a male teacher decreases the likelihood of girls going to school, so training more female teachers means more girls can go to school and don’t have to travel as far to get to girls’ schools, she said.

Tapping the “local talent” is one of the keys to creating long-term, sustainable education opportunities in conflict-ridden countries, continued Simpson.

Rather than foreign workers swooping in and out, the people helping at the community level are often from those communities or from local organizations, which develops trust and fosters a long-term solution, she said.

In once such case, when the government of northern Sudan demanded all non-government organizations leave, Save the Children tried to compensate by channeling resources through its Swiss team. They were allowed to stay because they were considered neutral. But because of the limited resources on the ground, they couldn’t implement all of the work that needed to be done, Simpson said.

“It’s taken some years to negotiate, and we’re slowly making progress to get our activities up and running again,” she added. “But it is very challenging.”

Another key tactic to addressing the needs of children in conflict-affected areas is targeting children even younger than school age with early stimulation, language and reading skills.

“Getting children ready to learn and addressing their needs at early stages ensures that their long-term learning prospects are there,” Simpson said.

This story is a new feature of our World page that takes a closer look at news we either missed or lightly reported on earlier in the week. Send us your ideas for other “stories we missed” @NewsHourWorld.